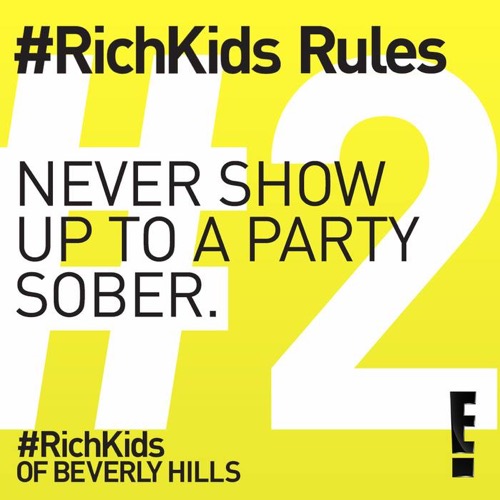 Tonight on E! Rich Kids of Beverly Hills continues with an all-new Sunday, June 12, season 4 episode 7 called, “#BacheloretteBlowUp,” and we have your recap down below.  On tonight’s episode Dorothy Wang has second thoughts about being a bridesmaid for Morgan Stewart after hearing what Morgan allegedly said about her.

On the last episode, while on his bachelor party in Cabo San Lucas, Mexico, Brendan confided in Jonny and struggled with Morgan’s decision to write a book revealing her wild past.  Did you watch the last episode? If you missed it, we have a full and detailed recap right here for you.

On tonight’s as per the E! synopsis, “Dorothy has second thoughts about being a bridesmaid for Morgan after hearing what Morgan allegedly said about her. Unable to keep mum about it, Dorothy chooses Morgan’s bachelorette party in Miami to confront the bride-to-be, who then ends up in a blowout with Bianca.”

Morgan and Brendan are picking out wedding bands. Brendan asks her “Which one would you want in the moment?” Morgan picks out a white gold wedding band. When it comes Brendan’s time to choose he chooses a simple gold band. The jeweler asks them about their bachelor and bachelorette parties. Brendan tells him that he and his friends went to Mexico and Morgan tells him that she and her friends are going to Miami.

Morgan is talking to EJ and her bridesmaids about her bachelorette party. EJ says “I have never been to a bachelorette party.” Dorothy is not excited to be there at all. The girls split up and Dorothy and EJ go with the group who is helping to set up for the surprise party. Meanwhile Morgan is talking to Zara about what is happening with Dorothy. Morgan tells her “I can feel the tension between us. ” Zara tells her “If it continues then confront her about it, but not in a mean way. ” Morgan says “Cheers to a great weekend and not being aggressive.” Zara agrees.

Everyone meets up to have breakfast the next day, but Dorothy is still upset. She says “Although I have a lot to say to Morgan I know that now is not the time. I am going to simply paste on a smile and go with it. ” The scavenger hunt begins with Morgan captaining one team and Dorothy captaining the other. Dorothy says “I am definitely not going to let Morgan win just because it is her bachelorette. “

Jonny and Brendan head to the Drs. office to get Botox together. Brendan says “I am getting Botox in my armpits because I don’t want to sweat through my tuxedo shirt and jacket.” Jonny asks Brendan “Do you want to hold my hand?” Brendan says “No.” He is breathing heavily and deeply during the procedure. Jonny tells him “Relax.” Brendan responds “The armpit is a sensitive area.” When they are done Brendan laughs feeling relief and they leave.

At dinner EJ brings up the conversation between Bianca and Dorothy. Dorothy tells them “Bianca apologized and told me that she would never do anything to hurt me. I have been having a lot of distress and hate lately.” While everyone is in the hotel room a stripper disguised as a pizza guy shows up along with a police officer. Morgan is a bit mortified by this because she did not think that there would be strippers. Everyone is having a great time until one of the guys drops Morgan.

Dorothy asks Morgan “Can we go upstairs?” When they get up there Dorothy tells her “I didn’t want to bring it up during dinner because it wasn’t everyone’s business. I heard what you said about me. Bianca told me. Even when she told me I tried to defend you.” Morgan tells her “I can genuinely tell you that I am really, really sorry.” Dorothy tells her “I don’t know where we go from here. I want to be able to stand up for you and be your bridesmaid, but I don’t know if I can. ” Morgan tells her “I understand and you take all of the time you need.”

After the conversation Dorothy to calls Bianca. Bianca asks “Did she admit to what she said?” Dorothy tells her “Yes and she was really apologetic about it.” Dorothy says “It feels weird now that I have confronted Morgan being here to celebrate her bachelorette.” Bianca tells her “If you want me to come to Miami I will. I will walk into her bachelorette and be like ‘sup?” Dorothy tells her “Everyone else is leaving tomorrow, but EJ and I are staying an extra day. Would you like to come up?” Bianca agrees.

Morgan calls Brendan and tells him about the confrontation between her and Dorothy. Brendan tries to cheer up. Morgan says “I really realize that Dorothy was devastated by what she heard and I never want to make my friends or anyone else feel that way.”

Dorothy is headed over to see EJ. She is still conflicted about the situation with Morgan. Dorothy says “I’m hoping that talking with EJ will give me some perspective.” EJ tells her “I know it’s ugly and I’m not trying to push it under the rug, but I can’t imagine it coming from a place of hate. I have watched the two of you grow in your friendship.” Dorothy tells EJ that Bianca is coming to Miami. EJ is appalled and says “Not this weekend.” Bianca asks EJ if she should tell Morgan. He tells her “She does have a right to know. This is not going to go well.” Dorothy agrees and says “Maybe we didn’t think this all the way through.”

Morgan and EJ are talking. He asks her “Are you and Dorothy going to be ok?” Morgan says “I have a lot of making up to do for it.” EJ tells Morgan ” When I was talking to Dorothy she mentioned that Bianca was going to come down here.” Morgan says “This is not the right time, but if she wants to we can do it.”

Bianca and Dorothy meet up to have dinner. Bianca tells her “I don’t think you should stand up for yourself and not go to Morgan’s wedding.” Dorothy says “I think that Bianca is disappointed that I didn’t end my friendship with Morgan.” She tells Bianca “I don’t understand why my friendship with you depends on me and Morgan fighting.” Bianca tells her “Our friendship doesn’t depend on that. I just wish you could stand up for yourself more.”

As the two are talking Morgan walks in and sits down at their table. She smiles at Bianca and tells her “I am so glad you could make it to my bachelorette party.” Morgan tells her “If you have something to say about me then you come and say it to me.” Morgan tells her “I don’t know why you have to meddle in me and Dorothy’s friendship, but keep my name out of your mouth.” The two women continue to argue and eventually Morgan leaves. Bianca turns to Dorothy and says “That’s who you’re friends with.”