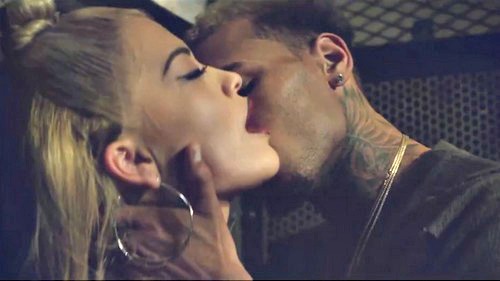 The Rita Ora and Rihanna feud is about to get a whole lot nastier as Chris Brown is dating Rita! It’s no secret that Rihanna and Rita are not pals – it’s unclear when exactly the women began hating each other, and there are different versions of the story, depending on who you ask.

Supposedly, the feud began because Rita was jealous of Rihanna’s success, Rihanna was jealous of Rita’s music video with her ex Chris Brown – and the final straw was when Rita Ora filed a lawsuit against Jay-Z’s label Roc Nation. And, we can definitely confirm that the feud won’t be dying down any time soon.

Rita Ora took to SnapChat over the weekend and confirmed that she is dating Rihanna’s ex Chris Brown! Ora quickly deleted the SnapChat post, but according to Media Take Out and other sites, Rita posted a photo of herself and Chris “huddled up together” and captioned it “BAE” – then she quickly deleted it, but not before tons of people saw it.

There have been rumors floating around for months that Chris Brown and Rita Ora were hooking up, the and Rita has confirmed it. But, why did she take the video down almost instantly after posting it – did Chris Brown make her? It sort of looks like Rita wants the world to know she is hooking up with Chris, but Chris is trying to keep Ora his dirty little secret.

Regardless, one thing is for sure – Rihanna is not a happy camper right now. If Rita and RiRi’s feud was fictional before, it is probably 100% real now. Then again, rumor has it that Rihanna and Drake are hooking up again, so maybe she was too busy with her new music video co-star to notice Rita’s brief SnapChat video with Brown.

What do you guys think? Are Rita and Chris Brown really dating? Or did Chris make Rita take down the “BAE” video? Let us know what you think in the comments below!