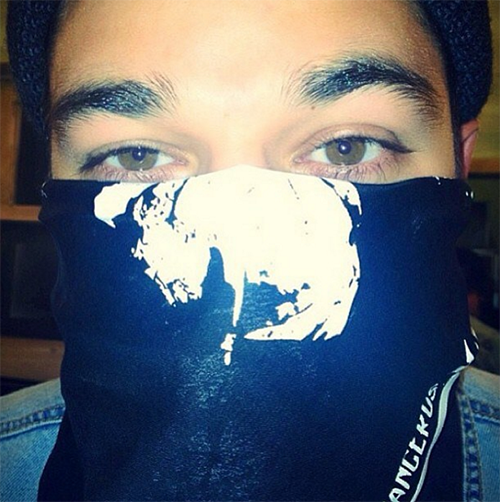 It looks like Rob Kardashian posted a selfie on social media to grab some attention. Rob Kardashian hasn’t been putting himself out there much lately. He’s pretty much gone from reality star to recluse. He seemed to be competing with sister, Kim Kardashian, with packing on the pounds; the only different is that he wasn’t the pregnant one. Now, Rob Kardashian is facing the fight against diabetes.

Perhaps Rob has had enough time hiding from the spotlight and he is ready to have the attention of the world at his fingertips again? Could that be the reason that Rob took to his Instagram account to post the above selfie in the wee hours of the morning on January 20? What’s with the scarf covering his face? Has Rob decided he is too embarrassed to show his face all the way now? Is this just to get us all talking? I guess it’s working! Rob didn’t even put an actual caption in the post, he just included two emojis… the purple little devil ones. A tad bit odd. Translation anyone?

To make things even more confusing, Rob deleted every single one of his past posts, making this picture his one and only. Is he looking for a new beginning?

On January 18, Rob Kardashian gave his first ‘sign of life’ on Twitter by re-Tweeting this statement, “If it’s meant for you, you won’t have to beg for it. You will never have to sacrifice your dignity for you destiny!”

Hmmmm, that’s an interesting statement. What exactly does he mean by it? We shall have to wait and see if Rob Kardashian makes a real comeback – not just on the show Keeping Up with the Kardashians, but in life. Let’s just keep him and Scott Disick apart, and I think that we may have some hope for Rob. His fan base is giving him a lot of positive love and support, so let’s hope that he will get his act together and quit feeling sorry for himself and get control of his own health and life.

What do you CDL readers think about Rob’s random photo and social media action? Will we be seeing more of this? Or will Rob snap out of it and get his life back on track? Sound off in the comments below!