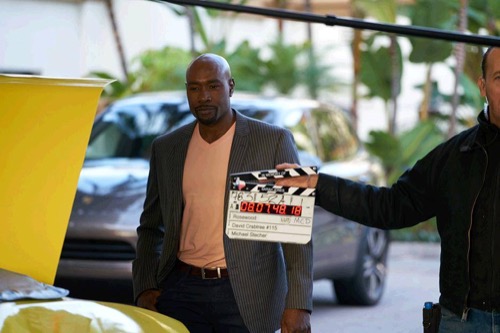 Tonight on FOX Rosewood airs with an all new Wednesday March 30, season 1 episode 15 called, “Atherosclerosis & the Alabama Film-Flam” and we have your weekly recap below. On tonight’s episode, Rosewood (Morris Chestnut) goes to a convention for forensic pathologists in another city and inadvertently describes how to commit the perfect murder in a speech.

On the last episode, Joo Joo was a prime suspect in Rosewood and Villa’s next case, and they discovered a side of their informant they never knew existed, even though he might have had to go to jail for the rest of his life. Did you watch the last episode? If you missed it, we have a full and detailed recap right here for you.

On tonight’s episode as per the FOX synopsis, “while at an out-of-town forensic pathology convention, Rosewood unintentionally reveals the blueprint to commit the perfect murder during a speech to the convention attendees. Tormented, and armed only with a hunch, Rosewood enlists Villa to help solve the crime, and while investigating undercover, sparks fly unexpectedly between them. Hornstock and Floyd Butters are called upon for extra help. Meanwhile, Pippy and TMI have locked themselves in the lab overnight to help with the investigation and TMI receives an unexpected visit from her estranged father.”

Apparently there’s such a thing as being too helpful on tonight’s episode of “Rosewood”. Dr. Beaumont Rosewood Jr. had gone to an out of town conference that was supposed to be on forensic pathology, but unfortunately he had gotten a little carried away with his keynote speech. The interesting speech, itself, had been about the perfect murder and how easy it was to kill someone by faking something called atherosclerosis. Yet Rosewood had no idea that he would wake up the next morning and suddenly find someone had just died of the same heart attack that he had once claimed could be faked.

So naturally that had raised some internal alarms though there was nothing Rosewood could do. Dr. Wambach who had been a fellow pathologist had been found dead in his hotel room of an apparent heart attack and no one had wanted to question that. But Rosewood suspected something a little more nefarious. He thought that someone had used his “blueprint” for the perfect murder and that would therefore mean that Wambach’s death was directly his fault.

And so Rosewood then realized he had to investigate Wambach’s death whether the local police were willing to listen or not.

Though, Rosewood was luckily able to at least depend on his good friend Villa. He had later called her for help and she hadn’t even hesitated. She simply took his assumption as the truth and drove down to the conference to see what she could do. Although it wasn’t much. The same police that had wanted to exclude Rosewood from Wambach’s autopsy had also wanted to do the same to Villa. Who they believed was acting outside of her jurisdiction.

Which was true, but that hadn’t wanted to hear her reasoning or let Rosewood explain why he didn’t think Wambach’s death resulted from a heart attack. The local police just wanted to believe they had an open-shut case and it didn’t help that the victim has had two heart procedures in the past couple of years. Implying that Wambach di have troubling heart issues.

Yet, Rosewood had felt so sure about this one that his people decided to go rogue for him. Pippy and Tara had looked in Wambach from their end and surprisingly Hornstock and his old friend who happened to be a retire detective showed up at the hotel in order to help Villa split up the suspects. There had been Dr. Kipley Reed who had always been a bit of a show-off at such events and so he viewed Wambach as natural competition. And there had also been a call girl.

The call girl had been caught on security cameras entering Wambach’s room on the night before his body was found. So she was the last one to see the victim alive. Though for a call girl she ended up having a lot to say about Reed. Who had apparently once worked with Wambach before they had a huge fight.

However, back in Miami, Tara had a run-in with her father. The same father that had sided with her mother two years ago in cutting her off and ignoring her phone calls. So Tara hadn’t exactly been in a mood to forgive her dad when he finally realized that she was still his daughter and that her being gay shouldn’t change that, but Pippy had walked in on the end of their conversation. And she had wanted to know what “money”?

Tara it seems had gotten a check from her mother a while back and technically it supposed to induce her into changing her job because people in their family shouldn’t be working around the dead. Yet, Tara had turned down that money. She hadn’t wanted it and she still didn’t so she had gone to pretend the conversation hadn’t taken place. And that included hiding it from her fiancée who was left wondering why. Why didn’t Tara think she could trust Pippy with the truth?

Only back at the never-ending conference, Rosewood and Villa had gone to dinner with Reed and his wife. Though they couldn’t find a single thing that made them think Reed was their guy. So instead of getting out of their dinner as soon as possible, the two remained at the table and actually ended up enjoying themselves as a fake a couple. That for a second they had nearly convinced themselves that they could be more than partners and friends.

And thus there was scene during tonight’s episode where it looked as if Rosewood had wanted to go to Villa’s room and vice versa. But she had stayed put because she hadn’t wanted to cross that line and eventually she came to congratulate herself for not going to Rosewood’s room. Especially as she later heard another woman go in there and stay overnight.

Although that particular woman had been Rosewood’s doctor. Dr. Erica Kincaid had been running after Rosewood to get a new blood sample and he had basically been holding her off while he worked Wambach’s death. So Erica ended up going to him at his hotel room and incidentally she soon fell asleep after running him through his blood work. And as there was some flirting, she did seem to be interested in Rosewood as more than her patient though she had been strictly professional with him in his hotel room.

So there was nothing for Villa to worry about, but she did put up some walls between her and Rosie afterwards.

Nevertheless, though, Villa and Rosewood still continued working the case and they did in the end get the medical examiner to allow Rosewood to view the body. And not that surprisingly he found murder. There had been a scar in the victim’s throat that meant someone had stuck something down there when he was too weak to fight back and that object had been a piece of ice. Ice naturally melts so the killer thought that would be the perfect weapon over the broccoli that Rosewood had described in his speech, but it left behind burned marks in the throat. And so Villa was able to arrest Casey Reed. Casey was Kipley’s wife and apparently she had gotten tired of him getting overlooked in favor Wambach so she killed the competition in order to get her husband a promotion. A promotion, by the way, that would allow them to stay in the city rather than move to Portland.

So Casey was arrested and Rosewood was able to finally close the case. But he had noticed Villa’s behavior and he had tried to tell her about his feelings for her when she stopped him. She said they did a good undercover job as a couple yet she didn’t want to talk about the real elephant in the room.