Rosie Huntington-Whiteley and Jason Statham Are Engaged and Pregnant? 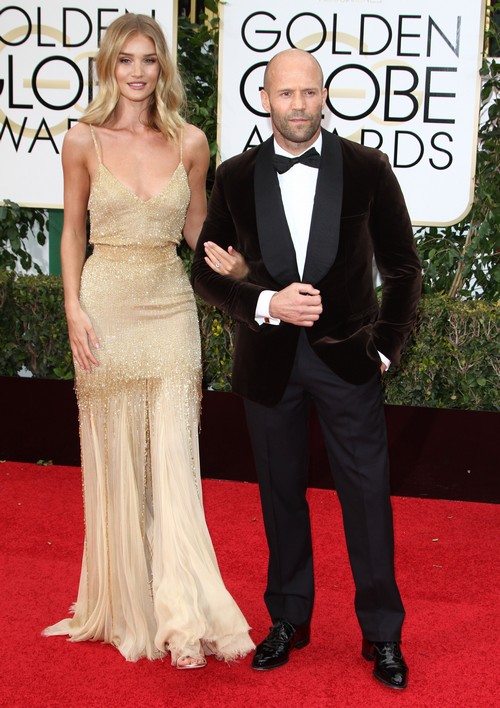 The gorgeous couple were beyond stunning on the red carpet at the Beverly Hilton Hotel for the 73rd Annual Golden Globe Awards that were hosted by the one and only Ricky Gervais. Rosie Huntington-Whiteley dazzled in a beaded Atelier Versace dress that only enhanced that giant rock on her tiny ring finger.

Jason Statham looked hot, as always… seriously… when does he look bad? The answer to that is, never. The Expendables stud wore a classic black and white tux. Love that clean looked and that rugged man. Yum.

This sexy pair met on the set of Transformers back in 2011 and well, we are really glad that they did because looking at the two of them together is eye candy you just don’t see everyday. Jason Statham popped the question while they vacationed in Thailand for the New Year holiday. Perfectly romantic setting… the guy knows what he’s doing.

So will we be hearing the pitter patter of little feet before we hear their wedding bells? From the sounds of Rosie Huntington-Whiteley’s idea of the future that she shared with Self, I’d say that there is a really good chance of that,

“For any couple that’s been together for a certain amount of time, there’s a massive amount of pressure to get married. I totally believe in marriage, but being in a happy relationship is much more important to me … [Kids are] something that’s more realistic in the near future.”

The timing couldn’t be more perfect. The mother to be (sooner than later) has Mad Max out of the way and no new movies to focus on at the time, so she is free to get to that baby making. As for Jason Statham, he has three projects on tap for us in 2016 so far: Viva La Madness, which will be a TV series, he just finished filming Mechanic: Resurrection, then of course the upcoming Furious 8. I am sure he will find time for making a baby in between those commitments!

Stay tuned to CDL for a baby bump announcement!