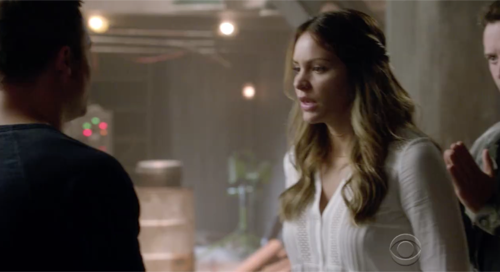 Tonight on CBS their hit drama/comedy Scorpion airs with an all-new Monday, November 21, 2016, episode and a new time-slot and we have your Scorpion recap below!  On tonight’s Scorpion season 3 episode 9, as per the CBS synopsis, “Paige’s (Katharine McPhee) estranged mother enlists the team’s help when she accidentally uncovers a forgotten nuclear reactor that’s on the verge of exploding.”

Sly is larping with his wizard and night friends for votes. He sends them on a mission to promote him and needs them to get it done quick because he needs to be home to set the table for Thanksgiving! Cabe shows up and wants to know what he’s doing. Soon after, Toby shows up and gets caught supporting Sly’s competition while Cabe flirts with the campaign manager of Sly’s competition.

Paige and Happy are preparing Thanksgiving dinner with Ralph. Happy has invented a bread cutter that toast the bread as it goes through the loaf. Meanwhile, Walter and Tim are hanging out. Walter is testing his new sports drink on Tim was working out they show up at the warehouse with him all sweaty, grossing out Paige

Walter takes a call it’s a job. Paige is mad because it’s Thanksgiving but they all agree they need the money. Walter assures Paige that the job is going to be quick and will only take a couple of hours.

The team arrives at the warehouse to do the job when they greet the woman that called Walter they discover that it’s Paige’s mother. Paige’s mother apologizes up-and-down she said she represents first bankers that bought the warehouse and she needs team scorpion help page is reluctant because she knows her mother is a liar.

Paige declares that she is the manager of the team and she does not want to take this case until a Happy tells her that in the back the warehouse there is a nuclear reactor.

The team determines that the reactor was illegally spliced as they look at over the warehouse begins to fall apart. Falling pipes could easily cause the reactor to go off.

Because it is Thanksgiving inspectors to help them with the reactor are out of town two hours away scorpion has to do something now to fix this before it explodes.

Page confides in Toby, telling him that her mother is a convict who has conned people out of money.  She was in and out of jail during Paige’s childhood.

Meanwhile the team finds with the can in the warehouse to elevate the nuclear reactor. Just as Happy grabs the jack, she realize it is broken!

While Walter and Tim hold up the reactor, Cabe and Happy find a barrel and a pipe to create a seesaw. Happy tells Cabe to lay across the bar to put all of his weight down. She runs and jumps from the other side of the room on top of Cabe and manages to move the reactor. Toby comes in and finds them in a compromising position as Happy is laying on top of Cabe and wants to know what’s going on!

The team loads the reactor into the back of the truck to bring it to a safe place. Paige thinks that her time with her mom is over but the truck is a standard and her mom is the only one that knows how to drive it. They drive as slow as possible while Sly finds the flattest and quickest route.

Meanwhile,Tim, Happy, Cabe and Walter are all in the back of the truck keeping the reactor in place and steady. While they drive across the golf course, balls hit the truck. Scared that the balls could make the reactor go off, Toby hangs outside acting like a human pin yada to protect the disconnect box.

Suddenly the truck is being shot at as he gang in the back tries to keep the reactor steady. Remotely Sly controls the traffic lights and the gates so that they can get away. A GPS kill switch on the truck brings them to an abrupt stop.

They need to drain the reactor because they can’t get it to safety. Cabe commands that a churro vendor give them his cart so that they can siphon the chemicals from the reactor into the oil used by the cart.

Right down the street there’s a parade going on when they see a massive superman float Cabe has quick thinking once again they use the float to lift the reactor. It works! Together they all seat down for Thanksgiving dinner, Paige’s mother included who finally meets Ralph.