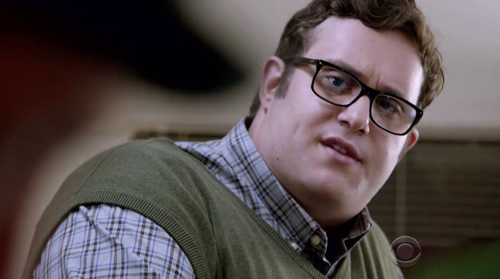 Tonight on CBS their hit drama/comedy Scorpion airs with an all-new Monday, December 12, 2016, episode and we have your Scorpion recap below!  On tonight’s Scorpion season 3 episode 10 as per the CBS synopsis, “Walter’s (Elyes Gabel) forced to swim through the deadly La Brea Tar Pits in order to save a woman who’s trapped in the tar before she runs out of oxygen.”

A woman trying to avoid hitting a biker at night runs into a fence and right into a lake. She can’t get out of the car and…the swamp lord is back. The gang is hanging out for a movie night with Ralph. Tim is out of town. Walter offers Paige chocolate covered peanuts with popcorn. Toby talks to Walter on the side and asks him why he chose a horror knock-off. Toby knows he is trying to win Paige.

Paige’s mother comes in. She is living in the camper temporarily. Paige’s mom runs over to Walter when no one is around. She was the one that gave Walter the idea so he could win Paige over. She gives Walter more tips.

Ralph is trying to earn his business badge. Grandma has a different business plan in mind – she wants to turn a profit. Meanwhile, Sly and Cabe are having their own business problems with Sly’s campaign.

A call comes in. Scorpion is needed at the scene of the woman who plunged into a tar pit. At the scene, the gang is told that the woman is in a small sedan 30 ft down and she can still use her phone. She has 30 minutes before she runs out of oxygen. The captain wants to drop a hook down, but Happy thinks this is a bad idea. She wants to drop a bungee and slowly pull it out.

Tim returns. He failed his physical. He is in terrible spirits now that he will be honorably discharged. Paige comforts him. He wants to work the case. He doesn’t want to talk about it.

The lady in the car is told to use what she has in her car to preserve her oxygen. She finds athletic tape to seal the windows.

Tim offers up himself to go down in the tar and save her. Paige isn’t happy that he is going to take the plunge. Walter volunteers himself. It’s him or the woman dies.

Walter suits up to go down into the pit. Paige is noticeably upset. The gang watches Walter’s progress by camera. He is moving very slowly. Toby cracks some jokes. The gang tries to comfort the woman in the car. They need her to conserve oxygen in the car.

Walter has to take off his glove. The gang gets anxious. He is risking getting burned.

After plugging a hole in the car with his glove he makes his way back up and onto land. The gang tries to come up with a new plan to save the woman in the car.

Meanwhile, Ralph and his grandmother are making a lot of money using her sketchy marketing scheme. He wants to tell his mother all about it, but grandma doesn’t think that’s a good idea.

Walter gets dropped down into the tar with a syringe of salts that will wake up the woman in the car. Walter needs her to hold her breathe so that they can get her out of there.

During the rescue, Walter unhooks the cable to save her. He is stuck down there. He answers them with only 2 minutes of oxygen left. The team tries to come up with more ideas to save him.

Ralph and his grandmother are still selling ice cream. They check social media and Ralph sees Cabe commandeering a vendor for salt supplies. A comment Ralph makes gives the team and idea to melt the tar.

Tim’s commander calls with a job offer in Jordan. Tim thought this opportunity was something that would never happen again for him after getting discharged. He doesn’t want to go though, he wants to talk to Cabe and make his position permanent with Scorpion.

Ralph and his grandmother count their money. They made a large surplus. Ralph tells her that his mom was right. She is a scammer. Paige’s mother tries to cover up her wrong doing by saying the extra money is for Sly’s campaign.

Walter talks to Paige about her mother. Paige can’t handle the dishonesty. She doesn’t know what she is going to do.