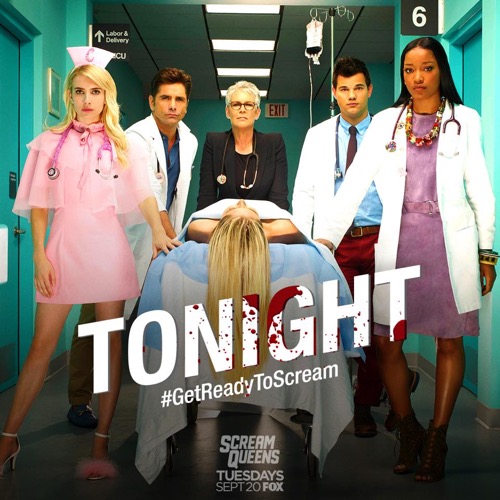 Tonight on FOX their comedy-horror series Scream Queens airs with an all-new Tuesday, September 20 episode and we have your Scream Queens recap below!  On tonight’s Scream Queens Season 2 premiere, secrets from the hospital’s past begin to reveal themselves and a new killer surfaces.

If you have never watched the show before Scream Queens, season 2 graduates from the college campus and into an all-new location, as a terrifyingly funny murder mystery will begin once again. This time, the show will be set in a hospital, where some of the most fascinating and bizarre medical cases are under observation.

On tonight’s Scream Queens premiere as per the FOX synopsis, “Years after the murderous events at Kappa House, Dean Munsch purchases an abandoned hospital under the guise of fixing the healthcare system in America. After recruiting surgeons, Dr. Brock Holt and Dr. Cassidy Cascade, as well as medical student Zayday Williams, the Dean shocks everyone when she enlists the services of the disgraced Chanels to join the ranks at the teaching hospital.”

There was an incident some years ago. Unfortunately, a young couple had been at the hospital when they were having their annual Halloween part and so no one on staff wanted to treated the husband. The husband apparently couldn’t breathe so his wife had demanded that someone check on him and, when she saw that she wasn’t getting a response from anyone, she threatened everyone by saying report them all for negligence. So one nurse had called a doctor aside to see the young woman’s husband and he had said that the husband needed immediate surgery. But that poor never received care.

The doctor at the time had really wanted to go back to the party. So he told the wife that he was going to perform surgery and instead took her husband out to the dirty swamp like pond in the back. However, the nurse that had seen everything had said what they were going to do about the wife and the doctor claimed that all they had to do was deny ever seeing the woman’s husband to begin with. That way the wife looked irrational and the police would think that husband ran away because he couldn’t handle becoming a father. And so with behavior like that from the staff, it was no surprise that Dean Cathy Munsch eventually was able to buy the abandoned hospital where this incident for a steal.

Yet, buying a creepy hospital with history wasn’t the strangest thing that Munsch ended up doing. Munsch had turned her whole life around and had become a New Feminist spokesperson when a s slight scandal meant she had needed to do something big to distance herself from it. That scandal though was a Netflix Special. Netflix had created a documentary on the Kappa Murders and it had revealed the truth about the Chanels. Like how they were innocent and the real serial killer was still out there and free. So the police had eventually ordered a new investigation and it hadn’t taken much for them to get the truth out of Hester.

Hester had apparently been confused about Double Jeopardy so she thought that she could admit to what she did and not be arrested for it. Though Double Jeopardy only comes into play for someone whose been tried once before because that’s why they can’t be tried twice. So Hester didn’t know what she was doing by confessing to the truth until after she told the police about what she did. Which was the fact that she and her brother had gone on a murder spree that ended with her killing both her brother and her foster mother so Hester was now safely locked away.

Dean Munsch on the other hand, hadn’t gone down for the murder she committed so she had been free to buy a hospital that she claimed was part of her mission for fixing American Healthcare System. That funnily enough was AHS for short. So the Dean had hired the people that she could for such a hospital. She had gotten a doctor that had recently gone through the first hand replacement surgery and another doctor that had surprisingly sought her out. But the Dean wasn’t so great at picking out staff so she eventually found Zayday Williams and convinced Zayday to study at her hospital.

The hospital was a teaching hospital and so Zayday was one of the Dean’s first students. However, Zayday quickly noticed that she was the only woman that was studying there. So she told the Dean to practice what she teaches about the New Feminism and the result from that surprised everyone. The Dean had apparently wanted to make amends to a group of women she knows that she hasn’t always treated fairly so she had sought the Channels. The Channels had been released from prison, but their rich families had disowned them all and people on the street still kind of thought they were murders. And so they needed to change their image as well.

So the Dean told them that they should come work at the hospital where they would be ghosting professionals while they learned. Though the ladies hadn’t known what type of ghosting the Dean mentioned and they had thought that they were automatically going to be doctors at the hospital so the truth had been disheartening. The Channels had wanted paying jobs and instead they found out they were unpaid med students so they had just wanted to quit when they realized that actual hard work wasn’t their forte yet they changed their minds after they met the two doctors they would be following.

Dr. Cassidy Cascade had a certain appeal to him, but the doctor that truly caught Chanel Oberlin had convinced the other Chanels that they should stay on at the hospital after meeting Dr. Brock Holt. Brock was the man that lost his entire hand after an electrical surge had made his friends play with the switches and the garbage disposal came back on while he was digging out his Harvard ring. Emphasis on the being from Harvard. So it was the hand loss that made Brock take a positon as Munsch’s hospital. He said the hospital was his second chance and that he couldn’t ruin it for anything.

Brock therefore, didn’t want to ruin that second chance by having the Chanels as students. The hospital’s first patient was a woman with a unique condition that made people call her werewolf girl and the Chanels had been insensitive to the patient. Yet, Chanel #1 got her act together and figured out how they could help werewolf girl without lobotomizing her like Zayday had suggested. So the method that she had come up with had removed all of the patient’s hair and a quick makeover involving a wig had helped the patient to feel pretty again.

But the Cure Institute had a downside. Like a serial killer being on the loose because the patient had never gotten the chance to leave the hospital before her head was cut off by someone wearing the old Halloween costume of the doctor all those years that purposely killed a patient. So the stress of a new killer and the possible death of one Chanel already was bound to affect the Dean’s new business venture.