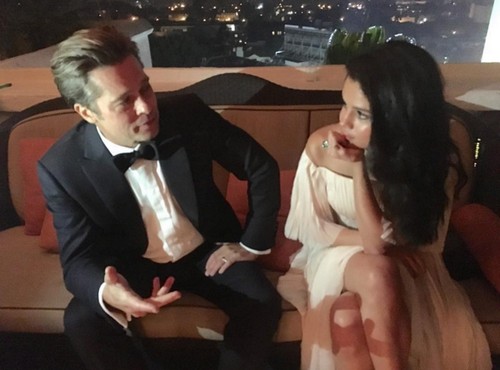 Selena Gomez is ready to set the record straight on Brad Pitt cheating rumors and her rumored role in Angelina Jolie’s divorce. After spending the last several months in hiding, Selena Gomez has finally been spotted in public once again.

Selena Gomez took some time to chat and meet with fans while she was out and about in Tennessee this past weekend, sparking rumors that she’s finally ready to come clean about the Brad Pitt cheating and Angelina Jolie divorce rumors.

During the summer Selena Gomez abruptly canceled the remainder of her Revival Tour, citing depression from her ongoing battle with lupus as the pain reason. Yet, many fans couldn’t help but wonder if Selena was having a meltdown behind the scenes over seeing her on-again, off-again boyfriend Justin Bieber romance several different women in public, including his short-lived relationship with 18-year-old model Sofia Richie.

If that weren’t enough, there’s also been another theory surfacing that Selena might have gone undercover because she secretly new about Angelina Jolie and Brad Pitt’s shocking divorce. Several rumors indicated that Angelina was suspicious over Brad and Selena’s special meeting at the Golden Globes earlier this year and that the actress might have found photos of the former Disney starlet in Brad Pitt’s phone.

To make matters worse, Selena Gomez is also good friends with Brad Pitt’s ex-wife Jennifer Aniston, which only gives Angelina Jolie even more reason to believe that the young singer an untrustworthy celebrity that shouldn’t be hanging out with her husband behind her back.

Of course, no one knows what the real truth is behind Selena Gomez’s disappearance except of course the singer herself. But now that the headlines over Angelina Jolie and Brad Pitt’s divorce seems to have dwindled down, it only makes sense for Selena to be out and about again.

The last thing she wants is to be connected to the most shocking Hollywood divorce this generation has ever seen. And while there’s little doubt that Brangelina are not getting divorced because of Selena Gomez, the singer still doesn’t want to take the chance of being caught in the middle of their vicious divorce.

With everything that she’s gone through with Justin Bieber, her mental health battles and of course her lupus disease, Selena doesn’t one of the most powerful women in Hollywood going after her, especially during her very fragile state right now.

That’s why Selena is slowly coming back into the spotlight, because after all she can’t be in hiding forever. Selena Gomez’s career would suffer incredibly if she took more than a few months off from the limelight. Do you agree, CDL readers? Come back to CDL for all your Selena Gomez news and updates!