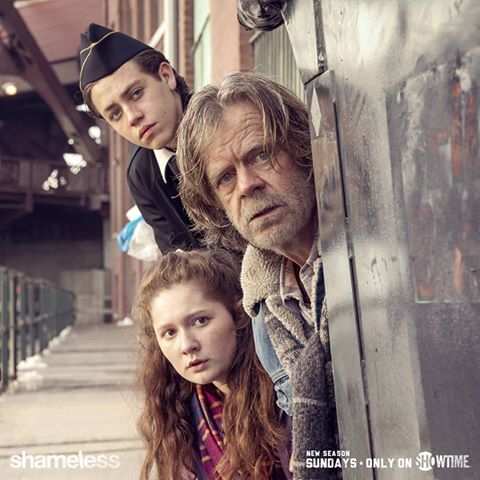 Tonight on Showtime the uniquely twisted and highly entertaining show Shameless returns with an all new Sunday, December 18, season 7 episode 12 Finale called, “Requiem for a Slut” and we have your weekly Shameless recap below. On tonight’s Shameless episode, as per the Showtime synopsis, “The Gallaghers deal with the loss of one of their own and grapple with mixed feelings about their grief. Meanwhile, Frank (William H. Macy) devises a new scheme, and Debbie, Carl and Liam get roped into it. Elsewhere, Lip (Jeremy Allen White) takes steps to improve his future; and Kev and V get their revenge on Svetlana.

Tonight’s Shameless season 7 episode 12 Finale is going to be great, and you won’t want to miss it. So be sure to bookmark this page and tune in for our coverage of Shameless tonight between 9 PM – 10 PM ET! While you wait for our recap, make sure to check out all our Shameless spoilers, recap, news & more, right here!

Tonight’s episode of Shameless kicks off with Ian on his way home after his impromptu trip to the Mexican border with Mickey. He has no idea that Monica was just rushed to the hospital.

Meanwhile, Fiona, Lip, and Debbie are sitting in the waiting room at the hospital. A doctor emerges from Monica’s room and gives them the sad news – their mom is dead.

Fiona heads outside to find Frank, he is sitting on the sidewalk in front of the hospital. Fiona tells Frank that Monica is dead, he doesn’t even react, he just stares off in space. Fiona tries to get Frank to come inside and say goodbye to Monica. He ignores Fiona and wanders off down the street away from the hospital and in to the closest bars. Ian strolls

Ian strolls in to the Gallagher house. He lies and says that he has been at work the last few days. The Gallager’s gather around the kitchen together for some beer and KFC chicken. Fiona and Debbie go through the envelope of Monica’s possessions from the hospital. Fiona finds a key with a strange address on it.

Meanwhile, Frank is still wandering around outside, drunk. He makes it back to the Gallagher house in the middle of the night and falls asleep on the kitchen floor.

Fiona finds Frank lying on the floor passed out with a bloody nose. She has a moment of weakness and feels sorry for him and gives him a pillow.

The next morning, Carl arrives at the Gallagher house, fresh off the bus from military school. He stopped at the grocery store and picked up some food so he could make everyone breakfast. Lip and Fiona smell bacon and rush downstairs. Kevin and V show up with donuts. Everyone catches up over breakfast and then Fiona heads to the diner.

Fiona heads to her office and tries to call Monica’s long lost dad to let him know that she died. She leaves a message with a secretary at his job.

After breakfast Lip heads to a motor cycle job to visit his friend Brad from AA. He explains that he has been craving a drink ever since his mother died. Brad invites Lip to help him work on one of the motorcycles. The guy that is trying to sell Fiona the apartment building shows up at the diner. He gives her copies of all of the inspections that he had done on the place. He reassures her that everything is in working order and they agree to meet up for coffee later to discuss the sale.

The guy that is trying to sell Fiona the apartment building shows up at the diner. He gives her copies of all of the inspections that he had done on the place. He reassures her that everything is in working order and they agree to meet up for coffee later to discuss the sale.

Frank is still sleeping on the kitchen floor – he finally wakes up after everyone has gone and searches the refrigerator for beer. Frank isn’t too thrilled when he sees that the kids went through Monica’s stuff. He finds the key that Monica had and realizes it is to a storage unit.

Frank, Debbie, Carl, and Liam head to the storage units. They break in through the gate and send Liam in first. Frank insists that Monica had something valuable stashed in the storage unit.

Fiona and V head to the mortuary to take care of Monica’s funeral arrangements. While they are waiting, they brainstorm ways to get the Alibi back from Svetlana. Fiona thinks that V should just call immigration and get Svetlana deported.

Frank and the kids get in to Monica’s storage unit. It looks like she was living there, she even has a bed laid out, food, and a pot to go in the bathroom in. They start rummaging through the boxes and clothes and Frank finds a huge trunk of drugs – he tells the kids that it is the inheritance that their mom had stashed away for them.

Ian finally pays Trevor a visit. He admits that he has been dodging his phone calls because he ran off with Mickey. Trevor is pretty calm about the whole thing and says that he will go to his mom’s service.

Fiona heads over to the building that she has been looking at – the owner is pretty pushy about moving the property. Fiona shakes his hand and agrees to buy the place before she heads home.

At the Gallagher house, Frank is holding an emergency family meeting. Fiona is furious when she learns that Frank has brought home $70,000 worth of meth. She orders him to flush it down the toilet, but no one agrees with her. They are going to sell the drugs so they can have their inheritance.

Grandpa Bill arrives at the house, and beats the crap out of Frank. He announces that he will be back in the morning to make proper funeral arrangements for Monica, he’s not thrilled that Fiona planned on getting her cremated.

After Bill leaves, all hell breaks loose. Frank freaks out because Debbie won’t tell him where she hid Monica’s meth. Frank attacks Debbie, and then Fiona steps in, and the kids wind up in an all out brawl with their own father over the drugs. They kick Frank out, and Fiona has some harsh words for him – she tells Frank that she is happy that Monica is dead.

The next day Fiona heads to the funeral home to make sure that everything is set up for the funeral. She stuffs her share of the meth in Monica’s casket and whispers “F—k You Mom,” and punches her dead mom. The rest of the Gallagher kids arrive for the funeral, they all take a turn sharing a memory of Monica – while Grandpa Bill listens in horror. Frank shares a heartfelt speech, which starts off with remembering how Monica introduced him to cocaine.

That night, they throw a good old fashioned party at the Gallgher’s house – full of booze and and dancing. Lip is determined to stay sober, his girlfriend Sierra finds him sitting outside alone and drinking coffee. He opens up and admits that he wants to start over fresh and go back to college. Tonight’s episode ends with Frank convincing Fiona to share a dance with him, the Gallagher Family dances the night away.

Tonight’s episode ends with Frank convincing Fiona to share a dance with him, the Gallagher Family dances the night away.

In the morning, Lip heads to another AA meeting, determined to stay on the right path and not follow in his parents’ footsteps.

Carl spends the morning with Frank, spraypainting a tribute to Monica on the side of a building.