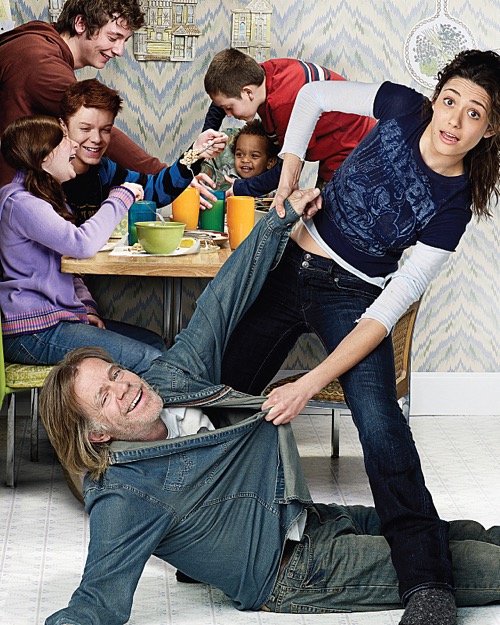 ‘Shameless’ spoilers reveal that Emmy Rossum [Fiona Gallagher] will make her directorial debut with the fourth episode of the Showtime drama’s seventh season. Get ready – the Gallagher family will return on Sunday, October 2, at 9pm ET Showtime has announced.

Emmy shared several behind the scenes photos with ‘Shameless’ fans, including the announcement that she would direct at least one episode. Emmy shared a photo of the script on Instagram. The episode is titled ‘I Am a Storm’ and was written by Shelia Callaghan.

Filming for ‘Shameless’ season 7 has begun and Emmy Rossum has been sharing lots of behind-the-scenes photos via social media. Even though Fiona left Sean [Dermot Mulroney] at the altar after discovering he was still using drugs, will Sean be back? Emmy teased fans with a shot of Patsy’s Pies, the restaurant Sean owns.

Emmy and co-star Shanola Hampton – who portrays Fiona’s best friend V- had their heads together in another pic shared on Instagram. The two ladies appear deep in thought. What do TPTB have planned for V and Kevin [Steve Howey] in the seventh season of ‘Shameless’? V and Kevin ended season 6 in an interesting marital arrangement with Svetlana [Isidora Goreshter].

What’s going on with Lip [Jeremy Allen White] and Ian [Cameron Monaghan]? Emmy Rossum posted a pic on IG of Jeremy with his head on her shoulder looking up at her with puppy dog eyes. Cameron is in the background with his hand pressed up against what looks like a window with a pleading look in his eyes. The ‘Shameless’ spoilers for season 7 will definitely be interesting.

Frank [William H. Macy], Carl [Ethan Cutkosky] and Debbie [Emma Kenney] are all back with Fiona, Lip, Ian V and Kevin for what will be an outrageous seventh season of ‘Shameless.’