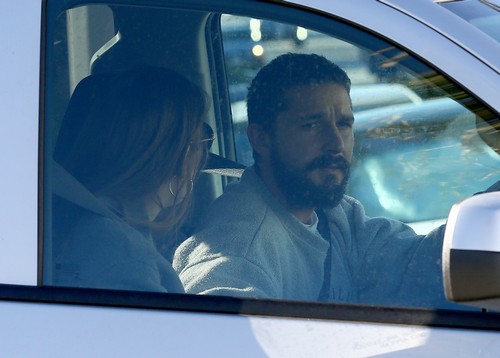 Shia LaBeouf and Mia Goth are engaged. Recent photos of the couple show Mia wearing a large diamond ring on her left hand. But will LaBeouf and Goth actually make it to the altar?

To add to the speculation of an engagement, Shia LaBeouf called Mia Goth his fiancée during his #Elevate live-streamed art performance in February. A source told US Weekly that Shia confided in a cashier at a grocery store that he and Mia were “set to get married.” That’s when the other shopper noticed the big old diamond on Mia’s finger.

This isn’t the first time the couple has the world wondering if they’re planning a walk down the aisle. During a Miu Miu event at Paris Fashion Week in March 2015 the British actress was wearing what looked like an engagement ring on her left hand ring finger.

There was no announcement from either Shia or Mia after that ring wearing incident. Then in July 2015 Shia was taped threatening Goth and everyone figured the relationship had ended forever.

A few weeks later Shia LaBeouf was out and about holding hands with “American Honey” co-star Sasha Lane. If Sasha and Shia were hooking up that must have ended quickly, because in October 2015 Shia and Mia Goth were back together.

That reunion happened sometime after Shia was arrested in Austin, Texas on suspicion of driving while intoxicated.

Shia’s dating history shows he can barely be out of one relationship before jumping into the next. Shia dated actress Carey Mulligan for nearly a year before the” Wall Street: Money Never Sleeps” co-stars ended their relationship in 2010.

After four years of tumultuous dating Shia LaBeouf and Mia Goth, who met in 2012 on the set of “Nymphomaniac: Vol. II,” are allegedly engaged. It will be not only a miracle if they get married, it will be a double miracle if Shia and Mia stay married.