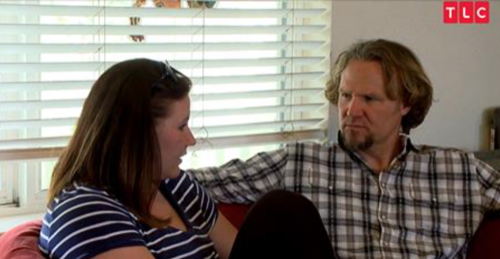 TLC’s reality show about a polygamist family Sister Wives returns tonight with an all-new Sunday, December 4, season 7 episode 2 called “Kody Takes Responsibility” and we have your weekly Sister Wives recap below. On tonight’s Sister Wives season 7 episode 2 as per the TLC synopsis, “Kody preaches forgiveness to Mariah in the aftermath of her mother’s catfishing catastrophe; Madison and Mykelti anticipate their upcoming nuptials; Janelle and Meri’s therapist outlines a bold plan for saving their relationship.”

Janelle apparently didn’t know a single thing about modern bridal showers. She had thought she did however that all changed as she actually began planning a shower for her daughter Maddie. Maddie was getting married and bridal showers were supposed to be an opportunity for friends and family to express how happy they were for her. So Maddie’s best friend as well as Robyn’s sister, had offered to help Janelle with the shower and they had some great ideas. But when they told Janelle that some people were going to bring lingerie for Maddie and that there might even be a few games involved, Janelle had been left completely shock.

Janelle didn’t think a shower with their friends and family there was the sort of place for such things and she had hoped to deter people from bringing those kind of gifts. She had asked the other ladies if it would be ok if they specified “classy” gifts on the invitations. However, the other ladies did think that would work and did their best to find a good compromise between what Janelle wanted and what Maddie’s friends were going to be expecting. So Maddie’s best friend said that maybe they should out two tables for bridal gift. There were would be the chaste table for those types of gifts and the other table for the other types of gifts.

Though Janelle was still pretty uncomfortable with the fact her daughter would be getting lingerie and she said that it hadn’t been like that with either of the sister wives. They all had celebrated their marriage in one or another and the only time someone had ever tried anything funny had been with Christine. Someone had unfortunately given Christine a gift that had embarrassed Christine and so had had quickly returned it not long after she got it. So the whole naughty gift thing was new to everyone and they were sure how they should feel about it.

The sister wives had all taken hands at raising Maddie after and so they weren’t sure how they would feel seeing Maddie opening up gag presents or finding out that she had been gifted underwear, but they did know that they wanted Maddie to enjoy herself and just have fun. Yet, there was difference between overlooking a few gifts that might make them blush and simply saying “that’s” great to the fact that Mykelti wanted to get married. Mykelti was unfortunately, the more impulsive little sister and she had barely dated Tony when they first started to throw around words like marriage. So what the family wanted to know was why the rush?

Kody on the other hand, was thinking that he couldn’t afford another wedding so soon after Maddie’s so he had wanted to get to the heart of why his daughter believed she had to marry her brother right this second. So Kody had invited Tony out to lunch and they eventually became honest with each other though their conversation might have gotten to be too honest because Kody found out that Mykelti and Tony were getting frustrated with their chaste courtship. The Chaste Courtship was when the couple dated and didn’t have sex. But usually people didn’t get married just because they wanted to have so sex and so the young couple got really lucky that Tony talked to Kody.

Kody had found the humor in it all. He hadn’t wanted to tell his daughter that was no reason to get married yet he also didn’t want the couple getting married out of frustration rather than genuine feelings. So all Kody could do was convince Tony to hold off on the actual marriage and he did that. He told Tony that he should have a longer engagement and Tony caved mainly because he had wanted the lunch to be over. However, Mykelti had later been upset about that when she found out and she still didn’t want to put the brakes on getting married only she still needed time to learn a little more about Tony.

Tony was a nice young man and he clearly put some thought into his proposal seeing as he wants to read Mykelti a poem he had written for her. Though there were a few things that Mykelti didn’t know about him. She didn’t for instance that he wants a large wedding one day with all the fanfare while she would much rather prefer something smaller. So whether she admits it or not they clearly needed to have a longer discussion about their future together and they should at least see if they could plan a wedding together in the meantime. And as Mykelti was figuring things out, Kody also had to put another fire with Mariah.

Mariah has been distant for some time now and this problem with her mother wasn’t getting any better. Yet, Kody was trying to do his best and get Mariah to be somewhat understanding of Meri’s catfish situation, but nothing seemed to work with Mariah. She didn’t want to see or even hear that her father also to blame for what Meri did or that Meri had been taken advantage of. So Kody thought about therapy. He wanted Mariah to go to therapy with her mother and he thought with Mariah home for the summer that she wouldn’t be able to refuse. Only she didn’t want to have therapy with her mom. She had wanted to see Nancy on her own and so Kody just had to make due with that for the time being.

Mykelti had done as her father suggested. She and Tony were holding off on getting married right away and they were doing their best on figuring a few things out in the meantime. But neither of them had felt that they should wait on getting engaged and so Tony had gone ahead with his plans. Tony had wanted to take Mykelti on a hiking trip that would end with both a picnic and a proposal however Tony had forgotten a few things. He had forgotten that Mykelti didn’t like hiking and that she would truly hate it that he forgot to bring the food for their picnic. So at last second Tony had been left with nothing.

Most of his plans had fallen through and he had slowly watched as Mykelti grew frustrated with the long hike. However, he had hoped the proposal would be enough to help Mykelti forget about the other things and he wasn’t afraid to throw in the big guns. Tony can apparently be very smooth and even Kody had thought so. Kody had said that Tony had this nerd vibe about him though he was smooth about it that he had ended up liking him more than he had expected. So Tony brought out all of his charm and it didn’t hurt that he was beginning to waver on the whole putting the wedding off until December.

December was the month that Kody had mentioned when he had asked Tony to hold off on the wedding though Tony had only agreed because he wanted to get away from Kody at the time. So technically he hadn’t been sure about postponing the wedding to begin with. Yet, what was really changing Tony on the whole thing was Mykelti. Mykelti believed that weather in August would be perfect for a wedding and that she also didn’t think she would need more than three months what with wanting a small wedding as well. And so Tony was wavering even as he was doing the hike.

Though no one in the family wanted Tony and Mykelti to get married too son. The adults all thought that they should hold off rushing into marriage and, frankly, Janelle’s personal fear had been about Mykelti overshadowing Maddie’s wedding. Maddie had suddenly turned into Kody overnight and she was doing her best to keep everyone tightly to the schedule. So Maddie was drawing itinerates with timing, where they meet, who was allowed to wear what, and so Mykelti throwing a wedding at the same time would be too much of an overload.On the other hand though the adults

On the other hand though the adults were surprise that their Mykelti didn’t just do something as wildly as she normally does. Like wanting to married right after Maddie’s wedding or even before Maddie’s wedding. But luckily they had no cause for concern as Maddie’s wedding was progressing and Maddie’s wedding had also helped things between Janelle and Meri. The two women had had a rough start as sister wives and smoothing that over hadn’t been easy for them. So they were in therapy with Nancy and that commitment to making things work was crossing over into their personal lives.

Janelle for instance, had to be on hand for Maddie on her daughter’s wedding and so Meri had offered to take care of Janelle’s other children. Meri had said she had get them up and ready on time. So Janelle truly appreciated that and that also made her realize that was simply Meri. Meri was the sort of person to always try and help, but she hadn’t seen that before because she hadn’t wanted to. However, things were changing for the better and the two women were finally getting the chance to have that wonderful sister wife relationship that they both always wanted and had been too scared to pursue.

So everything was falling into place and Tony also got lucky later. It turns out that his hiking expedition which had been a little crazy was just the sort of thing that got Mykelti to laugh in the end. Even as they kept getting lost on the trail. Yet, what truly saved Tony’s proposal was the fact he had proposed near a waterfall with a poem he had written for her. It had been sweet, somewhat sappy, and Mykelti did forget that Tony failed to pack a picnic because she had been so excited about getting engaged however Mykelti still wanted an August wedding date and Tony could be talked into it.