So You Think You Can Dance (SYTYCD) LIVE Recap – Who Stood Out? Season 13 “The Next Generation: Top 4 Perform”

BY Rebecca Tarrant on September 5, 2016 | Comments: one comment
Related : Reality TV, Recap, So You Think You Can Dance, Television, TV 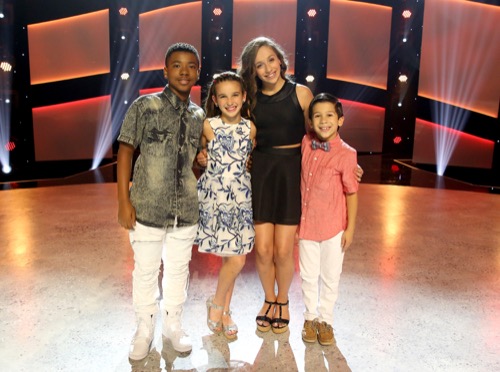 Tonight on FOX their Emmy-Award Winning So You Think You Can Dance returns tonight with an all- new Monday, September 5, 16 episode and we have your SYTYCD recap below!  On tonight’s episode, with only the best dancers remaining the top 4 perform.  There will be no eliminations tonight!

On last week’s episode, the top 5 performed and Tahani Anderson was eliminated from the competition. Emma Hellenkamp, J.T. Church, Tate McRae and Kida Burns moved ahead with a chance to compete in the finals.  Did you watch the episode?  If you missed it we have a full & detailed So You Think You Can Dance recap, right here!

On tonight’s episode, as per the FOX synopsis, “With only the best of the best remaining in the competition, the dancers must give it their all to stay on top. The Final Four continue to stun the judges and the nation with incredible performances in a week without eliminations.”

For the Top 4 group number, the four remaining contestants perform a routine choreographed by Tabitha and Napoleon, where the contestants are crash test dummies.

Kida Burns teamed up with All-Star Sasha for an African Jazz number choreographed by Sean Cheesman. Paula said the dance was executed perfectly, Maddie loved the duo pairing and Kida’s enthusiasm, and Jason and Nigel both complimented Kida’s evolution as a dancer.

Tate McRae is up next, performing a salsa number with All-Star Jonathan that was choreographed by Stephanie Stevenson. Maddie loved the lifts, Jason said it was a winning performance, Nigel said she is one of the most versatile and mature dancers they have ever had on the show and Paula felt it was a wonderful performance.

Emma Hellenkamp performed a contemporary dance with All-Star Jenna next. The piece is about the adoption of a child and choreographed by Jaci Royal. Jason felt that the performance was beautiful, Nigel loved the emotional aspect of the routine, Paula said it was a breath of fresh air and Maddie was impressed by the emotional depth Emma portrayed.

J.T. Church is the next contestant to perform. Along with All-Star Marco, J.T. performed a Bollywood number choreographed by Nakul Dev Mahajan. Nigel thought the aerial jumps were amazing, Paula said J.T. was magnificent, Maddie thought the performance was very strong and Jason said J.T. was limitless.
Kida Burns performed his solo R&B piece next.

Tate McRae and All-Star Kathryn then performed Tate’s favorite dance of the season, “She Used To Be Mine,” choreographed by Travis Wall. Paula said that Tate has grown exponentially as a dancer, Maddie felt that the piece and Tate’s performance was beautiful, Jason said it was spectacular, and Nigel said that she could not have done any better.

Kida Burns and All-Star Fik-Shun performed Kida’s favorite dance of the season, “Winning,” choreographed by Christopher Scott. Maddie said that Kida was the most impressive of all the contestants because of the growth he has shown this season, Jason loved the performance, Nigel said Kida was sprinting for the finish line, and Paula was impressed with the way he is able to let his personality shine through in his dancing.

J.T. Church and All-Star Robert performed J.T.’s favorite dance of the season, “The Mirror Piece,” choreographed by Travis Wall. Jason felt that the performance was extremely special, Nigel and Paula said it was a magical performance, and Maddie said he was a phenomenal dancer.

Emma Hellenkamp and All-Star Gabby performed Emma’s favorite dance of the season, “Walk Like An Egyptian.” Nigel loved the piece, Paula said it was even better than the first time, Maddie thought Emma was an exceptional tapper, and Jason thought Emma was the most improved dancer of the season.

Tonight’s votes will be combined with last week’s votes to determine who the winner will be in next week’s finale. The four remaining contestants are Emma Hellenkamp, Tate McRae, J.T. Church and Kida Burns.