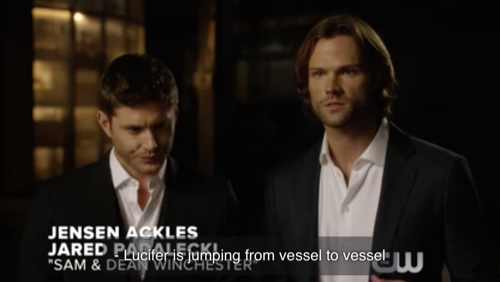 Supernatural airs tonight on the CW with an all new Thursday, October 20, season 12 episode 2 called “Mamma Mia,” and we have your Supernatural recap below. On tonight’s Supernatural episode, Dean (Jensen Ackles) is uncomfortable with putting Mary (Samantha Smith) in danger.

Did you watch the Supernatural season 13 premiere where Dean (Jensen Ackles) was overwhelmed as he came face to face with his mom, Mary Winchester (guest star Samantha Smith). If you missed the episode we have a full and detailed Supernatural recap, right here for you!

On tonight’s Supernatural episode as per the CW synopsis, “Dean (Jensen Ackles), Castiel (Misha Collins) and Mary (guest star Samantha Smith) have a lead on Sam (Jared Padalecki) and set out to rescue him. Dean is uncomfortable with putting Mary in danger but she insists on going along. Meanwhile, Crowley (Mark A. Sheppard) is tipped off that Lucifer has taken over the body of rock star Vince Vicente (guest star Rick Springfield).”

Tonight’s season 11 finale looks like it is going to be great and you won’t want to miss it, so be sure to tune in for our live coverage of CW’s Supernatural at 9:00 PM EST!

#Supernatural starts with Sam in bed with Lady Antonia fooling around. She tells him the London Men of Letters use hunters only as tools. She asks him questions about whom he and Dean report to and then he distracts her by rolling on top of her.

Cass is out looking for Sam and calls to check in with Dean who says it’s weird to have his mom back from the dead. Cass tells him he’s overcomplicating things and ends the call. Mary comes in and asks if there is news on Sam. Dean says he’s in Missouri somewhere.

Mary overheard some of his conversation with Cass and asks about it. Dean says he’s happy she’s back and Mary says she can catch up to the times. Mary asks how she’ll face Sam and says the yellow-eyed thing came from him because of her.

Antonia strokes Sam’s back and comments on the ongoing supernatural attacks in America. Antonia asks if some of their soldiers might be compromised. Sam recalls the torture and cold water. The bed and sex is a hallucination of sorts. He snaps out of it.

Antonia sits in front of him and says it was fun while it lasted. She says it was a powerful spell. She asks if it was good for him. Sam scoffs. Antonia says she can’t do the spell again or his brain will go mushy. She says she has to use something harsher and pulls out some scary tools.

She calls it enhanced interrogation and comes at him with a blade. She lunges at him. Mary wakes and finds Dean at the computer. She says she was dreaming about John and says he was a great dad. Cass calls and says he thinks he found Sam at a farm.

Cass says the place is powerfully warded and rented just two weeks ago. Cass sends him the address. Mary wants to go and Dean asks her to stay behind. Dean says he can’t do his job if he’s worried about her. Mary says don’t be and says she’s going.

Antonia continues to torment Sam. She asks for names of all the hunters, database info from the bunker, and info on Ruby, the demon. Mick calls Antonia and tells her that her sidekick is dead and she’s been naughty. He’s with the body of her torturer.

Rowena is out with a man on a date. She lies and says she’s with the Royal Ballet. Crowley pulls her away from her date and they bicker. Rowena tells him not to muck up her chance with the guy. Crowley says he’ll keep quiet if she helps with Lucifer.

Rick Springfield is Vince Vincente, a rock musician who has just ended a show. He goes to his dressing room and pours a stiff drink. He turns down the invitation to go party and one of his bandmates comments that he needs to live a little.

He mentions Jenn, Vince’s dead wife, and he tells the guy to get out of there. The guy goes and then things go wonky in the dressing room. The picture of his wife falls over and he gasps in fear. Mary tells Dean that all hunters end up the same way no matter how good they are.

Dean says her death changed John and hunting took over his life and he was the same. Dean says Sam was different and wanted out. He tells her Sam went to Stanford but he went to Sam after John disappeared. Dean says Sam is all he had and vice versa.

Vince goes to his hotel and sees more framed photos of his wife to taunt him. He goes into the bathroom where the tap water turns to blood. He’s horrified to see blood all over his face when he splashes it. He flips out and then the water is clear again.

His lights flicker and lightning seems to be in his home. His TV comes on and goes to snow. He tries to call the front desk of the hotel. Things fly around the room. He locks himself into another room. His dead wife Jenn is suddenly there. He asks how?

Jenn says sorry for swallowing those pills and says it was selfish. Jenn says he left her so many times. He starts crying and says she’s all he wants. Jenn says it can happen and says she’s an angel. She says she can take away his pain and bring him peace.

Lucifer gets a new body

She says he has to do one easy thing. She tells him to invite her in. He does and her eyes glow red. She kisses him. Rowena chants and Crowley asks why it’s taking so long to find Satan. She says it’s not Google Maps. Rowena says this stress is why she retired to Boca Raton.

Crowley mocks her average life with Ben, the guy she was with. Rowena’s spell works and Crowley says they have to put Lucifer back in the cage. She refuses. Crowley threatens to kill Ben. She calls him a hateful snake. Rowena says he can’t be caged while in a vessel.

Cass waits as Dean and Mary pull up to meet him near the farm. Dean asks about the wards and Cass says it’s cloaked then remarks on him bringing his mother along. Dean walks closer and tells his Mom to stay back. She won’t so Cass intervenes. Dean goes to check it out alone.

Vince’s bandmate goes to check on him and finds him looking awake and spry. Vince pours a drink and says he’s not coming to rehearsal. The guy isn’t happy but when Vince’s eyes glow red, he’s scared. Vince throws him through the door of the hotel room.

Vince says – I told you I had plans. Dean creeps around the farm and sees some damaged walls and then finds the storm cellar and sees it’s locked from the inside. Then he realizes he’s trapped in a ward. Antonia comes back to Sam who still curses her.

She drags Dean into the room. Antonia says she can torture Dean to make Sam tell her what she wants to know. Lucifer goes to hell in his new body and finds Crowley on the throne. He tells him to get off his throne and calls him a squatter.

Crowley mocks him. Lucifer is annoyed. Crowley says why do you want to deal with these demons when you can reclaim heaven. He says that’s real estate worth ruining. Lucifer says he can just smite him. Rowena comes out chanting. Lucifer’s hands twitch.

He’s paralyzed. Lucifer says it won’t work for long. Crowley has a vial and Lucifer laughs thinking it’s holy water. Crowley says it’s sulfuric acid and won’t do his vessel any favors. He throws it on him and Lucifer screams as Vince’s body is attacked.

Antonia hits Dean with her brass knuckles. Dean spits out blood. Dean jokes he came by for tea and a beating. Antonia asks him about Benny the vampire that he let out of purgatory and befriended. She says the English are patient and picks up her brass knuckles again.

Lucifer’s face is hideously scarred. Rowena does a spell to send Lucifer’s essence back to the cage. The spell fails. She tries again and again. Lucifer stands and mocks them. His red eyes glow and the shadow of his wings pop out.

Lucifer calls him bad. Crowley disappears and leaves Rowena there. Lucifer chokes her. While Antonia is gone, Dean and Sam talk about who she is. Antonia comes back and starts to torment him but then Mary is there and tells her to get away from her boys.

Mary deals with Antonia but then she makes to choke Mary with a spell. Dean threatens to shoot her. She tells Dean to throw down the gun and he does but then punches her in the head. He knocks her out and the spell is done and Mary is safe.

Mick is there with Cass and says good job. Antonia gets up slowly and Mick says she went too far and she’ll be punished for it. Dean asks to punish her and Mick says no, it’s their problem. Mick says they want to work with Sam and Dean.

Sam doesn’t believe him. Mick says he came unarmed and powered down the wards so Cass could come in too. Dean, Sam and Mary talk later about Mick and the Brit. Mary remarks on Dean shoveling in his food and he’s embarrassed.

Mary says they should call the internet and find out about the other Men of Letters. They laugh. Rowena promises to stay away from Lucifer if she’ll let him go. Lucifer says he’s going to keep her prisoner. Rowena screams as he clutches at her skull.

Sam brings his mom some hot tea. Sam says he knows what it’s like to come back. Sam hands her John’s journal and says it helped him fill in some blanks. Mary hugs Sam who hugs her back gratefully. Dean sits drinking and looking at family photos sadly.

Mary flips through the journals. Antonia tells Mick that the US hunters are worse than the monsters and need to be put down. He says he’s prepared for it if it goes that way. He is sending her back to England and she’s not happy.

He says he’ll bring in Mr Ketch if he has to and he says he already sent for “him.” We see man with a cross tattoo on his hand packing bags and leaving a hotel in Europe.