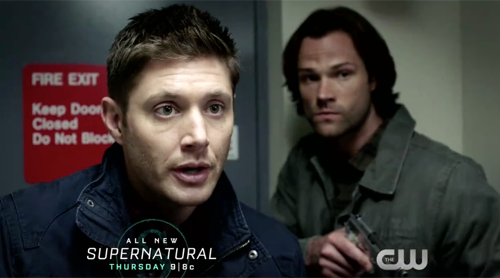 Supernatural airs tonight on the CW with an all new Thursday, November 11, season 12 episode 5 called “The One You’ve Been Waiting For,” and we have your Supernatural recap below. On tonight’s Supernatural episode, Sam (Jared Padelicki) and Dean (Jensen Ackles) must act quickly to prevent a group of Nazi necromancers from resurrecting the führer.

Did you watch the Supernatural season 12 episode 3 where Sam (Jared Padalecki) and Dean (Jensen Ackles) investigated a case that led them to a devout religious family that lived off the grid? If you missed the episode we have a full and detailed Supernatural recap, right here for you!

On tonight’s Supernatural episode as per the CW synopsis, “After learning that the soul of Adolf Hitler has been trapped in a 1930’s gold pocket watch, Sam (Jared Padalecki) and Dean (Jensen Ackles) must act quickly to prevent a group of Nazi necromancers from resurrecting the Furor.”

An antique shop owner as well as one of his best clients, exploded in flames on tonight’s episode of “Supernatural” after they had gotten their hands on a cursed artifact. The artifact however, had been in tact watch that had once been owned by a Nazi member and that had even had swastika symbol on it. So when Sam and Dean had found out about the watch, they were eerily reminded about another case and how the Thule Society were still around just waiting to regain strength. But the guys had needed to make sure they were right about Thules showing up again.

So Sam and Dean had called their friend Aaron. Aaron was over in Berlin carrying out his grandfather’s work and he was their best reliable source. However, Aaron didn’t have a lot to tell them. He said that the Thules were tightening their ranks and that he believed that they were planning something though he didn’t know what and he couldn’t get close enough to find out. So the guys were wondering about what to do next when they got an alert on their APB. Someone else had been burned to a crisp and that case at least had a survivor.

The young man that had been burned to death had been on a date and the date had survived by escaping through the window. Though Sam and Dean had barely found out about the survivor when all of a sudden they saw her being kidnapped in a police car. So the guys followed the car and they eventually found it as a warehouse. The kidnapper had apparently wanted to transfer Ellie and not kill her although she didn’t know why. Ellie hadn’t known anything about the Thules or how her date was killed.

Yet, Christoph ended up revealing why she was so special under interrogation. Christoph had admitted that he and his were part of the Thule Society and then he had said that the watch wouldn’t work without Ellie. The watch carried Hitler’s soul and he needed to inhabit someone of his blood in order to be fully resurrected. So that’s where Ellie came in. Ellie was a descendant of Hitler’s and the Thules wanted to essentially sacrifice as a way to get back her homicidal leader. And, well, Ellie didn’t take the news so well.

Ellie had said that her mother had traced back their lineage to the Mayflower and that never once had Hitler entered the picture. So Christoph decided to tell her the truth. Christoph told her that she was adopted and that the society had been keeping tabs on her for all of her life. But Ellie didn’t want to believe that so she called her mother. She had wanted to find out if she was adopted so she asked and her mother texted her that they needed to talk. And that was more or less an admission that she was adopted.

Ellie though had been heartbroken. She had later told Sam that it was one thing to find out that she adopted and another to find out that she was related to Hitler. So Sam was doing his best to talk her down, but he kind of lost her after he said that Lucifer had almost taken over his body and then he physically lost her when the Thules found them. The Thules had tracked Christoph and they rescued him and would have liked to have kidnapped Ellie if she hadn’t run first. Though sadly Ellie hadn’t run that far.

The Thules had caught up with her and they had kidnapped her again. However, Christoph’s father ended up losing his son. He began telling Christoph that he was a disappointing heir in the car because Christoph hadn’t done for their secrets and had told Sam and Dean about Hitler’s soul. So that had caused Christoph to lash out. Christoph had said that his father used to be a man he could look up to and now he was nothing. Just a man desperate to regain his glory days that he was willing to break back a dead man.

Yet, that had been finally step for his father who felt that millennials simply couldn’t be reasoned with. So his father tried to kill him after they got out of the car with Ellie and it was only by sheer luck that Christoph managed to fight off his would be murder, but the experience had changed him for the better. Christoph had escaped the compound to go find Sam and Dean and he had told them that he could them find Ellie if they could help. And so the guys entered an agreement that weren’t exactly sure of.

They just agreed to partner up with Christoph because he had told them that there was no going back to his own way of life and that he didn’t really love it to begin with. Christoph had said that Christmas was a joke and that Career Day at School was even worse. So Christoph had no love for his father and more importantly he was the only one that could lead them to Ellie. But the guys had been too late for the resurrection. Christoph’s father had put Ellie’s body into his own body and had resurrected Hitler.

So the guys had thought they were too late to save the world however they hadn’t need to worry about Ellie because she could take care of herself. Ellie had gotten her hands on a gun and she had started shooting at Hitler’s guard and the guys mostly finished what she started. Though there had been one difference. They had taken out the guys and then Dean had had Hitler to himself so he did what no one else could. Dean killed Hitler once and for all. And afterward he got to celebrate that with his brother.

And while no one was willing to give Christoph a ride to anywhere, they did bring Ellie back to her apartment and she had said that she was going to call her mom.