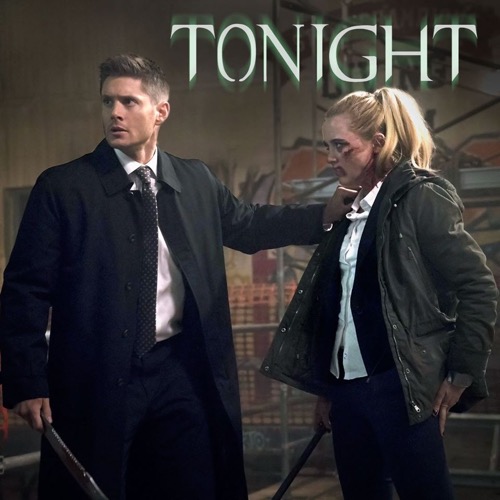 Supernatural continues tonight on the CW with an all new Wednesday February 17, season 11 episode 14 called “The Vessel,” and we have your weekly recap below. On tonight’s episode, Dean, (Jensen Ackles) who hopes to find a weapon powerful enough to defeat Amara, (Emily Swallow) convinces Lucifer to send him back in time to 1944 to the ill-fated submarine mission that sunk the Hand of God. Meanwhile, Lucifer continues his charade with Sam as they wait for Dean’s return.

On the last episode, Sam (Jared Padalecki) and Dean (Jensen Ackles) investigated a set of murders on Valentine’s Day and discovered they are dealing with an ancient curse. Once kissed by the curse, the person was marked to die. Phil Sgriccia directed the episode written by Eric Charmelo & Nicole Snyder. Did you watch the last episode? If you missed it, we have a full and detailed recap right here for you.

On tonight’s episode as per the CW synopsis, “Hoping to find a weapon powerful enough to defeat Amara (guest star Emily Swallow), Dean (Jensen Ackles) convinces “Castiel,” (Misha Collins) who is still Lucifer, to send him back in time to the last reported sighting of the Hand of God.

Lucifer sees the potential in getting his hands on this weapon so goes along as Castiel and sends Dean to 1944 to the fated submarine mission that sunk the Hand of God. Meanwhile, continuing his charade with Sam (Jared Padalecki) while they wait for Dean’s return, Lucifer plans his next move.”

Tonight’s season 11 episode 14 looks like it is going to be great and you won’t want to miss it, so be sure to tune in for our live coverage of CW’s Supernatural at 9:00 PM EST! In the meantime, enjoy a sneak peek of tonight’s episode below for your enjoyment!

Sam had been tirelessly looking for a weapon that could potentially be powerful enough to destroy Amara and on tonight’s episode of “Supernatural” he thinks he found it.

Back during WWII, the Nazis had sent up archaeological digs all across the world and one report listed that they had found a weapon so powerful that it could actually win the war. And they called this weapon “The Hand of God”. Yet this weapon of theirs had gotten stolen by a woman before it could be put to use.

The Nazis had at first believed that Delphine Seydoux had been allied spy, but later on they came to call a Women of Letters. So Sam began looking through the Men of Letters’s account from that time and he eventually came across a journal entry that revealed “The Hand of God” had been on a sub called the “Bluefin”. And unfortunately that sub had disappeared back in 1943 which is when it was suspected to have drowned.

So Sam had lost hope after he read that. He told his brother that there was no way they could recover the weapon if James and his Avatar billions couldn’t. However, Dean had an idea. He said that “Castiel” could help them find the weapon and so he had called his friend asking for that help.

Yet, Lucifer who was impersonating Castiel hadn’t wanted to help the guys. He simply wanted to find “The Hand of God” for himself and use it for himself. And therefore, he had offered his services believing he could get the weapon before Dean ever could but somehow Lucifer had lost both Dean and his chance at boarding the sub.

Sam liked the idea of Dean and “Castiel” time-traveling. But it hated even more when “Castiel” came back without Dean. Apparently the sub had been protected and so “Castiel” had never even got the chance to board.

He got Dean on the sub, but was casted out before his feet could touch the ground. So Sam asked “Castiel” if he could go back in time to send Dean a message or possibly Sam on the sub as well. Though “Castiel” didn’t much feel like getting dunk into the ocean again and he shot down Sam’s first idea by saying Dean may never find the message in time.

Thus, Dean was more or less on his own and he did the one thing that he promised his brother wouldn’t happen – he changed the past. Dean had found Delphine and he had told her that he too was from “The Men of Letters”. Yet what he told the captain of the submarine was that he was a man from the future and that their sub was going to be hit by the Germans.

A fact they hadn’t believed until the Germans suddenly showed up on their radar. So the captain had gone to see what he could do, yet he had left a guard to watch Dean and his interactions with Delphine. And thus Dean had plenty of opportunity to convince Delphine that he was who he said he was.

So she had given Dean the weapon he needed and she had left them together while she went to remove all the wards that she had earlier put in place. Apparently Dean had also convinced her of angels as well and therefore she knew the wards was what was stopping Dean from returning to his own time. And own war.

However, there was one final ward that had been etched into Delphine’s skin and there had been a spell involved that connected the ward to Delphine’s heartbeat. Which meant the ward wouldn’t lose power if it was cut. And it would only stop working if Delphine was dead.

Hence, Delphine had given Dean a dagger to kill her with but his procrastination over the matter had left things too little too late. The Germans had attacked while he had been too afraid to take action and the sub was taking massive hits that were doing damage to the ship. And so it had looked as if they were all going to die.

But, the Nazis had a different idea. They had sent a message to the sub in which they asked that Delphine and her cargo be delivered to them or they were going to sink the sub though, frankly, there was no way the captain was going to comply.

The captain’s mission had been to get Delphine and her cargo to the states. So he was going to accept death, however Delphine came up with a third option. She said she could use “The Hand of God” to protect the captain and his men. And because the weapon was going to kill Delphine in the process, it was going to remove the ward in her skin which would allow for Dean to leave the ship safe as well.

So Dean had made it off the ship with “Castiel’s” help, but Sam had important news for him upon his return.

Lucifer it seems had finally revealed himself to Sam and had also gotten close to killing him. Though Castiel, as in the real one, had resurfaced for a short time in order to stop him. So later Sam had told his brother about what he missed.

And the two were going to face Lucifer now with “The Hand of God” on his, but it was revealed that the weapon only had one use in it. Apparently Delphine had blown a hole through the ship to try and save it though what ended up happening was that the water had filled the entire compartment. And it still sunk to the bottom of the ocean.

Therefore, no one got to use the weapon to save anyone and Lucifer can now count on being warded out of the guys’ place.