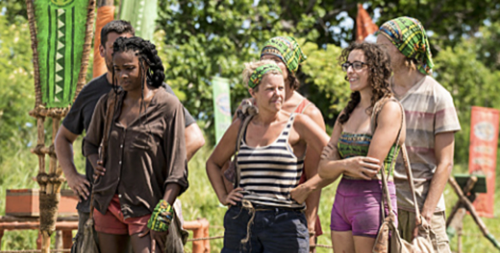 On tonight’s Survivor season 33 episode 6 episode as per the CBS synopsis, “Figgy and Taylor may regret an earlier decision to reveal their budding “showmance” to their tribemates, and some castaways worry there may be a snitch at camp after a hidden immunity idol is found.”

#Survivor starts with the Vanua tribe heading back to camp after Tribal Council after sending CeCe home. Zeke thinks that the Gen Xers are idiots for messing up their numbers and he’s pleased to be in a power seat.

Over at Ikabula, hunger prevails. Jay goes to look for coconuts. He has a diary session talking about how he takes care of his sister and mom and that’s why he’s there. He also looks for an immunity idol with Will along with him. Jay stumbles on a tree limb with the marking on it.

Jay says this means his mom is on step closer to getting a house. Michaela walks up on Jay holding it and Will there with him. She says she won’t tell anyone but later says if she suspects anything, she might rat him out but Jay doesn’t know. Jay and Will worry about her seeing it.

Jeff greets the three tribes at the site of the #RewardChallenge. They see CeCe was sent home. Figgy is happy and says she was worried about Michelle going home. Michelle says the truth works well when Jeff comments on them talking cross tribe like that.

They will do the blindfold challenge with one caller for each tribe. They have to get the pieces and assemble a puzzle all while blindfolded. The reward is pie, cookies, brownies, milk and iced tea. Jessica, Hannah and Bret all sit out.

The callers are Jay, Figgy, and Michelle calling for the teams. The good news is there’s only one guy calling which helps that tribe. Sunday falls and Adam is the first get puzzle pieces followed by Zeke. Each tribe has recover four sets of pieces.

Jay has Sunday and Michaele with puzzle pieces in his hand. Chris struggles to get back for his tribe. Takali has one set of puzzle pieces left. Ikabula gets their third. Ken and Taylor are on the fourth set. David cannot seem to understand what right means. Ken takes a big fall.

Takali is on their puzzle already. David finally gets to a puzzle piece. Michaela nabs the last set of pieces for her tribe. Ikabula gets started and Vanua starts last. Zeke is on the puzzle for Vanua. Ken is for Takali. Hannah gets dizzy from the heat and Jeff points her towards medical.

Michelle is working for Ikabula. Figgy and Ken have a big lead. Vanua is catching up. Figgy struggles with the puzzle. Bret is with Hannah at medical and she says her face is tingling. Vanua wins it from behind thanks to Michelle. Now it’s on for second place.

A race for second and a crisis

Ikabula wins the smaller reward and that leaves Takali with nothing even though they had a massive lead. Hannah is doing poorly and Jeff calls Dr Joe over to check her out. Her arms are cramping and she can’t breathe. She tells Dr Joe not to let her die.

Dr Joe tells her she’s fine and Jeff asks what happened. Dr Joe thinks she hyperventilated and her blood went a bit acidic. Hannah says she’s prone to panic attacks and Jeff says Survivor brings out your vulnerabilities. She thanks them and says she’s good.

The two winning tribes collect their treats. Vanua gets a big pile of sweets and Ikabula gets one basket of cookies. Figgy is upset and crying because she didn’t win it for Takali. They head back to camp with nothing but tears to show for their effort.

Vanua is so happy about their win and Michelle talks about Figgy slipping up and talking about how much she loves her. Zeke can’t believe she did that in front of everyone and left him out of her greeting. Zeke now thinks Michelle needs to go.

Taylor decides there’s no reason to hide that they’re a power couple since they have the numbers on their side. Figgy goes and tells Jessica about their showmance and Jess is not surprised at all. Ken says duh also. Ken says it’s obvious and is surprised she thinks they didn’t know.

It’s now time for the #ImmunityChallenge on Day 19. They have to do balance beams on the water to get bags of coconuts them open them, find balls mixed in, and then move the balls through a table maze. They must get three balls to the end of the tilting table.

Takali sits out Adam. Ikabula sits out Sunday and Will. Ken, David and Jay are head to head and David is actually doing okay. Jay is ahead of him. Ken fell and had to catch up. Jay makes fast work of the bags. Jay gets three then falls.

David is ahead and Ken is struggling. David can only bring up one bag at a time while Jay muscles three at once. Ken made up time with three bags at once. David drags two and Jeff says those bags weigh more than him. Chris, Taylor and Bret are on the second leg.

Taylor makes quick work and Bret is close to him. Takali has a huge lead. Chris grabs the last bag and scrambles to catch up. Figgy and Jessica empty the coconuts and search for the balls. Michaela and Hannah then Zeke and Michelle are searching the coconuts.

Jessica and Figgy start on the maze. They have to balance on a small wood block and operate the tilting table together. It looks like a hassle. Michaela and Hannah are on their table and Zeke and Michelle on theirs. Michaela bullies and bosses Hannah.

Michaela lands one ball and take the lead. Michaela’s bossy ways work as they land a second one. They win it. Ikabula is safe from Tribal Council and it’s a race for second. Michaela gives Zeke some hints to help them. She’s openly bossing them now too.

Figgy and Jessica get a second ball on their own and have one left. Michelle and Zeke get their second. It’s down to one last ball and Vanua is safe as well. Takali is going to Tribal tonight and will have to send someone home tonight.

Jeff asks Michaela about her coaching Vanua. She says they want Millennials to stay and that Tribe is split 2-2. Takali says they have Millennials too and Michaela says it’s 3-2 and if they can’t figure out how to save themselves, it’s their problem.

Figgy talks to Adam about taking out Ken. Taylor comes over and says let’s go for Ken. Taylor wonders if Adam is planning to double cross them. Later, Figgy and Taylor wonder if they can trust him. Jessica tells Adam they can work together with Ken and break up the showmance.

Ken scrambles to save himself

Jessica needs Ken there with her and tells Ken to talk to Adam and convince him he can trust him or he’s going home. Ken says he won’t go down without a fight. Ken goes and tells Adam that they can’t trust the showmance and says he and Jess are voting Figgy.

Ken tells Adam he’s at the bottom of the three. Adam says it’s hard to trust people he doesn’t know. Ken says he has his back and will fight for him. Rain starts as they head to Tribal. Adam says Ken is a good argument and he has to think about what’s best for his long-term game.

Jeff asks Ken about the vote. Ken says it’s obvious there are two Gen X. Taylor says the Millennials are sticking together and says so much is possible when you have a bond. Figgy says Adam voted for her at the first Tribal but she has no animosity.

Adam says she doesn’t look at him like she looks at Taylor. He says there is some kind of “mance” going on and Jeff asks if Taylor is in love. Taylor says it’s like. Ken says Figgy seemed surprised when she broke the news about their romance.

Figgy says they’re just two people voting together like Ken and Jessica will vote together. Ken says numbers can change at any time and it may not be so black and white as Gen X vs Millennial. Jeff points out that Adam is in the middle.

Taylor says Adam could flip and the Millennials might call him on it at the merge and boot his ass out. Adam says tonight is about the whole game not just tonight and whatever four comes out of it can be a four. Jessica says she’s surprised and the merge will still bring contention.

They go vote. Jeff goes to tally the votes and then calls for any hidden immunity idols. None are played. The votes are: Ken, Figgy, Ken, Figgy, Figgy. Adam did it! Figgy is stunned and Jessica and Ken are thrilled. Adam whispers to Taylor that he will explain this later if he can.

Figgy wishes Taylor luck and leaves crying. Jeff says he was right that someone was going back to camp unhappy and it happened. Figgy says she came in guns blazing and sees it as a compliment that they took her out. She says she’s just bummed she doesn’t get to be around Taylor anymore.