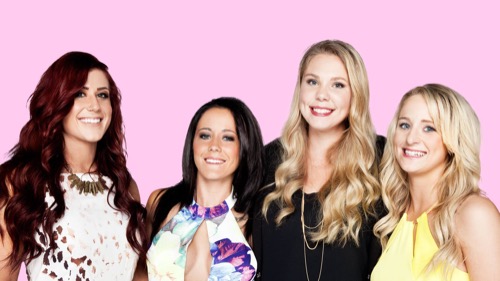 Tonight on MTV their series Teen Mom 2 premieres with an all new Monday March 21, season 7 premiere episode called “Here We Go Again” and we have your recap and review below. On tonight’s episode, in the season 7 premiere, Nathan threatens Jenelle with felony charges; Leah receives sad news about Ali.

On the last episode, we were given a recap of everything that had occurred during Teen Mom 2 to catch us up with the upcoming seventh season of Teen Mom 2. Did you watch the last episode? If you missed it, we have a full and detailed recap right here for you.

On tonight’s episode as per the MTV synopsis, “in the Season 7 premiere, Nathan threatens Jenelle with felony charges; Leah receives sad news about Ali while waiting on the decision in her custody case; and Kailyn attempts to rebuild her relationship with Jo, but hurts things with Javi.”

It sounds like Teen Mom 2 is going to have another amazing season and will be an awesome show. What kind of crazy drama are you expecting to see in this current season? What has been most exciting so far in Teen Mom 2 for you? Can’t wait for tonight’s episode that we will recap right here for you? Sound off in the comments down below and let us know! Don’t forget to check CDL for our live recap of Teen Mom at 10PM ET!

This week on the season premiere of Teen Mom 2 Jenelle has graduated from school and she is seeing Jace more. She meets up with her friend to talk to her about the incident with Nathan and his new girlfriend. Her friend tells her that moving away from Nathan was the best thing for her. While they are having lunch Nathan calls and asks when he can see his son. Janelle tells him “You can’t see your son while you are in school.” She then asks him why Kaiser should go to daycare when he can be at home with me?” Nathan gets angry and starts calling Janelle names. Janelle hangs up the phone on him.

Chelsea is getting Aubree prepared to go to Kindergarten. Cole says that he wishes that he could be there but he has to work. Aubree is still seeing her dad every other weekend and she is excited to start school.

Leah is struggling to deal with the girls and Corey has enrolled them in a school closer to them and forty five minutes from her house meaning that the girls and Leah have to get up extra early and struggle to make sure that they get there on time. One morning the twins were whining about how they want food for their lunch boxes. One of the girls tells Leah that she wants her to cook them breakfast. Leah tells her daughter “You can eat breakfast at school because I don’t have time to cook you breakfast.”

The girls then tell her that they want her to “Take us back home because we don’t trust you and you lie about everything.” Grace then asks her about stopping at the gas station to pick up stuff for their lunch boxes since she didn’t make their lunches. Leah tells her to “Eat the hot lunch at school.” Grace starts to whine that she doesn’t like the hot lunches and she tells Leah “Daddy and Miranda make us stuff.” Leah explodes and tells them “I’m not Daddy and Miranda and the girls start to cry.”

Kailyn and Javi have moved into a new house and despite Jo admitting that he isn’t doing enough to take care of his son, Kailyn decides not to take him back to court. This does not make Javi happy and he tells Kailyn that she needs to take him back to court. Kailyn says that “We all need to get along and show Isaac that he has parents who love him.” Javi says “I do get along with him, but I will never be overly friendly and ask him if he watched the ballgame on TV.”

On Aubree’s first day of school Chelsea is both excited and sad. She tells her friend, who goes with her to drop Aubree off, “I can’t believe she is six already.” Aubree has a bit of trouble waking up, but once she is up she quickly gets ready and they head off to school.

After lunch with her friend and the threatening phone call from Nathan Janelle calls her lawyer to tell her what happened. The lawyer assures Janelle that in order to be charged with a felony “Serious bodily harm would have to be done such as organ damage.” Janelle laughs feeling a bit reassured. The lawyer then tells her that she is facing up to thirty days in jail. Janelle worries because of her wanting to work in the medical field.

Jo and Vee are outside with Isaac and when he goes inside Jo thanks Vee for being there to help with the situation with Kailyn. He tells her that they “have made great progress.”

Leah is having lunch with her friend and telling her that she is worried about the custody hearing. she tells her she worries that “If the girls are taken away from me they will be devastated. Her friend asks “Why are the girls in school so far away from your house?” Leah tells her that “Corey put them there and it is easier to leave them than pull them out right now.”

Chelsea is with her friend Chelsey and tells her about Aubree’s first day of school. She mentions that Adam was there and wanted to talk about visitation. She says “I wonder what it’s going to take for me to trust him?” Her friend tells her “I will never trust him.”

Nathan is with his girlfriend and they are talking about the incident with Janelle. Nathan says that “She is withholding my son from me.” The girl tells him “The violence has to stop and I think Kaiser would have a better life with you so I will help you build your case.” Nathan agrees with her.

Corey is talking to Miranda and he tells her about Ali’s upcoming appointment and asks Miranda to go with him. She tells him “Of course i’ll go with you.” Meanwhile Leah drops her kids off so that she can leave with Ali for her appointment. She tells her friends that she is “Worried about dealing with Corey.” Her friend asks if Miranda is worried and Leah says she doesn’t know. Her friends tell her that she is being too nice and that she needs to stand up for herself.

Then he tells Kailyn that he “Just wants to be at home.” and that he wants her to bring Lincoln home. He tells her that he wants to spend time with one of his kids and that there is “No reason for Lincoln to be with them. Kailyn gets angry and tells Javi “You just don’t want to be with us.” She then tells him that she is not driving all the way home and then going back out just to bring Lincoln home and despite Javi’s protests not to hang up the phone she hangs up the phone.

At Adam’s parents house he is talking to his dad and telling him about how he is working more. His dad asks him how it feels knowing that Aubree is in Kindergarten now. Adam tells him about getting pictures of her in various places in the classroom. He also tells his dad that Chelsea is willing to sit down and talk to him about letting him have Aubree at his house.

When Chelsea picks Aubree up she imeadiately asks where Cole is. Chelsea tells her he is still at work, but he is “super proud of her.”

Janelle is dealing with Kaiser who is sick and so she doesn’t get to spend as much time with Jace as she would like. Janelle starts to freak out when Jace spills juice all over the floor. She worries that they should take Kaiser to the Dr. When Barbara arrives she asks about Kaiser and Janelle freaks out and the two have a huge argument. She tells her mother “Three things I don’t want to talk about : Nathan and custody, you and custody and my pending charge.” Barbara asks her why she is being so rude. Janelle gets angry again and tells her “There you go again being all dramatic and crying.” Finally Barabara tells her “Go get Jace and I’ll go home.”

When Kailyn, Jo and Vee go out to dinner Kailyn tells them about what happened with Javi. Vee tells Kailyn that it feels like Javi hates Jo. Jo wonders if it has to do with the child support issue or something like that. He tells her that he wants to have a talk with Javi. Just him Javi and Vee.

Leah takes Ali to her appointment with the Dr. and things are tense between her, Corey and Miranda. When they met with the Dr. he examines her and tells them Ali is still strong,but that her strength is fading and they need to see about getting her a power wheelchair. Leah asks if they could wait because she wanted to try to do it when Ali was older. The Dr. tells her “We need to do it now because as she gets older she will get weaker.”