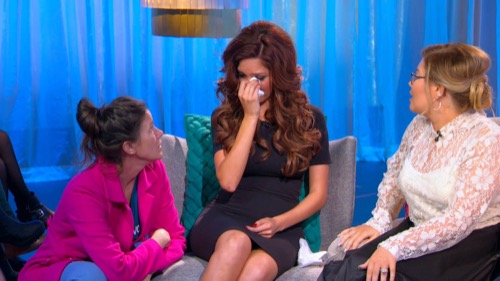 Tonight on MTV their series Teen Mom OG continues with an all new Monday January 18, season 2 episode 4 called “Never Say Goodbye” and we have your weekly recap below. On tonight’s episode, Farrah Abraham struggles with taking Sophia to visit Derek’s family.

On the last episode, Farrah was evicted from a party in the Hamptons; Amber struggled with Gary’s visitation schedule for Leah; Catelynn and Tyler had their bachelor and bachelorette parties; and Maci was upset that Taylor had yet to propose. Did you watch the last episode? If you missed it, we have a full and detailed recap right here for you.

On tonight’s episode as per the MTV synopsis, “Farrah struggles with taking Sophia to visit Derek’s family; Ryan is annoyed that Maci has control over Bentley; and Catelynn deals with anxiety when Nova meets Carly.”

#TeenMomOG starts at Farrah’s house. She says she want to spend time with her before she goes to the UK for work. She says Sophia is asking a lot about her dad. Farrah reads her a story about her dad’s accident when he died. She says it’s near grandma’s house.

Then she shows Sophia a poem that Derek wrote about her. Sophia says her mom looks like she’s going to cry. Amber has Leah with her and she talks about things being tense with Gary since she filed for custody. She and Gary play ball with Leah.

Leah talks to her friend about the case. She says she has a boring life now. Heather asks about her wedding with Matt and she says October 10 of next year. She says her mom doesn’t like Matt and says her brother is cool about it. She says he love Matt and he’s her man.

Amber says she’s been with him for a year and it’s good. Maci and Taylor are in Knoxville with friends for a football game. They are shotgunning beers and Maci says don’t air this or her grandma will kill her. Bentley is with his dad and Ryan complains about Maci.

He says Maci thinks he can’t do homework and won’t let him take his son to school. He texts her and she says no and he asks why and she says because. He’s frustrated. Tyler tells Cate they need to go. She’s having anxiety and Tyler says this started after the bachelor party.

They head out to the wedding location where they’re renting a house. Carly is coming to see them with her parents for the yearly visit. Cate is worried about Butch being there and about Carly meeting Nova. She lies in bed hiding.

Butch wants to sleep in the camper since his ex is there with her new husband. He is uncomfortable and Tyler says he thinks he’s being smart. Butch holds Nova who is covered in food goo. Tyler says Cate is nervous about Carly’s visit.

Tyler is frustrated that Cate is lying in bed. Nova chants dada dada as she pulls Butch’s hair. Leah colors at Amber’s then Gary and Leah make her mom breakfast. They decide to make pancakes. They take breakfast to Amber in bed.

Farrah and Sophia are in Missouri to see Derek’s family. Sophia asks why Simon can’t be her daddy and says she wants a daddy. Farrah says they’re sorry that her daddy died and they have to deal with it. Sophia starts chanting daddy then I want to die.

Farrah says she’s making her sad. Farrah says it hurts her when she says those things. Maci and Taylor are headed home and she’s annoyed about Ryan texting to keep his son an extra night. Maci shows up and Ryan comes out to chop wood. His parents are aggravated.

Maci has to talk to his parents. Bentley’s grandparents tell him goodbye and they go. His mom asks why Ryan didn’t talk to Maci. She says they need to talk to Maci soon. Cate is still freaking about Carly. They work on the seating chart. She wonders if Maci and Taylor are coming.

The producer asks if they invited Farrah and they say no plus she wouldn’t come. Tyler takes Nick and Butch to a campsite away from the house since Butch is uncomfortable. Tyler talks about Brian and Teresa coming to the wedding. Butch wonders how they will take him.

Butch asks Tyler how he’s feeling and Tyler says he’s dealt with it and he just deals with his feelings as they come. Butch says he gets high because he doesn’t deal with things appropriately. Tyler says he tried to kill himself when he was younger. Nick asks what he did. Tyler covers for it.

Tyler says his mom helped him get through it. He talks about walking around school with rope burns for two weeks when he was a teenager. Tyler says he was 12 and Butch had gone back to jail two months before that.

He says he was in trouble at school, suspended, his mom was working all the time and Butch got sent back to jail. Butch starts crying and Tyler says they were all locked up when he was gone. Butch says he’s sorry.

Amber makes sandwiches for Landyn and Leah and Krystal is there. Leah talks about how she went to a haunted house with her “parents” and that annoys Amber since Leah said her parents are Gary and her step-mom. Amber says she may say the same thing to Gary but doesn’t like it anyway.

Gary carries his daughter Emilee in to Kristina and says he got papers from Amber’s lawyer for 50/50 custody. He says he doesn’t know what’s going on and why she’s doing this. He says it’s about what’s best for Leah.

Kristina asks if Leah knows what’s going on and he says he thinks so and made an appointment for Leah to go to counseling. He says they are a good mother and father to Leah and Amber has no idea how much work it is.

Gary says he doesn’t like that he hasn’t got to know Matt and has tried to. Kristina says Matt has kids and he up and left them to be with Amber. Gary says he can’t let Leah get twisted up anymore. Farrah and Sophia meet Jerry, Derek’s dad.

Farrah is teary and says Sophia brought up some stuff in the car that made her sad. She says Sophia is grieving and it’s hard for her. They head inside the restaurant and meet the rest of the family. Debbie, Derek’s mom is there too.

She wants Sophia to sit by her and Sophia says no. Jerry says he’s glad Farrah wants them in Sophia’s life and says Sophia keeps Derek alive. Farrah says she is dating again and won’t settle for someone and says Derek showed her what love is.

Cate and Tyler go see Carly. Tyler says it will be weird to see Nova with Carly. They meet them off camera but there are still pictures shown. Cate says it was really emotional and that Carly kept calling Tyler daddy. He says he didn’t say anything to Brian and Teresa about it.

Cate says Teresa told her she doesn’t want to meet Butch because of the way he treated them over the adoption. She says Carly was really interested in Nova. Maci hands Jayde to Taylor who burps her. She says Ryan is irritated about missing a day because Bentley had a sleepover.

Taylor says this will get tougher as Bentley gets older. Ryan talks to Casey who asks about Maci. He says Maci always wants her way. He says he lost time when Bentley had a sleepover and she wouldn’t let him keep a night extra on the weekend to make up for it.

Ryan says he should get the days made up. He says she went to a mudrunner and his mom watches her baby and with Vegas too. He says she always gets what she wants and says she’s been off since she had the baby. He says Taylor is fine – it’s just Maci.

Casey asks if he would go to court over it. Ryan says it would be bullcrap if he had to do that and just needs to talk to her. He says they need to fix it. Amber puts makeup on Leah and says you can’t wear too much makeup.

Then she lets Leah put makeup on her. Amber takes Leah out to pick apples and invited her mom Tonya to go along. She talks to her mom about the custody thing and says Gary won’t budge at all. She says she set a date for the wedding. Her mom ignores her.

She says October 2016. She asks her mom if she’ll help plan it and she nods. Amber says she has no clue how to plan a wedding. They pick apples then get cider. Tonya asks Matt about the wedding date and she asks if they want a church wedding.

Amber sys yes. Matt says he needs a lightning-proof tux to survive it. Amber says she was engaged four times before but this time is sure. Farrah goes to Derek’s grave. Sophia says she wishes she could see her dad in real life. She asks if her dad is watching them.

Sophia says this is hard and she wants to go back to the car. Debbie and Jerry, his parents, meet them there. Jerry shows her a photo of Derek when he was young. Jerry says she can have the photo. Debbie says Sophia looks a lot like Derek. Farrah is crying again.

He finally shows up to Maci’s house. Maci asks what took so long and Ryan says she was rude for not letting Bentley stay with him the other day. He says she didn’t give a reason. She says he was being ugly and he asks how. She says re-read your text messages.

She says she has no time and he asks when can they talk. She says when he’s available and can show up on time. Cate is struggling with feelings again about the adoption and wedding stress. Tyler tries to calm her down. Cate says she’s just got a lot of anxiety. Producer Jessica talks to her.

Cate says it’s hard to see how much Carly loves Nova. Tyler says they wouldn’t have Nova right now if they hadn’t made the adoption decision. Carly says she’s also scared if things will change when they get married.

Tyler says they’ve been together 10 years so that’s not them. He holds her hands and puts her on his lap while she cries. He says everything will be fine. Gary holds Emilee. We see Farrah and Sophia with Derek’s parents. Bentley plops down for a nap with Maci. Cate and Tyler go sit be the water and cuddle.