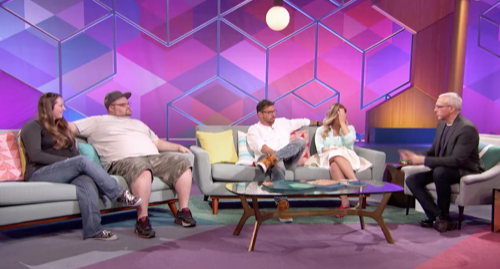 Tonight on MTV their series Teen Mom OG continues with an all new Monday March 7, season 2 episode 12 called “Check-Up With Dr. Drew – Part Two” and we have your weekly recap and review below. On tonight’s episode, conclusion. Catelynn Lowell discusses her depression; Tyler and Butch reflect on their childhoods

On the last episode, part 1 of 2. Dr. Drew met with Maci and Farrah to discuss their emotional journey during the past season. Topics include Maci’s happiness that she and Ryan could finally co-parent; and Farrah’s romance with Simon. Did you watch the last episode? If you missed it, we have a full and detailed recap right here for you.

On tonight’s episode as per the MTV synopsis, “conclusion. Catelynn discusses her depression; Tyler and Butch reflect on their childhoods; and Amber and Matt confront Gary about how he exposed Matt’s numerous child support cases.”

On part two of the Teen Mom OG Finale Dr. Drew sits down with Caitlynn and Tyler. They start the show with a walk down memory lane from this past season. Dr. Drew asks them what they think about watching that back. Catelynn says “We have been through a lot but we have handled it with grace and maturity.” Dr. Drew asks if they talked about the fact that Carly called Tyler Dad. He asked if they talked about it. They both responded “No.” Dr. Drew then asks them about Butch and how they managed to create a safe environment for his sobriety. Both Cate and Tyler admitted that it has not been easy, but Butch told them “It’s ok. I am going to have to deal with it anyway.” Dr. Drew then moves on to Tyler’s suicide attempts. Tyler admitted that he had tried to commit suicide by hanging himself in the backyard. “I tried to commit suicide by hanging myself from a tree. I thought when I jumped my neck would snap,” he tells Dr. Drew. They also briefly talked about the fact that after that didn’t work he became a cutter and nearly slit his wrists.

Up next Dr. Drew brings on Butch to join the conversation. Dr. Drew informs everyone that Butch was not allowed to travel to the show as a condition of his parole. He then asks Butch about how hearing Tyler’s story about trying to commit suicide. Butch said that it “tore him up.” Dr. Drew addresses Butch’s issues with Catelynn and Tyler putting Carly up for adoption. Butch says that he is proud of Catelynn and Tyler. He also says that “Tyler is his therapist and they have deep conversations.” Dt. Drew reminds him that Tyler is not his dad. Butch recognizes this and they move on to talk about how Butch lost his mother when his father threw her through a window. Butch talks about his time in prison and Dr. Drew commends Butch for staying clean.

Dr. Drew and Butch talk about his meeting Carly for the first time at the wedding. Butch says “It wasn’t planned, but I was walking through the courtyard and saw her and decided to shake her hand. They were pulling her away like I had the plague and I didn’t appreciate that.” Dr. Drew tells him to think of that as a consequence of his actions and that he would earn everyone’s respect. Butch tells Dr. Drew “My life is a gift from God and what I do with it is a gift back to him.” Tyler and Catelynn seem happy to hear this and before they sign off they tell Butch how much they love him.

Next Tyler and Catelynn are joined on stage by their mom’s Apryl and Kim. Dr. Drew mentions that Kim was getting emotional as they had been talking to Butch. They talked about the fact that they had to get two cakes so that Butch could see Nova blow out her birthday candle. Dr. Drew talks to Dawn about seeing Tyler with rope burn from ear to ear. Dr. Drew mentions that Dawn recognized what was happening to Catelynn. Dawn said that she was afraid to address Catelynn because “I knew that she wasn’t going to like what I needed to say to her.” Catelynn admitted that there were days that she “didn’t want to wake up feeling like this anymore.”

Next Dr. Drew sits down with Amber and they watch the video review of her part of the season. Dr. Drew asks her about the custody arrangement and Amber tells him “We have worked out an agreement for joint custody and everyone is happy.” Dr. Drew asks her about the situation with Matt. She says that she felt “shell shocked” when she learned about the fact that Matt had seven kids. She wondered who she got involved with. Dr. Drew asks about her and Gary and Amber says they should bring out Gary. He comes out and they talk about the situation with Matt. Gary says “I want Amber to be happy.” Amber jumps in and disputes this. She says “Gary brought those papers out on TV on purpose to discredit me because of the custody battle. Gary denies this and Dr. Drew asks if Gary can see a difference in Amber. Gary says “Yes she is much more pleasant to be around and I like her highlights.” Dr. Drew asks about how Matt feels about what Gary did . Amber says it is best to ask Matt.

When Matt comes out Dr. Drew asks Matt what he thinks about what Gary said. Matt says that “What Gary did was more for the camera than for Amber. If it had really been about Amber he would’ve called her instead of waiting for the cameras.” Dr. Drew asks how many kids he has. Matt tells them there are only five, not seven, Matt says that the other two kids were a “fallacy.” Amber says that she told Matt that “this was not something he could run from and I watched him cry.” Amber says she is “frustrated because Matt’s ex girlfriends call her and tell her what an awful person he is.”

Gary and Kristina join them onstage and Matt confronts him about howh he handled the information he’d found. The two men get into a heated discussion and Amber gets angry. She tells Gary “Don’t take his kindness for weakness.” Dr. Drew has to move and sit between the two men because it becomes so heated. Amber says that “Their relationship is not going anywhere and people need to stop acting like they are breaking up because they are getting married.” Dr. Drew asks Krisrina how she feels about being thrust into the middle of all of this. She says “I am here to support Gary and that’s the only reason why I am here.”

Up next all four teen moms are on stage together. Dr. Drew congratulates the girls on creating this whole Genre. Dr. Drew asks the girls about the issues. Farrah and Maci say that they have put their differences aside. Amber mentions to Farrah about a video that was put out on social media where they were just having fun and how upset she was that something she said was misconstrued. Catelynn and Farrah engage in a small skirmish and it ends quickly. Amber is trying to remain neutral because she is friends with all of them. Catelynn says that “Farrah doesn’t like me and I don’t really like her.” Dr. Drew asks if that was why Farrah was not at her wedding. Catelynn says “Why should I invite someone who doesn’t like me?” Farrah and Catelynn both apologize to each other. Dr. Drew then asks what the girls are using for birth control and the answers vary from IUD’s to the Depo shot. The show ends with al of the girls significant others and their children coming out on stage.