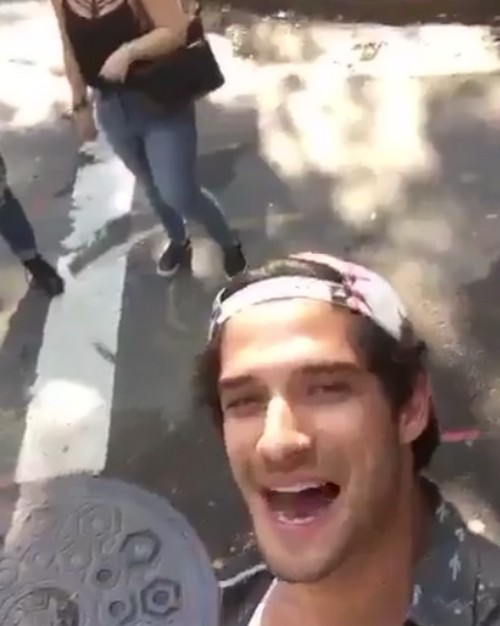 Teen Wolf actor Tyler Posey has come out as gay. Whether the 24-year old is serious about his admission is unclear. Yes, Posey has outraged some across social media while others are posting their support for the performer.

According to Fusion, Tyler Posey dropped a video on his Snapchat account where he makes his way towards a street sign that reads Gay St. in New York City. Focusing in on the street sign before turning the camera on himself, Posey declares, “This is me. I am this and this is me. I’m gay! I’ve never felt more alive. I’m gay!”

Posey’s approach to announcing that he is gay has some wondering if it is just a prank. He’s known for joking around and clearly Posey’s coming out video is a bit unorthodox. But who are we to judge? Maybe a formal speech, like some given by his Hollywood counterparts, wasn’t for him.

Up until now, if Posey is gay, the vocal actor has managed to keep a low profile when it comes to his sexual preference. The child star appeared in a documentary on MTV where he touched on the topic of the dating app Tinder and the gay app for men, Grindr.

“Is it like Grindr for straight people?” he asked. “I know what Grindr is because I have an account.”

This past May, Tyler Posey also posted a picture of himself in his underwear on Snapchat. It seems in recent months the actor is all about being himself.

“Just posted a snap that I’ll probably regret,” he captioned the photo. “But I did it anyway because it’s who I am. Moral of the story? Be yourself. Change the world;),” he then posted to Twitter.

At the moment, Posey is reportedly single. Tyler was previously engaged to his fiancée Seana Gorlick. The two split back in 2014 after spending a decade together. “I still really miss her. … I can’t believe I have an ex-fiancée.”

Could Posey and Gorlick have called it quits because Posey is gay? Or is his coming out a joke? While some fans are thrilled, calling Posey’s coming out cute, others are enraged at his insensitivity to the gay community. The actor or his reps have yet to confirm if the Teen Wolf star is in fact actually gay. If he is not, we see a huge apology in his future.