BY Stormy Elizabeth on May 12, 2016 | Comments: one comment
Related : Recap, Television, TV 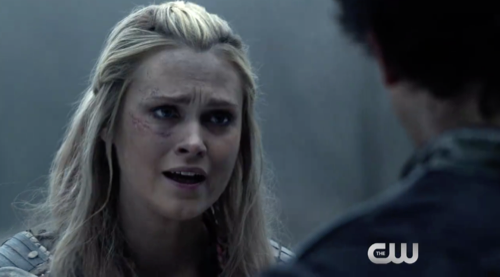 Tonight on the CW The 100 returns with an all new Thursday May 12, season 3 episode 15 called “Perverse Instantiation: Part One.” On tonight’s episode, part 1 of 2. Clarke (Eliza Taylor) finds hope in an unlikely place.

On the last episode Clarke (Eliza Taylor), Bellamy (Bob Morley), Octavia (Marie Avgeropoulos) and Jasper (Devon Bostick) hit a tragic roadblock. Did you watch the last episode? If you missed it, we have a full and detailed recap right here for you.

Tune in tonight to catch the season 3 episode 15 of The 100 on CW – we’ll be right here recapping it for you live!

#The100 starts with Clarke pacing while they wait for the rover to charge. Bellamy says they have to regroup and she says we need a night blood. Jasper asks if they should walk into villages asking for night bloods.

Octavia says she won’t let her destroy another Grounder village. Clarke says with no night blood and no commander there will be no more Grounder villages. The others want to go back to Arkadia. Clarke walks into the woods.

Clarke looks at the box that holds the flame and says sorry. ALIE is there and says bring her to me with the flame. A guy sneaks up on her but Roan shoots him and saves her. He says he’s been following her and takes the flame.

She pulls a gun and he says she has a gratitude problem. She begs him to hear her out and says they need a night blood to put it in. He says Ontari never ascended because of her. Then Bellamy gets the drop on Roan and he has to put his hands up.

Clarke says Roan is coming with them because they both want to put the flame in Ontari. Bellamy wonders if he’s chipped but Clarke says he would have killed him. Bellamy shoots him in the arm and he screams in pain. Bellamy says now we’re sure.

They get back to Arkadia and Monty secures the fence. Raven asks where’s Luna and they tell her she said no. They have Roan and Clarke says he’s the king of the Ice Nation. They lock him up inside. Raven asks if her plan is to get to Ontari.

Jasper says Bellamy shot him and Monty assumes he won’t cooperate. Clarke comes into the brig to talk to Roan later with Bellamy. Roan glares. He says sorry about your arm. Roan says they’re even. Clarke says they need each other.

Clarke says it has Ontari already and Roan listens. Clarke says they have to disconnect her then give her the flame. She says they need to abduct her from a city full of hive mind people. Roan says he gets it. He stands and says when do we leave.

The gang runs through the plan. Raven has to get to the code with Monty while Clarke gets the night blood. Octavia and Roan load up. ALIE  is there – and she tells Ontari they are using the king. Ontari says they’ll bring the flame right to us.

The gang stops. Looks like ALIE may be in Harper who was left behind. The team stops away from Polis and they split up. Roan says he needs the flame to bait the trap. Clarke hands it over. She insists on coming with him and Bellamy says no.

Clarke says that’s the new plan. She says she can’t let the flame out of her sight. Roan says she has to look like his prisoner and Bellamy is upset that she trusts Roan with her life. Clarke says she trusts Bellamy to cover her the whole time.

Jasper and Monty are looking for a mother board. Jasper is clueless. Harper spies on them while Monty explains the plan. Jasper asks what if it doesn’t work. Jasper then asks him about Harper and says he’s happy for him.

Monty stares at him and says he’s never happy. OMG is the chip in Jasper? Jasper talks about how Mt Weather changed him and he blamed him and Clarke for it but he’s done. They embrace. Monty says he’s glad he’s back.

Jasper stabs Monty and he runs and takes shelter with Raven and says Jasper was chipped and stabbed him. Raven is stunned. They try to radio Bellamy and see the wires were cut. Jasper tells Monty to let him in. Monty says they’re walking into a trap in Polis.

Roan takes a tied up Clarke with him into Polis and Bellamy and Octavia take up positions. They have eyes on them. Roan reveals he has the flame. Bellamy and Octavia are grabbed by some of ALIE’s men. Jaha comes out and takes Clarke and Roan captive.

Raven and Monty work on solutions while they still have Jasper locked out. Monty is worried about Harper because she doesn’t know Jasper is chipped. Jasper thumps at the door and says let me in so we can talk.

She says as long as he’s at the door, he’s not looking for Harper. Monty tells him to talk but doesn’t let him in. Jasper says he’s glad he’s okay and didn’t want to hurt him. Monty says he doesn’t blame him since he was tortured.

Jasper says that’s not why he took the key. He says Luna’s rig was peaceful and safe with happy people. Jasper tells Monty that ALIE can take away all his pain like he did his. He asks again for him to open the door so Raven can’t ruin this for everyone.

Jaha has Clarke and Roan hauled inside and Abby is there and hugs her. Clarke tells her she’ll never take the chip. Abby says right now, we just need your help with the flame. Clarke won’t help them. Jaha says she’s stubborn like her mother.

They hold Clarke down and Abby says she’ll do this. She has a scalpel and goes to Clarke where she’s been tied up. She asks for the flame pass phrase. Clarke doesn’t’s tell her. Abby presses the scalpel into her flesh. Clarke says this isn’t you – I know you’re in there.

She says please. Abby asks again. Clarke shakes her head. Her mother slides the scalpel into her again. Jaha tells Clarke it can stop as soon as she tells them. Abby says – I told you. She says Clarke’s friends are her weakness.

Abby tells them to start with Bellamy. Murphy comes to Bellamy and Octavia’s rescue with Indra and Pike. Bellamy is stunned but thanks them. Murphy tells Nathan he looks rough then helps them up. Indra tells Octavia they have to work together.

Octavia says it’s suicide but Bellamy says they won’t have to fight their way out if they stop ALIE. They give the kids weapons and Murphy says great let’s go up the tower. He says after this, doing the right thing can kiss my ass.

Bellamy and Murphy go up and Octavia stays with Pike and Indra down below. They all three crank the elevator to take them up. Murphy asks if he knows they’re screwed because ALIE knows they’re coming. Bellamy asks why he’s there and Murphy says trying to survive.

Then he says he’s trying to save someone he cares about too. Indra and Octavia watch as Pike and Nathan crank the elevator. Octavia asks Indra why Pike is still alive and she tells her that the dead can’t help us. Octavia tells her Lincoln was her home.

Indra says your home is here. Kane comes in shooting and the elevator starts to drop. Indra knocks him out but Pike was shot and so was Bryan. Nathan checks on him. Grounders pry the doors open and Bellamy and Murphy fight them off.

Pike says back to the wheel. Nathan sets off a blast to seal the corridor and give them shelter while they work. The elevator starts moving and Bellay attacks a Grounder in the elevator with them then Murphy joins in. Bellamy has no choice but to shoot him.

ALIE tells Clarke her friends are resourceful. Jasper reads off a list of fatalities to Raven and Monty that Clarke killed or the Grounders did. Raven makes it back into the code and starts looking around but Monty is in pain.

Harper comes to the room and Monty tries to warn her about Jasper but he knocks her out. Raven tells Monty not to open the door. Monty threatens Jasper if he hurts Harper. Jasper says destroy the machine and she’s fine. He tells Monty he doesn’t want him to lose anyone else.

The elevator is almost at the top and Octavia and Indra are now helping. Jaha fashions a noose and Abby tells her it’s not for her. Abby goes up to put her neck in the noose and tells Clarke she knows how to stop this. Clarke tells ALIE if she kills her, she won’t get what she wants.

Abby asks for the pass phrase and Clarke says she can’t. ALIE tells Abby to do it. Abby jumps and twists at the end of the noose. Clarke cries and says sorry. The elevator is at the top. The team down below sets the bomb and gets ready to climb.

Kane comes too and calls to Indra. She says get back and Indra goes to save him. The bomb goes off down below as Octavia screams her name. ALIE tells Ontari they can’t let them have her. She picks up a sword. Clarke says stop.

The guys drop knock-out gas into the area. Clarke tells Jaha to stop this. Jaha knocks out Ontari and Clarke tells for Bellamy to stop him while Murphy cuts down Abby. She tells them to get the flame from Jaha. Clarke goes to work on her and says she’s brain dead.

She says she can’t give us the kill code. Clarke says it’s over. Murphy says they’re trapped there. Bellamy and Clarke realize it looks hopeless.