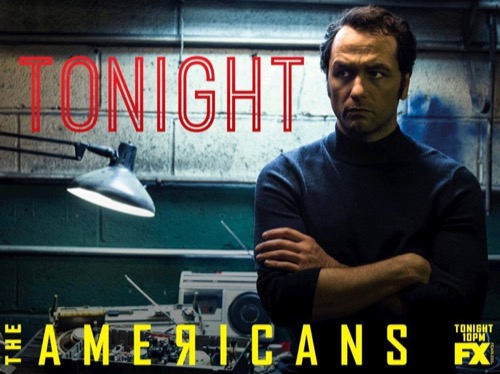 Tonight on FX The Americans airs with another all new Wednesday, March 16 season 4 premiere called “Glanders,” and we have your weekly recap below. On tonight’s episode, in the fourth season premiere, Philip (Matthew Rhys) and Elizabeth (Keri Russell) face the fallout from their previous actions and get a new bioweapons assignment.

On the last episode Elizabeth and Paige took a trip that lands them in treacherous territory. After an emotionally charged mission, Philip turned to an unlikely source for solace. Stans planned to save Nina culminates in unforeseen ways. Written by Joel Fields & Joe Weisberg; directed by Daniel Sackheim. Did you watch last week’s episode? If you missed it we have a full and detailed recap, right here for your enjoyment.

On tonight’s episode per the FX synopsis “picking up on the heels of last season’s finale, the season 4 premiere of The Americans sees Philip and Elizabeth dealing with the fallout of all they’ve wrought. What will happen when the FBI finds out about Gene’s suicide? How will Pastor Tim deal with the revelation that they are Russian spies? And will they be able to handle a dangerous, new bioweapons assignment?”

Tonight’s premiere episode looks like it is going to be a great and you won’t want to miss it, so be sure to tune in for our live coverage of FX’s “The Americans” Season 4 premiere– at 10 PM EST! What do you expect to happen in the upcoming fourth season of The Americans? Sound off in the comments down below what you think!

Tonight’s episode of The Americans kicks off with Phillip lying in bed late at night, and having flashbacks to his childhood. He recalls killing another boy, and beating him to death with a rock, he was splattered with blood. Elizabeth can tell Phillip is not sleeping well, and asks him what is wrong. He tells his wife it’s about Martha – he needs to come clean with her before she finds out about Gene at work.

Phillip slips in to Martha’s house in the middle of the night while she is sleeping. He wakes Martha up and warns her that she is going to get some bad news at work – Gene Craft is dead. Phillip says that it will look like he killed himself, and the recorder will be found in his apartment. It takes Martha a moment to process things – but she realizes that Phillip is saying he killed Gene so he would take the fall. Martha starts sobbing – Phillip tries to explain that it was the only way to protect her. Martha starts crying and tells Phillip to stay away from her.

The next morning Elizabeth finds Paige in the kitchen bright and early – Paige heard her dad leave home at 3:00 AM and wants to know what happened, she knows that her parents are spies now. Elizabeth explains that her dad had to meet with a source, he is trying to build trust. Paige is concerned it may be dangerous, Elizabeth reassures her that she will be just fine.

Martha wakes up on the couch and Phillip has been watching over her while she slept – she says that she doesn’t have a choice, she will look suspicious if she doesn’t. Phillip explains to Martha that he isn’t going to be able to come back to her house because Stan is suspicious, but he reassures her that it won’t change anything – they are still going to see each other.

Meanwhile, Stan is up bright and early while his girlfriend is getting dressed. She wants to know why he isn’t rushing to work. Stan explains that his boss thinks that he should be executed, and he doesn’t have a whole lot of friends left at work. His girlfriend advises him to set down with his boss and have an adult conversation about it.

At school, Paige seems to be not handling the whole “my parents are spies from the Soviet Union” thing well. She waits in the hall way while they say the pledge of allegiance and doesn’t participate, and then she rushes in just as the bell is ringing.

Elizabeth and Phillip meet with their handler Gabriel, he is not happy with them that Elizabeth and Paige went back to Russia after he told them not to. Elizabeth says that it was something that she had to do, and it was what was best for Paige. Gabriel threatens to retire and go home if they don’t start listening to him – they’re making him look bad.

Gabriel explains that the Soviets signed treaties with the US to not make biological weapons, but they think that the Americans are making them, so they do too. There is a handler named William who has been bringing the Soviets pathogens for years. Elizabeth and Phillip need to meet up with William and get the next package. Gabriel has to give them vaccination shots so that they don’t catch meningitis from the package. He warns Elizabeth and Phillip that someone has been following William, and he may be under surveillance, when they meet up with William, it is their job to get to the bottom of it.

After school, Paige heads to church – she tells the pastor her parents’ secret, that they are spies. She makes her pastor swear that he won’t tell any one else.. ever. He wants Paige to have her parents come in for a family meeting, but Paige says that is not an option and her parents can never know that she talked to them. He tells Paige that she should find out more about what exactly it is her that her parents eat and then come back to his office.

Later that night, Phillip and Elizabeth put on hideous wigs and disguises and head out undercover. They are trying to track down William, but Phillip gets cold feet and right before they are supposed to meet William, he drags Elizabeth away from the restaurant. Elizabeth is confused – she wants to know what Phillip saw. He confesses that he didn’t actually see anything, he just got a “bad feeling.” Elizabeth is obviously suspicious – Phillip hasn’t been himself lately.

Philip heads to group afterwards, and he talks about the kids that bullied him and confesses that he got in a fight with them when he was a kid – he leaves out the fact that he actually killed them with a rock. After group, he gets coffee with one of the women, Stan’s ex-wife Sandra, and she encourages Philip to talk to his wife about his problems. While they are laughing and giggling, Stan’s girlfriend is sitting a few tables away and recognizes Philip and is surprised to see him with another woman.

Philip and Elizabeth head undercover again to try and meet William. They are driving down the street, and William is just a few feet away. As Philip is about to pull over, Elizabeth tells him to keep driving. She thinks he is right, they are being followed – she spotted a suspicious green station wagon.

Martha gets out of work and Philip is waiting for her, she bursts in to tears and says that everyone at work knows about Gene and they are running around like crazy. Philip reassures her that they are safe, and no one is going to trace anything back to them. Martha starts crying all over again, and wants to know how Philip killed Gene. He doesn’t go in to details, but he tells her that Gene’s death was fast and painless.

At work the next day Stan corners Martha at the copy machine and offers his condolences for Gene’s death, he says “I know you really like him a lot.” Martha stares at him blankly and replies, “I guess you never really know people, do you?”

Philip gets a stack of surveillance assignments that Martha stole from the office. Philip was imagining things, no one from the FBI was assigned to watch William the first night. But, Elizabeth was right –there was someone in a station wagon following William. They meet up with William that night, he says that he just got a package from Fort Detrick and it came along with a whole bunch of FBI surveillance. He gives the package to Phillip and tells him to get it to Gabriel in 48 hours, and keep it in the freezer over night.

Philip and Elizabeth head home, and Stan corners them in the garage. He says he needs to talk to Philip alone. Stan demands to know if Philip is screwing Sandra – his girlfriend Tori told him that she saw him at the restaurant. Philip confesses that he went back to group without him and ran in to Sandra and they got coffee afterwards, it meant nothing. Stan isn’t buying it, he slams Philip in to the wall, and then shouts “Screw You!” as he storms out of the garage.