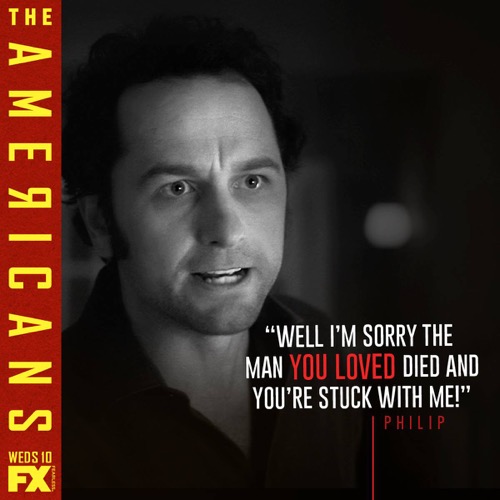 Tonight on FX The Americans airs with another all new Wednesday, May 11  season 4 episode 9 called “The Day After,” and we have your weekly recap below. On tonight’s episode,  Elizabeth (Keri Russell) tries to complete the “Patty” operation.

On the last episode the Jennings’s approached their breaking points as both Philip and Elizabeth must handle loyal agents. Did you watch last week’s episode? If you missed it we have a full and detailed recap, right here for your enjoyment.

On tonight’s episode per the FX synopsis “making the stakes – and terrible consequences – of the Cold War plain. Even with that in mind, will Elizabeth be able to complete the painful process of the “Patty” operation?”

Tonight’s episode looks like it is going to be a great and you won’t want to miss it, so be sure to tune in for our live coverage of FX’s “The Americans” Season 4 episode 9 – at 10 PM EST!

Tonight’s episode of The Americans kicks off with Philip in the car, Paige is behind the wheel and he is giving her a driving lesson. Paige whines that the car is huge, and tries to convince her dad that he should buy her a Camaro.

Elizabeth is at her friend Young Hee’s house – Young Hee is ranting about her kids, and how much they have been acting up. Talk turns to how strict Young Hee and Elizabeth’s moms were – they never would have been allowed to act the way their children do now.

Paige manages to get herself and Philip home in one piece. While they are still in the car, Paige says that there is a going away thing for Pastor Tim at the church before he goes to Ethiopia. She thinks that the whole family should go with her because Pastor Tim likes to see them act “more normal.”

Philip heads to the gym withstand to play a game of squash – Stan jokes that Philip is on fire lately, he asks if he has been taking Vitamins. Philip says that he has just been getting more sleep lately because he and Elizabeth got rid of some of their accounts. Stan reveals that he and Tori broke up, he liked Tori a lot … but she just wasn’t Sandra. Stan says that he has to leave early – he has a new boss since Gaad retired and he is a “real hard ass.”

Elizabeth gets home from the store – she says that there was a signal at William’s site, William didn’t tell Gabriel, he is going behind the Center’s back to see them. Philip thinks they should go and see what he wants. Philip heads to the park to see William, William seems upset because he hasn’t seen or talked to Philip in a while. Philip says that they have been on a break for months.

William says that he is sorry to interrupt their vacation – but they just got something new in, a modified form of the Lassa virus, it’s a Level 4 and makes you bleed through your skin. William says it is the worst thing that he has ever saw, and he doesn’t want to handle it, he is thinking about not telling the Center about it. William whines that he doesn’t trust the Russians with it.

Later that night Elizabeth, Stan, Philip, and the kids sit down to watch a special program on TV called “The Day After.” It was a pretty controversial TV special that depicted what would happen in the even of a nuclear war between Russia and the US. After the show is over, Philip tells Elizabeth that he thinks William might be right – they should not tell the Center about the Lassa virus. Elizabeth disagrees – she reminds Philip that it liquefies your organs, and the US is probably going to use it on the Russians. They need to get a sample of it to the center so they can work on developing an antidote.

Meanwhile, Oleg and Tatiana have sex for the first time. Afterwards, Tatiana jokes about how quiet she is during sex because she used to have to sneak around – she lived with several family members. They wind up talking and Oleg tells Tatiana a story about his father, apparently Russia nearly launched nuclear missiles at the US because they thought the US had fired five nuclear missiles at them. It turns out that their software was wrong, and the “missiles” was actually just the sun reflecting off the clouds.

At home, Philip and Paige are cleaning the kitchen. Paige is still upset about the “Day After” movie that they watched. She quizzes her dad and wants to know if what happened in the movie could happen in real life. Philip reassures Paige that he and her mother work hard to try and stop a nuclear war like that from happening.

Philip meets up with William – he tells him that he and Elizabeth discussed it and they think that William should tell the Center about the Lassa Virus. William doesn’t seem thrilled about it. Meanwhile, Elizabeth calls Young Hee’s house from a payphone – her husband Don answers the phone. Elizabeth tells Don that she went out with a guy and got in a fight with him and he left her at the restaurant. Don tells Elizabeth not to move and says that he is coming to rescue her.

Philip heads to the church event with Paige to see off Pastor Tim. Paige runs off to see pregnant Alice. Tim takes Philip aside, he says that he is worried about Paige, she seems really sad lately. Apparently, Paige’s act is not convincing Pastor Tim, he sees right through her.

Elizabeth convinces Don to come upstairs to her apartment with her and help her move a piece of furniture. Afterwards, she flirts with him and pours him a class of wine, and drops a pill inside of it. They start talking about Elizabeth’s crappy dating record – and discuss how he and Young Hee fell in love.

Then, Elizabeth makes her move and kisses Don. He jumps up and says he has to go, then he passes out and fell on the floor. Once Don is passed out, Elizabeth puts him in her bed and strips off all of his clothes. Then she gets undressed and climbs in to bed with him.

Philip apparently took what Pastor Tim said to heart, and decided to spend some quality time with Paige. He tells her that she can do her homework later, and surprises her with another driving test… this time in his beloved Camaro.

Don wakes up, naked and confused. He freaks out when he sees Elizabeth in bed with him – he gets up and gets dressed and says that he is “sorry” and runs out of the room. Elizabeth lies in bed by herself, it looks like she might actually have a conscious and feel a little guilty.

Elizabeth heads home and Philip follows her upstairs. She is nearly in tears, and tells Philip that she is going to miss her friend Young Hee.