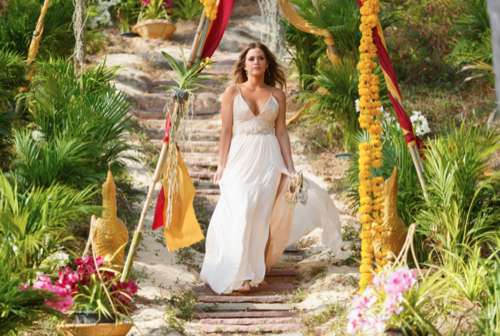 The Bachelorette 2016 airs on ABC this evening with an all new Monday, August 1 season 12 episode 12 called “After the Final Rose,” and we have your weekly The Bachelorette recap below. On tonight’s episode, JoJo recaps the season in a live interview with host Chris Harrison. Joining her are final two bachelors Jordan and Robby.

On the last episode, JoJo survived being blindsided last season after Ben Higgins told her he loved her, but proposed to Lauren Bushnell instead. As heart-wrenching a rejection as that was, she decided to take a risk for a second chance at finding love with one of 26 intriguing bachelors. After surviving shocking twists and turns and a journey filled with laughter, tears, love and controversy, JoJo narrowed down the field to two men – Jordan and Robby. Did you watch The Bachelorette finale? If you missed it, we have a full and detailed The Bachelorette recap right here for you.

On tonight’s show as per the ABC synopsis, “emotions run high as JoJo sits down with Chris Harrison, live, to talk about her two final bachelors from this season – Jordan and Robby. She will take viewers back to those final days in exotic Phuket, Thailand, when she needed to make her life-changing decision. Both men will return to sit with JoJo and discuss the shocking outcome of the show and their relationships. It’s the unpredictable ending to JoJo’s adventure to find true love.”

Tonight’s After The Final Rose show kicks off with Bachelorette host Chris Harrison. Chris introduces Jojo Fletcher’s runner-up, Robby Hayes, it’s the first time he has appeared on television since he was dumped by Jojo.

Robby says that at the rose ceremony, he was totally blindsided and shocked when Jojo dumped him and sent him home. He’s confused and disappointed, he and Jojo had made so many plans for their future together. Robby admits to Chris Harrison that he was so confident that he was getting the final rose, that he thought that Jojo had already sent Jordan home before the final rose ceremony.

Chris asks Robby what he thinks happened to make Jojo choose to give Jordan the final rose. Robby laughs that he is just as confused as everyone at home watching the show is, and he has no idea why he isn’t engaged to the Bachelorette right now.

Chris Harrison brings Jojo out on the stage so that Robby can confront her for the first time since their awkward break-up. Robby puts Jojo on the spot, he wants to know why she would say that she loved him at the final rose ceremony and then send him home. Jojo explains that she did love him, and she doesn’t want to take it back, Robby thanks her for being honest with him and hearing that she loved him “kind of helped him sleep at night.” Jojo is brutally honest, she tells Robby that no matter what she felt for him, “her heart was always with Jordan.” She goes on to say that she loved Robby, but it wasn’t “that kind of love.”

Jojo and Robby end their talk on a good note – at the end of the day, Robby just wants Jojo to be happy, and if Jordan makes her happy, then he is okay with the way that everything worked out.

Chris Harrison changes the subject and asks Jojo who she thinks should be the next Bachelor. Before Jojo really gets a chance to answer, Chad Johnson stands up in the audience and interrupts. Chad says that he wants to be the next Bachelor, he apologizes for the way that he acted and says that he had a tough time this year with the death of his mother, and the thinks that everyone deserves a chance at love. Chris Harrison jokes that they will “see how paradise goes tomorrow night.” Then he adds that it is a total trainwreck.

Talk turns back to Jojo and Jordan. Jojo gets a little emotional and she explains to Chris that she feels like no one is really supporting them. All of the other couples have received support from fans and other members of the franchise, but she feels like everyone expects them to fail. Jojo goes to complain about the tabloids, and how hurtful the media has been.

The Bachelorette 2016 winner Jordan Rodgers finally joins his fiancé Jojo on the stage. Jordan raves about how well they have been doing since the final rose ceremony. He says that they have had some tough conversations and were able to grow from it and take it to the next level. Jojo brags about how amazing their families have been, and how supportive.

Chris asks Jojo and Jordan about all of the tabloids, and calling Jordan “a fraud.” Jojo says that she has learned not to “read that garbage.” Chris shares the new cover of People Magazine, which features them on the cover, and for once with a positive headline.

Jordan and Jojo reveal that they are moving in together now that they can be seen in public together, they already have a house in Dallas and his bags are packed. They have already talked about the wedding, they plan on getting married next year but they haven’t picked a date yet.

Chris Harrison puts Jordan on the spot and asks him about his drama with his brother Aaron. Jordan kind of dodges the question and says that he and Jojo’s focus isn’t with his rift with his brother, he and Jojo have more important things going on – like picking out furniture for their new house.

Ben Higgins and his fiancé Lauren Bushnell are in the audience – Ben gives Jojo and Jordan some advice on going public. He tells them to stay strong through the criticism.

Before the After The Final Rose show ends, Chris Harrison of course promotes Bachelor In Paradise and shares a sneak peek of the Season 3 premiere, which will be airing tomorrow night on ABC.