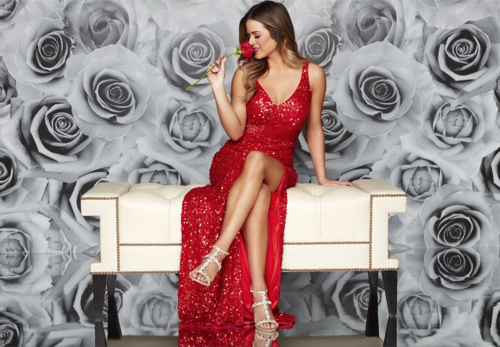 The Bachelorette 2016 airs on ABC this evening with an all new two hour special Monday May 23 season 12 premiere and we have your weekly recap below. On tonight’s episode, season 12 begins with JoJo Fletcher getting advice from former Bachelorettes Kaitlyn Bristowe, Desiree Hartsock Siegfried and Ali Fedotowsky before welcoming 26 bachelors to the mansion.

For those of you who don’t know, successful and stunning real estate developer JoJo Fletcher, 25, gets a second chance at her happily-ever-after, choosing from twenty-six handsome bachelors. JoJo will embark on her own journey to find her soul mate.

On tonight’s show as per the ABC synopsis, “a long, exciting night awaits JoJo, but first, a trio of former Bachelorettes: Kaitlyn Bristowe, Desiree Hartsock Siegfried and Ali Fedotowsky, return to offer some practical advice on how Jo Jo should handle the jitters, drama and emotional pitfalls as she searches for her future husband. They warn her that there is a big difference between red hot chemistry and love.

A nervous but beaming Bachelorette is blown away by the lengths some of the bachelors go to create a memorable first meeting. One southern gentleman uses his guitar to charm JoJo with a song he wrote for her. A DJ brings a classic R&B group, All-4-One, to serenade her. One shy man shows off his Scottish heritage – and legs – by wearing a kilt. But one bachelor really stands out by riding in on a unicorn, harkening back to JoJo’s own entrance.”

Tonight’s episode of The Bachelorette kicks off with our Season 12 star – Jojo Fletcher. Jojo recalls how badly Bachelor Ben Higgins broke her heart. She looks at it as a learning experience though, she’s grateful for what she and Ben had, but now it is time for her to find love like he did with Lauren Bushnell.
Some former Bachelorettes stop by the mansion to help Jojo get ready for night one and the limo entrances. Kaitlyn Bristowe, Desiree Hartsock, and Ali Fedotowsky give Jojo some advice. Ali thinks that Jojo shouldn’t get caught up by the “hotness” of the guys and should focus more on compatibility.

They tell her that if she knows there is a guy she likes in the first week – she should put him on the backburner, and get to know some of the other guys too. Jojo confesses that Ben really hurt her when he said he loved her and didn’t mean it – she wants to make sure she doesn’t do that to anyone.

After her chat with Kaitlyn, Ali, and Desiree, Jojo Fletcher heads upstairs to get ready for night one – and the always entertaining limo entrances. Before the guys step out of the limos, Chris Harrison gives us a sneak peek of some of the Bachelors that will be competing for Jojo this season. Jojo has a mixture of former athletes, oddballs, business men, hot firefighters, farmers, and even a Marine.

It’s finally time for Jojo Fletcher to meet the 26 guys that she will be dating this season. Chris Harrison gives her a pep talk before the first limo arrives. She tells Chris that she is “more ready than she has ever been.”

Jordan Rodgers is the first to arrive – he tells Jojo that his parents have been married for 36 years. She gushes about how “amazing” he looks, and Jordan jokes that she doesn’t need to meet anyone else.

Derek, a commercial banker from Florida is next. He’s dressed in a suit and hasn’t brought along any gimmicks. He tells Jojo that he was blown away by her sense of self when she was on The Bachelor.

Grant, a 28 year old firefighter from California gives JOjo Fletcher a hug. He promises her that he won’t do what Ben Higgins did to her last year – and he only came to fall in love with ONE girl.

James introduces himself and tells Jojo Fletcher that he didn’t come for a rose, he came for a relationship.

Bobby, a former competitive swimmer has brought a gift – a bottle of wine. He says it is a Fletcher family tradition to drink straight from the bottle, they both take a couple swigs and he promises to finish it with her inside. Jojo laughs that he mom is going to like him.

Alex, a US Marine from California arrives next. He introduces himself and confesses that he is really nervous. Jojo gives him a pep talk and tells him he doesn’t have anything to worry about because he “looks very handsome.”

Will climbs out of the limo next, he waves to Jojo and drops a bunch of cards that he was carrying…awkward. He’s a 26 year old civil engineer from New Jersey. He was supposed to read what was on the cards, but now they are out of order. He tells her that she is “the most beautiful girl in the world.”

Chad, a real estate agent from Oklahoma climbs out of the limo next. He gives her an awkward hug and tells her that they are “going to have a good time.” Jojo compliments how nice he smells.

Daniel, a 31 year old hailing from Canada is up next, he makes a cheesy joke about things from Texas being bigger and better, and says about like “aboot.”

Ali, a bartender from California is the next Bachelor to hop out of the limo. He raves that Jojo is “breathtaking,” he can’t wait to get to know her and promises to talk to her more inside.

James Taylor, a singer from Texas hops out of the limo with his guitar and serenades her with this guitar. He sings a cheesy song to her about them going on dates together, Jojo is thrilled, apparently she is a huge fan of country music.

Jonathan, another Canadian, is up next. He’s wearing a kilt – he reveals that he is half Chinese and half Scottish. He tells her that luckily his “Scottish half is below the waist.” Awkward … Jojo giggles nervously. Jon heads inside in his kilt – and the guys have a field day making fun of him.

A man arrives in a full Santa Claus costume, he introduces himself as “Saint Nick” and he even gives Jojo a present. He say s”Jo Jo jo” instead of “Ho Ho Ho.”

Chase, a medical sales rep from Colorado arrives with a horrible fake mustache on. He tells Jojo he “mustache her a question, but he is going to SHAVE it for later.” Seriously, we couldn’t make this stuff up if we tried …

Jake, an architect, arrives next – he’s not wearing a cheesy costume, and Jojo looks a little relieved.

The next guy doesn’t tell jojo his name, but he does give her two blue stress balls and tells her that she can squeeze his balls any time throughout the night if she is feeling stressed.

Meanwhile inside, the mansion is starting to get a little crowded – and some of the guys are not impressed with all of the corny gimmicks and costumes. Peter gave Jojo a huge stuffed heart and says that he wants to be her “man crush Monday.” Meanwhile, a hipster named Brandon confesses that he has never even watched the show and has no idea who she is.

Wells, a DJ, hops out of the limo..with four more guys with him. Wells introduces the a capella group and has them sing “I Swear” to her. JOjo is wowed and squeals about how amazing they are – meanwhile inside, the other guys are lined up at the windows and feeling a bit threatened.

But, Wells can’t really compete with Luke (a war veteran from Texas). He arrives on a white stallion – with a horn stuck to his head, like a unicorn. Jojo is thrilled because she loves unicorns, and Luke is from Texas just like her.

Now that all of the guys have arrived, Jojo heads inside to have some drinks with them and get to know them. She gives them a speech and tells them that this is going to be “one hell of a ride,” she wants them to all enjoy themselves. Jojo giggles about all of the hotness in the room.

Alex is the first guy to grab Jojo for some one on one time. They sit down outside and chat about him being in the Marines, the other guys make fun of him as he gets down on the floor and does push-ups, he has Jojo sit on his back.

Derek is still a nervous wreck, during his alone time with Jojo he confesses that he is a bit of anerd and he used to look like Harry Potter. He promises to show her some pictures later. Inside the other guys keep drinking and talking about how amazing Jojo is.

Jojo is getting frustrated because the guys are so tense, and she hasn’t felt the instant connection with anyone lie she felt with Ben. Finally she sits down with Jordan Rodgers, they have a long talk, and sparks are flying. Jordan is certain they have a connection – but he’s upset because he missed out on an opportunity to kiss her when they were done talking.

As the night progress, Jojo gets her groove, and she is starting to connect with quite a few of the guys. Will cons Jojo in to kissing him, and it’s super awkward. She pecks him on the lips really fast and sends him on his way.

Jordan grabs Jojo again and they slip outside together. He convinces her to slow dance with him and makes a move on her and kisses her. Jojo obviously enjoys it a lot more than her weird kiss with Will.

The drinks are flowing, and some of the guys obviously can’t handle their liquor like the other guys. Daniel is getting wasted….rapidly. He creeps out one of the guys and pokes him in the belly button. Daniel decides to get naked – because anyone can look good in a suit, but he wants to show Jojo what he is working with. Daniel strips down to his “man underwear” and jumps in the pool. Meanwhile, Nick S. is equally drunk and he interrupts Jojo’s interview in the diary room. Vinny is a mess too and kicks Nick out of the interview so he can talk to Jojo.

The guys line up for the rose ceremony, Jordan is obviously safe because he received the first impression rose. As Jojo is about to start passing out the roses, former Bachelor Jake Pavelka arrives and crashes the party. He tells Jojo that he needs to talk to her outside. Apparently Jojo and Jake have known each other for years and he is “like a brother to her.” Jake didn’t come to join the show, he tells Jojo that he just wanted to stop by and give her some advice, because he wants her “to find love.” He tells her to “go with her gut” and sends her back inside to start passing out the roses.

Jojo heads back to the rose ceremony and passes out roses to: Luke, Chase, Wells, James T, Grant, Derek, Christian, Chad, Alex, Robby, Brandon, James F, Ali, Nick (Santa Claus), Will, James S, Vinny, Evan, and Daniel. So, Jojo has eliminated 7 guys. They say their goodbyes to the other guys and wish Jojo good luck finding a husband. After the eliminated guys leave – Jojo and the remaining 19 guys celebrate and toast to the upcoming season.