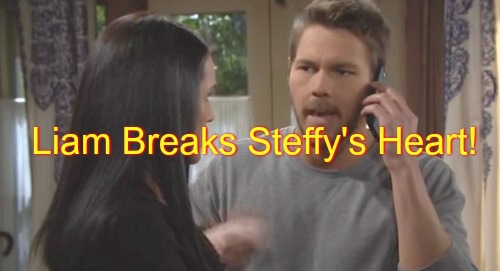 “The Bold and the Beautiful” spoilers for Wednesday, February 10, tease that Quinn (Rena Sofer) will devise a plan to help Steffy (Jacqueline MacInnes Wood) let Liam (Scott Clifton) go. Steffy isn’t satisfied with the texts that Quinn has been sending from Liam’s phone. None of this makes sense and Steffy just wants to hear Liam’s voice.

Quinn will decide that can be arranged without putting her plot in jeopardy. “The Bold and the Beautiful” spoilers say Quinn will concoct a story that will convince Liam to do what she wants. Perhaps Quinn will tell Liam that Steffy is an ex or stalker that’s trying to interfere in their marriage. Quinn might even just say it’s a telemarketer.

It doesn’t really matter what excuse Quinn comes up with as long as Liam does what he’s told. Wednesday’s B&B preview video shows a confused Steffy saying that she doesn’t understand. She’ll ask where Liam is. At Quinn’s urging, Liam will have harsh words for the person on the other end of the phone line.

Steffy will be stunned when Liam tells her to stop calling and get a life. Once the deed is done, Steffy will seek comfort from Wyatt (Darin Brooks). “The Bold and the Beautiful” spoilers reveal that Wyatt will point out how free Liam is probably feeling right about now. He’ll likely want Steffy to start feeling the same way.

Now that Steffy has no more doubts, she can truly move forward. Since Quinn is pushing them to elope, this could be a dangerous situation. Even if they don’t actually tie the knot, Wyatt and Steffy may end up heading to the bedroom. This time they wouldn’t just be cuddling under the covers.

Meanwhile, Caroline (Linsey Godfrey) will have a chat with Thomas (Pierson Fode). They’ll discuss how Thomas feels about Wyatt and Liam before the conversation takes an emotional turn. Thomas will admit that he still regrets what happened that night with Caroline. He’ll tearfully apologize for the confusion as well as his behavior around other women.

Thomas will insist that he’s going to be a better person from now on. Caroline won’t want to talk about any of this at first, but there’s a good chance she’ll be moved by Thomas’ speech. However, it looks like their tender moment will soon come to a screeching halt thanks to a medical emergency. Stick with the CBS soap for updates on Caroline’s trip to the ER.

So B&B fans, what do you think about the news that Quinn will use some trickery to give Steffy some closure? Will Steffy sleep with and maybe even elope with Wyatt? Will Caroline be happy that Thomas is changing his ways? Voice your opinion in the comments below and don’t forget to check CDL often for the latest “Bold and the Beautiful” spoilers, updates and news.

The Bold and the Beautiful (B&B) Video for Wednesday, February 10 2016