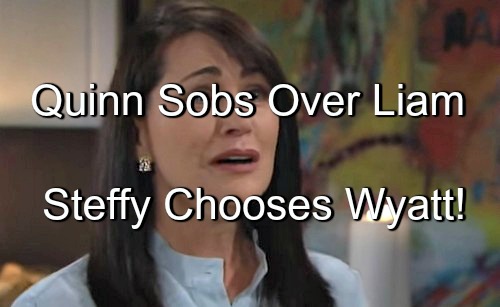 “The Bold and the Beautiful” spoilers for tomorrow’s epsiode, Thursday, April 28, tease that Quinn (Rena Sofer) will grovel before Liam (Scott Clifton) and hope that he’ll begin to understand. She’ll insist that it kills her to see Liam hurting like this. Quinn never set out to destroy Liam’s life.

He was simply a victim of her plot to bring Wyatt (Darin Brooks) and Steffy (Jacqueline MacInnes Wood) together.

However, Quinn’s plan resulted in some unanticipated consequences. She fell for “Adam” and now she can’t let go. “The Bold and the Beautiful” spoilers reveal that Quinn will sob as she says she’s never felt this way about anybody. She’ll let Liam know that she truly cares about him.

The Bold and the Beautiful spoilers say Liam will contend that this isn’t how you treat people you care about. He’s a person, not a possession. Quinn had no right to keep Liam isolated for months. Her lies have cost Liam so much. It sounds like Quinn will have even more tears rolling down before this confrontation is over.

Meanwhile, Wyatt will start to feel a twinge of guilt over what Liam is going through. B&B spoilers say Bill (Don Diamont) will claim Quinn is the one who should feel guilty. She has her own brand of crazy. Still, Wyatt will suggest that he hates how his actions contributed to Liam’s pain.

Of course, Wyatt doesn’t feel bad enough to step aside for Liam. He’s thrilled to be married to Steffy and he doesn’t intend on letting her slip away. Bill will agree that Wyatt needs to focus on his new wife. Wyatt will have to give Steffy his undivided attention if he hopes to keep her in his corner.

Even though Steffy appears to be choosing Wyatt for now, things could change down the road. You can bet that there’ll be some temptation. As long as Steffy continues to have deep feelings for Liam, her marriage with Wyatt will never really be secure.

Stick with “The Bold and the Beautiful” for updates on Steffy’s growing doubts.

So B&B fans, what do you think about the news that Quinn will beg Liam to understand? Is Quinn trying to win back her love? Should Wyatt feel guilty for pushing Steffy to move on? Will Wyatt pay the price for that later?