The Bold and the Beautiful (B&B) Spoilers: Should Douglas Be Raised by Ridge or Thomas – Vote for the Best Father in Our Poll!

BY Heather Hughes on May 17, 2016 | Comments: 4 comments
Related : Gossip, Poll, Soap Opera, Spoiler, Television, The Bold and the Beautiful 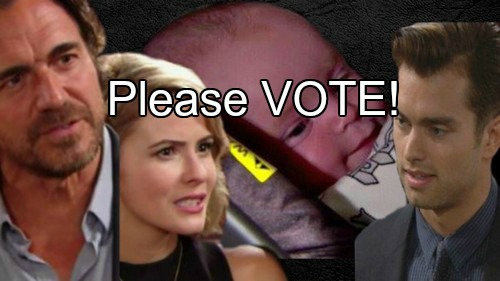 “The Bold and the Beautiful” spoilers tease that Ridge (Thorsten Kaye) and Caroline (Linsey Godfrey) may not be able to keep a lid on their secret for much longer. Thomas (Pierson Fode) has agreed to keep quiet, but that doesn’t mean things will go according to plan. Since Thomas is upset about letting Ridge raise Douglas, there’s still a chance he could back out of this agreement at some point.

Plus, Katie (Heather Tom) is in the loop and who knows what could happen if she goes on another drinking binge? Rick (Jacob Young) is determined to dig around, too. If Rick gets updates on the big news, he probably won’t hesitate to use it to his advantage. Soon, the whole world may learn that Ridge has secretly been raising his grandson.

Of course, that would create new questions about what’s best for Douglas. Caroline hoped to avoid the scandal by convincing Thomas to keep quiet. However, Ridge and Caroline obviously can’t keep this info from getting out. Once everyone knows the truth anyway, there’s really no reason why Thomas can’t claim his boy as his own. That’s something Thomas is definitely interested in doing.

Ridge has more experience as a father, but he’s not going to win any awards for being an outstanding dad. The fact that he was willing to lie to Thomas about his son proves that. This situation might’ve turned out differently if Ridge and Caroline had just been honest with Thomas from the beginning.

On the other hand, Thomas doesn’t have a great track record when it comes to making decisions. He was a ladies’ man for a long time and he did try to kidnap Thomas briefly. Thomas is impulsive and knows nothing about raising a kid, but he’s truly tried to settle down lately. “The Bold and the Beautiful” fans have certainly seen major shifts in this character’s personality.

When Douglas came along, it was like a switch flipped inside Thomas. He suddenly started thinking about having a family and now Ridge is robbing him of his firstborn son. Many new fathers aren’t ready for parenthood, but that doesn’t mean they can’t do a decent job. Thomas could surely figure it out. In a perfect world, Ridge would offer guidance. Instead, Ridge just wants to take over entirely.

After everything is out in the open, will that change Thomas’ mind about remaining in a brotherly role? We’ll have to wait and see, but it’s clear that B&B viewers are divided on who should serve as this child’s father. Which side are you on? Should Douglas be raised by Ridge or Thomas?

Vote in our “Bold and the Beautiful” poll and stay tuned to see where this storyline is headed.

So B&B fans, what do you think about the imminent scandal? Will Thomas fight Ridge for custody of Douglas? Which Forrester would be a more suitable dad? Voice your opinion in the comments below and don’t forget to check CDL often for the latest “Bold and the Beautiful” spoilers, updates and news.