BY Heather Hughes on May 28, 2016 | Comments: 5 comments
Related : Soap Opera, Spoiler, Television, The Bold and the Beautiful 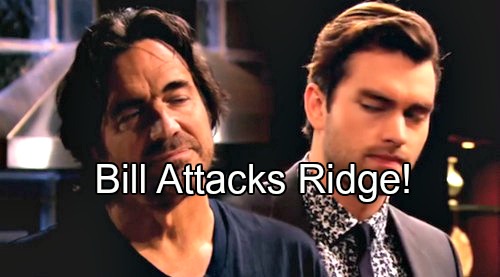 “The Bold and the Beautiful” (B&B) spoilers tease that on next week’s episodes an unexpected threat is emerging for Ridge (Thorsten Kaye). When Katie (Heather Tom) learned Thomas (Pierson Fode) was Douglas’ father, it threw off Ridge and Caroline’s (Linsey Godfrey) plan. However, Thomas ultimately chose to stay quiet for Douglas’ sake.

He didn’t want a big scandal to follow Douglas for the rest of his life.

Of course, we all knew that Rick (Jacob Young) was fishing around. Many B&B viewers figured Rick might be the one to blow this secret wide open, but the list of possibilities is growing. Someone else will soon have the desire to bring down Ridge. Who is it, you ask? It’s none other than “Dollar Bill” Spencer (Don Diamont)!

The Bold and the Beautiful spoilers say it seems Bill is beginning to crave more power. He’ll decide that he’d like to take over Forrester Creations. That’s quite a goal. Bill can’t pull this off unless he finds a massive bombshell. Fortunately, Ridge has a major secret that’s just waiting to get out.

“The Bold and the Beautiful” spoilers say Bill will urge Justin (Aaron D. Spears) to get some dirt on Ridge. You can guess what they’ll dig up. Bill will discover that Ridge has been passing off his grandson as his own child. He’ll realize that he’s sitting on a goldmine. This news is huge!

When Katie gets updates on Bill’s intentions, she’ll demand his silence. Katie was adamant that Thomas should know the truth about his son and she made sure he was told. After that, Katie’s work was done. Thomas agreed that he would only serve as Douglas’ brother. That was Thomas’ choice and this is a family matter. Katie won’t think it’s Bill’s place to expose it to the world.

Nevertheless, Bill can’t just forget what he knows. He’ll promise to keep his mouth shut, but can Bill really do that? If Ridge starts pushing Bill’s buttons, things could get ugly. You can bet that a blackmail plot is brewing. Stick with “The Bold and the Beautiful” to see how long Bill can hold out.

So B&B fans, what do you think about Bill’s quest for power? Will he follow through on his plan to take over Forrester? How will Bill react to Ridge’s secret? Will Bill honor Katie’s wishes or eventually go rogue?