The Bold and the Beautiful (B&B) Spoilers: Bitter Custody Battle Over Douglas – Thomas Wants Son, Ridge Puts Up a Fight

BY Heather Hughes on March 30, 2016 | Comments: one comment
Related : Soap Opera, Spoiler, Television, The Bold and the Beautiful 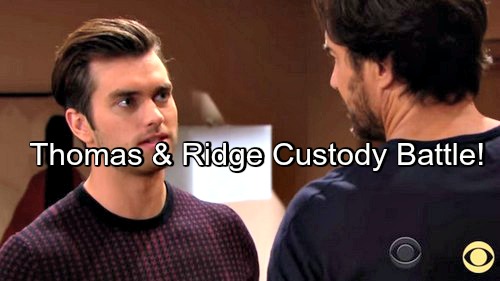 “The Bold and the Beautiful” (B&B) spoilers tease that a storyline involving an attorney is in the works. According to Soap Opera Digest, B&B is looking for a male to play a thirtysomething lawyer named Ed De La Rosa. Ed is said to be confident and polished, so it sounds like he’ll be showing off some serious skills during this two-episode stint.

Now that we know an attorney will be around for a couple of days, B&B spoilers are speculating on the reason he might be needed. Since Ridge (Thorsten Kaye) and Caroline’s (Linsey Godfrey) baby secret is about to blow, this lawyer could be involved in that saga. There are definitely some interesting possibilities here.

Let’s say that Thomas (Pierson Fode) finds out the truth, but Ridge refuses to give him contact with the child. “The Bold and the Beautiful” viewers have been watching Thomas bond with Douglas since his birth. Thomas feels a strong connection to his little brother. It’s sure to become even stronger when Thomas realizes Douglas is actually his son.

Of course, Ridge is stubborn and controlling. He’s determined to raise Douglas as his own and it doesn’t seem to matter if that affects anyone else. Besides, Ridge feels like Thomas is too immature to raise a child – or at least that’s how he’s been justifying his secretive behavior.

If Thomas decides he wants to play an active role in Douglas’ life, you can bet that Ridge will put up a fight. A bitter custody battle may ensue. Perhaps this attorney could be hired by Thomas. He might persuade a judge to hand over the baby.

“The Bold and the Beautiful” spoilers suggest that the war between Thomas and Ridge will erupt on new episodes over the next few weeks. Caroline has been warming up to Thomas lately and she’ll undoubtedly find herself torn in the midst of the drama.

Once the truth is out, Caroline may see no point in keeping Thomas from Douglas. Conversely, Ridge will likely want Thomas to stay as far away as possible.

Could this turmoil tear Ridge and Caroline’s relationship apart? Since Ridge is probably going to be a big baby about all of this, Thomas may end up looking like the more responsible parent. Caroline might feel drawn to her ex and the true father of her son.

Would that leave Ridge out in the cold? Stick with the CBS soap for updates on these dueling daddies.

So B&B fans, what do you think about the news that an attorney will be part of an upcoming storyline? Will Thomas fight Ridge for custody of Douglas? Will Caroline turn away from Ridge if he plays dirty?