The Bold and the Beautiful (B&B) Spoilers: Deacon Returns From The Dead – Gunning for Quinn and Liam 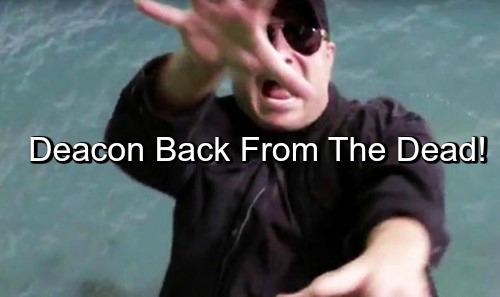 “The Bold and The Beautiful” (B&B) spoilers reveal that Deacon Sharpe (Sean Kanan) likely did not die when Quinn Fuller (Rena Sofer) shoved him off the cliff. It’s kind of amazing really that he didn’t end up splattered on the rocks below, considering how far out the outcropping stuck.

However, we know on soaps – no body, no death… And since Ridge Forrester (Thorsten Kaye) survived a similar fall, albeit from a helicopter, there’s a history of returns from what looks like a watery grave. Suffice it to say, The Bold and the Beautiful spoilers say we should see Deacon back from the dead in an upcoming episode soon.

And when Deacon rises like an angry monster from the sea, you know he’ll be gunning for Quinn. The question is, how will he go about making her pay for trying to kill him? What Deacon has on his side is the element of surprise since Quinn assumes he’s dead.

B&B spoilers tease that Deacon could always go the direct route and come dripping wet straight from the ocean, pounding on her cabin door and strangling her with his bare hands. That would probably be very satisfying for Deacon, but it would not punish Quinn enough.

The big issue is that Quinn promised Deacon they’d have a new start after she got rid of Liam Spencer (Scott Clifton) but judging by the extremes Quinn went to – luring him to the cliff and shoving him over – Deacon now knows that Quinn has fallen really hard for Liam.

So while choking Quinn might be satisfying for a moment, B&B spoilers hint that taking Liam from her would be a more lingering torment. Deacon could do this in a number of ways. He could call Bill Spencer (Don Diamont) and tell him he can find Liam at Quinn’s cabin.

But Deacon may not want to reveal himself in this way since Quinn could implicate him in the kidnapping since he’s been at the cabin, saw Liam, and didn’t report it. Plus, Liam saw Deacon and knows him as their friend “Jim.”

If Deacon is clever – and we know that he is – he will take one of two approaches. One, he can call someone anonymously – like the cops or, even better, Steffy Forrester (Jacqueline MacInnes Wood) and tell them Liam is being held in a cabin in the mountains.

Second, Deacon could wait until Quinn is gone and go to Liam and tell him the truth of who he is. Deacon can bring enough evidence of Liam’s real name and identity so that “Adam” will know that Quinn has been lying to him.

Deacon could even hand over the original photos that were used in the scrapbook so Liam could see himself with Steffy. That might trigger some memories. The doc Deacon and Quinn saw told them Liam’s memories may never come back.

But we know they will… B&B spoilers tease that Steffy and Wyatt Spencer’s (Darin Brooks) Malibu beach wedding will be interrupted by Liam. Since Quinn has to be at the wedding because it’s her son getting hitched, this is a perfect opportunity for Deacon.

Deacon can wait until she leaves for her son’s big day, fill Liam in on everything she’s done and make some excuse about how Quinn blackmailed him into silence, then drive Liam to the wedding and dump him out to cause a scene.

Even if Liam doesn’t recall his memories after a talk with Deacon, just him showing up to the wedding will throw it into chaos. And, of course, Adam will be shocked to see Eve there. That’s the way to add fireworks to the wedding!

Of course, we don’t know yet what Deacon’s plans are but we’ve got fingers crossed that he’s the one who gets Liam to the church on time (so to speak), wrecks the wedding and publicly humiliates Quinn. That might begin to make up for what Quinn did to Deacon.

What do you think B&B fans, what are your hopes for Deacon’s revenge plan against Quinn? Do you think he’ll go after Quinn directly or instead target Liam to break her heart? Share your comments below and come back to CDL for more “The Bold and The Beautiful” spoilers and news.