The Bold and the Beautiful (B&B) Spoilers: Evil Quinn Is Back, Anger Grows – Wants Liam Dead 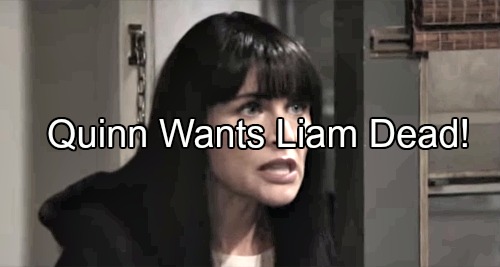 “The Bold and the Beautiful” (B&B) spoilers for Wednesday’s episode, June 8, tease that Quinn (Rena Sofer) will make a vow to protect her son’s future. She’ll insist that she won’t let Liam (Scott Clifton) interfere in Steffy’s (Jacqueline MacInnes Wood) relationship with Wyatt (Darin Brooks). It seems Quinn has lost that loving feeling.

Since Liam couldn’t get on board with Quinn’s reunion plans, she really has no use for him.

Quinn will believe that Liam needs to be taken out of the picture. She’ll bark that as long as Liam lives and breathes, he’s a threat to Wyatt’s marriage. It’s clear that Quinn has taken a dark turn once again. Many viewers thought Quinn was trying to change, but it was evidently a false alarm.

Now that Quinn is letting go of “Adam” and what happened at the cabin, she’s reverting to her wicked ways.

Meanwhile, Steffy and Wyatt will get into a huge argument over Quinn. She’s becoming a major issue for this couple. “The Bold and the Beautiful” spoilers suggest that Steffy will want Quinn to stay as far away from them as possible. However, Wyatt will contend that Quinn is still his mother.

She’s done some horrible things, but Wyatt won’t want to cut her out of his life entirely.

Wyatt thinks Quinn simply needs guidance to get her life back on track. Unfortunately, Quinn probably needs more help than Wyatt realizes. Speaking of help, Ridge (Thorsten Kaye) and Caroline (Linsey Godfrey) may need a whole lot of it. Bill (Don Diamont) just informed Ridge that the jig was up.

He knows the truth about Douglas’ paternity and he’s ready to spill it.

B&B spoilers say Ridge will make a tough decision that involves handing over some of his power. He’ll be willing to do whatever it takes to keep his secret safe. Of course, this secret is far from secure now. Katie (Heather Tom), Thomas (Pierson Fode), Bill and Brooke (Katherine Kelly Lang) have all been clued in.

Someone else will surely find out about this secret soon. Rick (Jacob Young) should start eavesdropping a bit more often. Then again, he may not have to with all of these loose lips. Nobody can stay quiet for very long on a soap. Stick with “The Bold and the Beautiful” for updates on Ridge’s crumbling empire.

So B&B fans, what do you think about the news that Quinn’s anger toward Liam will grow? Are you surprised that evil Quinn is back already? Will she continue to come between Wyatt and Steffy? Will Bill and Ridge reach a mutually beneficial agreement?