The Bold and the Beautiful (B&B) Spoilers: Handcuffed Quinn’s Tearful Plea for Forgiveness and Freedom – Nicole in Labor

BY Heather Hughes on May 13, 2016 | Comments: 3 comments
Related : Soap Opera, Spoiler, Television, The Bold and the Beautiful 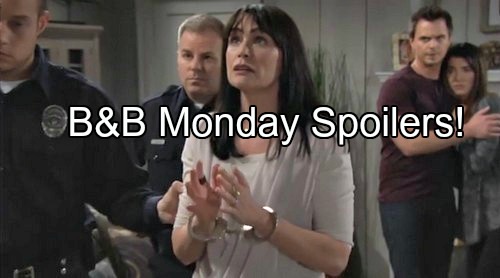 “The Bold and the Beautiful” spoilers for next week’s episode on Monday, May 16, tease that Quinn (Rena Sofer) will make a frantic, tearful plea. Quinn knows that her only hope is to get Liam’s (Scott Clifton) forgiveness. She’s already been placed in handcuffs, but Liam will agree to hear her out before she’s taken to jail.

Quinn will beg Liam to understand her thought process. “The Bold and the Beautiful” spoilers say Quinn will admit there were so many things she should’ve done. However, Quinn will insist that she didn’t think it was right to put Liam back in Steffy’s (Jacqueline MacInnes Wood) orbit.

Liam and Steffy obviously feel like the situation would’ve been totally different if Quinn hadn’t intervened and kept addled Liam prisoner. Quinn actually feels the same way and she claims that’s why she had to keep the pair apart.

According to Quinn, Wyatt (Darin Brooks) is a much better match and this was all about helping Steffy see the light.

Of course, Quinn also discovered that Liam is her soul mate in the midst of all this. She’s desperate for Liam’s mercy, but is that something he’s willing to offer? We’ll have to wait and see, but it’s clear that Quinn’s passionate speech will stir up strong emotions for everyone.

Liam may decide that he’s been through too much to truly give Quinn a pass. After Quinn’s spectacle, Liam will have a private conversation with Wyatt and Steffy. He’ll point out that Quinn is family for them, so he knows this must be tough.

Liam will suggest that they can forgive her if they want. It seems Liam is just tired of the drama.

Later, B&B spoilers say that Steffy will confess that she’s never seen Quinn like that. Maybe Steffy could reconsider the idea of serving as an ally for her mother-in-law. Stay tuned to see what’s next for Quinn and her twisted love life.

Meanwhile, Caroline (Linsey Godfrey) will pass along some exciting news to Sasha (Felisha Cooper). B&B spoilers say Caroline will announce that Nicole (Reign Edwards) is in labor. It sounds like Rick (Jacob Young) and Maya’s (Karla Mosley) bundle of joy will be here before you know it.

Stick with “The Bold and the Beautiful” for updates on the big event.

So B&B fans, what do you think about Quinn’s last plea for forgiveness and freedom? Will Liam try to understand or reject Quinn once again? Are you glad Nicole is finally giving birth?