‘The Bold and the Beautiful’ Spoilers: Ivy Returns Late August – Which Heartbroken Spencer Brother Will She Comfort? 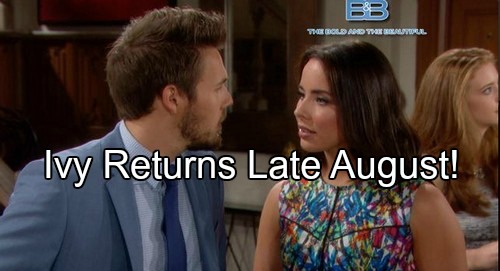 The Bold and the Beautiful (B&B) spoilers tease that some big news was just confirmed. According to the Bold Insider Twitter account, Ivy (Ashleigh Brewer) is indeed returning to the CBS soap. We recently reported on some hints Katherine Kelly Lang (Brooke) dropped about Ivy’s comeback. Now we have confirmation along with a timeframe for Ivy’s next airdate.

Bold Insider’s tweet stated that we can expect Ivy on our screens in late August. That’s not too far away! We can’t help but wonder what’s going to bring Ivy home.

First of all, Forrester Creations probably needs some help with their jewelry lines. Quinn (Rena Sofer) lost her job and it doesn’t seem like she’ll be getting it back anytime soon. Meanwhile, Wyatt (Darin Brooks) has been serving as Bill’s (Don Diamont) pet over at Spencer Publications.

Ivy’s services are definitely needed. She should resume work at FC and help them boost their business with some new collections. Of course, B&B viewers really want to know what Ivy’s love life will look like.

Unless a new character pops up who’s the perfect fit, Ivy’s only options may be Wyatt or Liam (Scott Clifton). The Spencer brothers are both focused on Steffy (Jacqueline MacInnes Wood) at the moment, but this battle appears to be winding down. Since Steffy is realizing that Quinn is inescapable, Wyatt will fear that his marriage could be in trouble.

We can’t forget that Wyatt was ready to start a life with Ivy before Quinn halted the proposal. She forced Ivy to reveal her feelings for Liam. Wyatt was bummed, but he apparently wasn’t overly crushed. It wasn’t long until he began chasing after Steffy. Wyatt obviously has some issues when it comes to rushing into marriage.

Nevertheless, Wyatt did seem to have genuine feelings for Ivy at one time. If things fizzle with Steffy, Wyatt could seek comfort from his ex. On the other hand, Ivy might get one more chance to win Liam over if Steffy decides to stick with Wyatt.

After everything that’s happened with Quinn, choosing to stay married would say a lot about Steffy’s feelings for Wyatt. Liam might finally give up and move on. That’s where Ivy could enter as the rebound.
Naturally, Steffy would immediately become interested in Liam again.

The Bold and the Beautiful fans know that Steffy typically wants Liam when she knows he’s unavailable. If Steffy sees Ivy cozying up to Liam, it would certainly get under her skin.

Steffy might win Liam back, which means all of this could just be another route to a Wyatt and Ivy reunion. Perhaps they’ll realize that they’ve been pining for people who will never fully reciprocate their feelings. Even though Wyatt is married to Steffy, he doesn’t really have her whole heart.

Likewise, Ivy never truly had Liam’s heart either. Love has always been about an endless rotation of Steffy and Hope for him. Speaking of Hope, we can’t forget about that possibly disguised recast from a few months ago. If Hope returns, we could have a real mess on our hands.