BY Heather Hughes on May 4, 2016 | Comments: 4 comments
Related : Soap Opera, Spoiler, Television, The Bold and the Beautiful 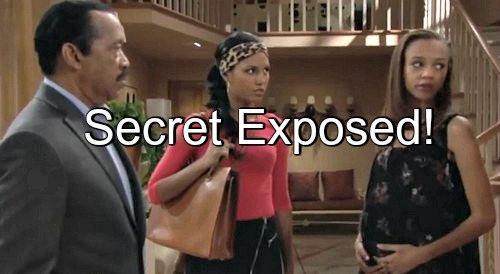 “The Bold and the Beautiful” (B&B) spoilers for Wednesday’s epsiode, May 4, tease that Julius (Obba Babatunde) will insist it’s time for Sasha (Felisha Cooper) to head home. He’ll coldly declare that Sasha is going to pack her things and leave for Illinois today. Sasha will counter that she should be ashamed to admit that Julius is her father.

He treats Sasha like dirt when all she’s ever wanted was love.

Nevertheless, Sasha can’t help but long for that connection with her dad. She’ll confess that she still cares about Julius and she doesn’t feel the same sense of shame he does. Julius will maintain that Sasha has no place in Los Angeles, but he’ll hope that they can reach some sort of agreement.

As Sasha prepares to go, Nicole (Reign Edwards) will stop her sister. The Bold and the Beautiful spoilers say that she’ll inform Vivienne (Anna Maria Horsford) that Julius has something to tell her. If Julius doesn’t come clean about his secret daughter, then Nicole could easily blurt out the truth.

Of course, Vivienne knows the kind of man she married. She probably won’t be too surprised by the news that Julius has been keeping this under wraps. She may already have suspicions about Sasha’s paternity.

Don’t let that pleasant exterior fool you. Mrs. Avant is one tough cookie. Even if this is a crushing blow, Vivienne wouldn’t expect anything different from her sleazy husband. There’s a good chance Vivienne will manage to rise above any challenges this revelation brings. 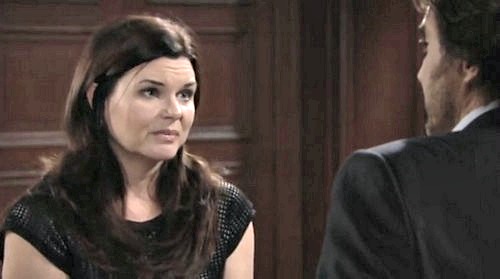 Katie will ask Ridge if he killed Dr. Wolin. It looks like Katie suspects Ridge bribed someone to get rid of the threat. Ridge will deny it and toss out a lie to cover up his real secret. He’ll claim a sperm donor was used to impregnate Caroline (Linsey Godfrey).

Unfortunately, Katie will be far from satisfied. She’ll start badgering Caroline next. It appears Caroline may not be able to stay cool under pressure. That could lead to even more questions and a stunning decision next week. Stick with “The Bold and the Beautiful” for updates on Caroline’s futile fight to hide the truth.

So B&B fans, what do you think about the news that Nicole will push Julius to confess to Vivienne? Will Julius ever find a way to get along with this whole family? Will Katie keep digging until she uncovers what Ridge has buried?