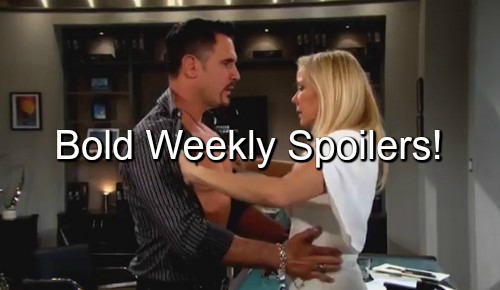 “The Bold and The Beautiful” (B&B) spoilers for the week of Monday February 22 to Friday February 26 reveal that the Forresters and Logans are in-fighting and these bitter family battles will rage on all week while a dodgy new romance deepens but is at risk. Here’s what to expect next week.

Rick Forrester (Jacob Young) will not let go of the portrait issue. He drags Maya Avant’s (Karla Mosley) framed monstrosity back out and demands that it be restored to its rightful place above the mantle in place of Stephanie’s painting.

Ridge Forrester (Thorsten Kaye) isn’t having it and Eric Forrester (John McCook) takes Ridge’s side. Rick threatens to move out unless it’s restored. Ridge doesn’t care – he’s also planning renovations to the house to make room for him, Caroline Spencer (Linsey Godfrey) and the baby.

Rick hates that Ridge is moving to take over the family home and tells Maya to pack up and they’re out of there. Maya tries to calm Rick down but he’s furious. Will they move to his mom’s place – or will Maya talk Rick into staying around and fighting for dominance?

Caroline breaks the big news to Ridge that they’re having a boy. He’s very excited but Caroline feels guilty about hiding the paternity from Thomas Forrester (Pierson Fode) who just told her that he would love to have a child – the opposite of how Ridge assessed his son.

The Logans are still at war as well. Katie Logan (Heather Tom) rages at her sister and says she knows she’s trying to steal her family – it’s the same song we’ve been hearing for two weeks… But Bill Spencer (Don Diamont) wants to address Katie’s anger, depression and boozing.

Bill sees this as a replay of what tore their marriage apart before. He wants her to get help. Katie insists that Brooke is the only problem in their lives. Looks like Katie may be handing Bill to Brooke on a silver platter if she keeps up her crazy behavior and alcoholism.

Steffy Forrester (Jacqueline MacInnes Wood) comes to see her dad Ridge and fills him on the drastic changes in her love life. She tells him she’s with Wyatt Spencer (Darin Brooks) now but still has some feelings for Liam Spencer (Scott Clifton) that need closure.

Zende Forrester (Rome Flynn) sets up romantic date for Nicole Avant (Reign Edwards) but she’s hesitant. Brooke makes an offer to Zende to help – perhaps the use of her home? But this ends up bringing up his issues with Nicole’s pregnancy and they find themselves at a crossroads.

Looks like Nicole and Zende either need to make love or make a decision that their relationship is over. Meanwhile, Sasha Avant (Felisha Cooper) is waiting in the wings, ready to swoop in and steal Zende. Julius Avant (Obba Babatunde) against tries to get her to leave town, but Sasha won’t.

Don’t miss any of the action happening the week of February 22 thru February 26 – and be sure to check back with CDL every day for detailed “The Bold and The Beautiful” spoilers plus news and more.