BY Heather Hughes on May 24, 2016 | Comments: 4 comments
Related : Soap Opera, Spoiler, Television, The Bold and the Beautiful 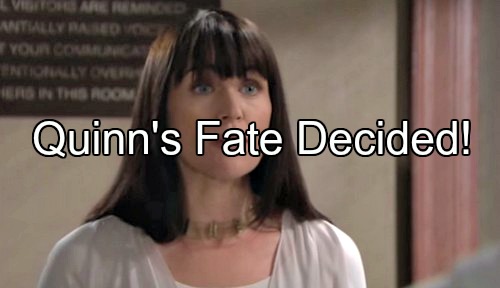 “The Bold and the Beautiful” (B&B) spoilers for Tuesday, May 24, tease that Wyatt (Darin Brooks) will try to convince Liam (Scott Clifton) to go easy on Quinn (Rena Sofer). Wyatt will feel like Quinn will never truly overcome her mental issues if she ends up in prison. He’ll suggest that psychiatric treatment would be a more appropriate course of action.

Liam will be stunned that Wyatt is asking him to give Quinn a pass after everything she did to him. Wyatt will understand why Liam is angry, but he’ll urge Liam to have compassion. “The Bold and the Beautiful” spoilers say Wyatt will think Liam should show some generosity to Quinn.

Later, Quinn will have the chance to plead her case as well. B&B spoilers reveal that Quinn will insist she was her best self when she was with Liam. She’ll want the opportunity to prove that she can be that woman again. Liam will shout that Quinn is the same “conniving, scheming monster” in that cabin as she is in the real world.

It’s clear that Liam still resents Quinn for causing him to lose Steffy (Jacqueline MacInnes Wood). However, we all know how Liam loves to change his mind. Will Liam decide to let Quinn off the hook or will he simply tell Quinn to rot in a cell?

This is a serious situation that Liam won’t take lightly. He hates Quinn for her deception, but he can’t deny that part of him loved her at the cabin. Liam is feeling hurt, confused and betrayed. He can’t even wrap his head around all of his emotions. Is there anything Quinn can say to turn things around?

Once everything is out in the open, Liam will make his decision and Quinn will learn her fate. Regardless of what Liam chooses to do right now, there’s a possibility that Liam and Quinn will reconnect down the road. Since Steffy seems committed to Wyatt, Liam might feel drawn to someone who’s willing for fight for him.

Stick with “The Bold and the Beautiful” for updates on Quinn and Liam’s potential reunion.

So B&B fans, what do you think about the news that Wyatt will urge Liam to be compassionate? Will Liam make Quinn pay or have second thoughts? Will Quinn’s plea help or just enrage Liam even more? Does Liam still love Quinn deep down?