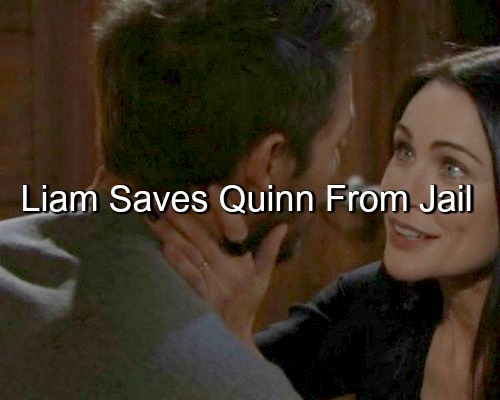 “The Bold and The Beautiful” (B&B) spoilers reveal that Quinn Fuller (Rena Sofer) may avoid facing any legal consequences for her kidnapping of Liam Spencer (Scott Clifton) – and it’s all because Liam finds himself still enthralled with his “Eve.”

Deacon Sharpe (Sean Kanan) will come back and try to talk sense to Quinn about letting Liam go free before she lands in hot water. Quinn will refuse to let Liam go or tell him the truth because she’s fallen hard for her son’s brother and wants to be with him.

Deacon can’t make her see the light and the scheme unravels very soon. This week, Wyatt Fuller (Darin Brooks) shows up to see his mom and she’ll be acting sketchy to keep him from finding Liam. But the jig will be up when Steffy Forrester (Jacqueline MacInnes Wood) calls.

Steffy calls Quinn’s phone this week and will be stunned that Liam answers. How can Quinn possibly explain that away? The bottom line is that all it will take for all this to come out is for Steffy and Wyatt to show up at the cabin and force their way past Quinn.

But no matter how Quinn’s antics are exposed, they will be and she could be facing arrest for her actions. No doubt Steffy will want to see Quinn behind bars – and so will Bill Spencer (Don Diamont) – for Quinn keeping Liam away from everyone and lying to him.

But will Quinn end up in a cell? Or a padded room? Or will Liam himself save her from that fate? There’s no doubt that when Liam finds out he’s been holed up in the cabin with Quinn and been sexing up his brother’s mother, he may be initially icked out.

But B&B spoilers reveal that Liam may not be able to shake the memory of the tender times he shared with Quinn – and he may refuse to press charges. As far as Liam can remember, Quinn was unfailingly kind and patient and took good care of him.

Plus, no doubt the sex was hot and Quinn is a desirable woman. Will Liam be unable to quit Quinn? Is she the woman he can’t leave even though he knows it’s an inappropriate relationship? Steffy will be furious to find out that Liam has been in Quinn’s bed.

But if Liam then refuses to let the law punish Quinn, Steffy may snap. Steffy may get Liam back in body, but not in mind if his thoughts linger on his time as Adam with his Eve. So for those who expect to see Liam lash out at Quinn over his kidnapping, think again.

When Liam is “rescued” from Quinn that may just the beginning of Quiniam – and far from the end. No doubt Steffy and Wyatt will be infuriated by the actions of his mother and brother – but you can’t stop love and it looks like both Liam and Quinn have fallen hard.

What do you think B&B fans – do you want to see Quinn punished for the kidnapping and lies to Liam? Do you think Liam will press charges or let his new love Quinn go free? Will Liam keep loving Quinn even after his memories return?