The Bold and the Beautiful (B&B) Spoilers: Liam Struggles with Aftermath of Quinn’s Plot – Surprise Pregnancy in The Mix? 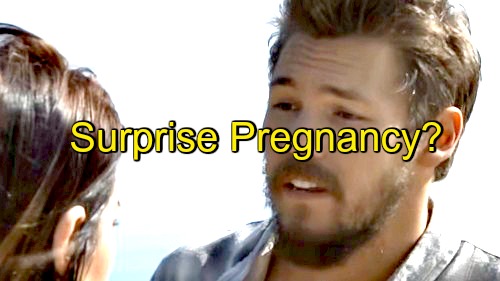 “The Bold and the Beautiful” spoilers reveal that Liam’s (Scott Clifton) world is turned upside down on this week’s episode. Thanks to Quinn (Rena Sofer), Liam has been cut off from his old life. Once the truth is revealed, Liam will have a lot to sort out.

B&B spoilers say Liam will struggle to wrap his head around everything he’s been through. In addition, Liam will have to come to grips with what happened in his absence.

Although Liam called off the engagement before he lost contact with Steffy (Jacqueline MacInnes Wood), he’ll undoubtedly be surprised by how quickly she married Wyatt (Darin Brooks).

We know that a series of misunderstandings set most of this in motion. Steffy thought Liam deliberately left her behind in favor of a trip to Australia. Liam returned to find Steffy cuddling with Wyatt in bed and got the wrong idea. Then, Quinn’s actions caused Steffy to believe Liam completely abandoned her.

Things are going to get even messier when Liam and Steffy come face to face once again. It’s anyone’s guess how that will go. Will they finally clear up some of the confusion? It seems likely, but shouldn’t bet on Steffy dropping Wyatt like a hot potato.

Steffy cares about Wyatt and she won’t want to hurt him, especially since they’ve just tied the knot. Plus, it looks like Wyatt will be the one to help Liam to break free of Quinn’s grasp. Since “The Bold and the Beautiful” is letting Wyatt play the hero, Liam might urge Steffy to stand by her new man.

Of course, Steffy will probably pine for Liam and there’s a good chance they’ll end up back together at some point. In the meantime, Ivy (Ashleigh Brewer) will reenter the picture. Could Liam turn to Ivy as a source of comfort? She’d gladly lend a shoulder to cry on.

We also have to consider the possibility that a surprise pregnancy could be in the works. It might be Steffy, Quinn or even both of these ladies. On the other hand, it’s been baby central on B&B lately. They may choose to skip it for this storyline. We don’t want kid overload here.

Whatever happens, you can bet that heartbreak is on the way for nearly all of these characters. It’s doubtful that anyone will have true happiness after Quinn’s plot is exposed. Stick with “The Bold and the Beautiful” for updates on the tears and confrontations to come.

So B&B fans, what do you think about the news that Liam will have difficulty coping? Will Liam and Steffy ever reconnect? Could Ivy win back Liam’s heart instead? Voice your opinion in the comments below and don’t forget to check CDL often for the latest “Bold and the Beautiful” spoilers, updates and news.