The Bold and the Beautiful (B&B) Spoilers: Nicole Attacks Dad for Sweeping Sister Under Rug – Sasha Spills Childhood to Zende

BY Monica DelRay on May 2, 2016 | Comments: 5 comments
Related : Soap Opera, Spoiler, Television, The Bold and the Beautiful 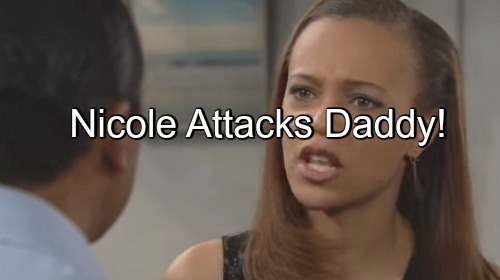 “The Bold and the Beautiful” (B&B) spoilers for tomorrow’s episode, Tuesday, May 3, tease that Julius (Obba Babatunde) will dismiss Nicole’s (Reign Edwards) accusations. Thanks to Sasha’s (Felisha Cooper) sudden confession, Nicole knows she has another sister.

She’ll demand an explanation from Julius, but he’ll be hesitant to open up.

Julius will declare that Sasha is a liar. He’ll remind Nicole that this is the same woman who stole her boyfriend. Julius will ask if Nicole is going to let Sasha take her father, too. However, Nicole will ignore Julius’ denial.

“The Bold and the Beautiful” spoilers reveal that Nicole will be furious about the treatment Sasha has received over the years.

Of course, Vivienne (Anna Maria Horsford) has also had to deal her fair share of problems. Julius certainly hasn’t made life easy for his wife. Nicole will be concerned about how Vivienne is going to take the news. She’ll feel like it could really push her mother over the edge.

This may be a major blow to Julius and Vivienne’s marriage. On the other hand, there’s a chance Vivienne already knows or at least suspects Sasha belongs to Julius. It’s hard to keep secrets like this buried for too long.

Maybe Vivienne has chosen to keep quiet about her suspicions because she knows how Julius can be. That might be why Vivienne has always seemed so kind and welcoming toward Sasha. Regardless, it’s going to change the game once everything is out in the open.

Meanwhile, B&B spoilers say Sasha will explain the whole story to Zende (Rome Flynn). She’ll divulge details about her difficult childhood and the continued challenges she faces with Julius. Zende will be surprised by Sasha’s updates, but he’ll try to be there for her in any way he can.

Sasha will worry that this could tear the family apart. If that happens, Sasha will feel responsible. Zende will assure Sasha that she’s not to blame for Julius’ mistakes. He’ll insist that things will work out in the end. Will the Avants manage to get through this crisis?

Stick with “The Bold and the Beautiful” to see if their drama will ever die down.

So B&B fans, what do you think about Julius and Nicole’s intense confrontation? Will Julius ever see the error of his ways? Does Vivienne already know the truth on some level? Will Zende help Sasha cope with the turmoil?