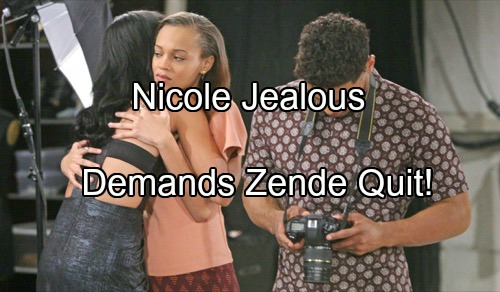 “The Bold and the Beautiful” (B&B) spoilers tease that a promotion is in Sasha’s (Felisha Cooper) future. Ridge (Thorsten Kaye) will decide that Sasha should be Forrester Creations’ lead print model. Sasha will be thrilled by the news, but Nicole (Reign Edwards) will have a much different reaction.

We’ve been down this road before. Nicole once tried to have Sasha fired so that she’d be out of Zende’s orbit. However, Nicole will try a different tactic this time around. Instead of trying to force Sasha out, Nicole will put pressure on Zende to quit.

Zende thinks he could have a successful career as a photographer. Of course, that can’t happen without practice. Zende will have some reservations about giving up this gig to appease Nicole. This could be Zende’s big break. “The Bold and the Beautiful” spoilers say Zende will be hesitant to ditch his dream.

Nicole will insist that she can’t trust Zende and Sasha to be around each other after everything that’s happened. Zende will likely assure Nicole that he got that out of his system. He was confused about his feelings when Nicole was pregnant, but now he’s certain she’s the one he wants to be with.

Sasha claims that’s she’s changed for the better, so Nicole is cautiously trying to give her an opportunity to prove herself. Nevertheless, this is a tricky situation and Nicole just doesn’t feel comfortable with it. If Zende won’t back down, there could be trouble. Nicole may believe Zende isn’t 100 percent committed to her.

As long as Zende and Sasha are working together, Nicole will have to wonder what’s going on between them. There’s even a chance that Nicole could be right. Maybe Sasha’s new attitude is all an act. Plus, it’s obvious that Zende doesn’t always make the best decisions.

He could easily be won over by Sasha again, especially if she shows him a softer side.

Nicole’s insecurity could cause more problems on B&B. Zende may feel like she’s constantly doubting his ability to stay faithful. If these two don’t have trust in their relationship, it could begin to crumble. Does Sasha still pose a threat? Stick with “The Bold and the Beautiful” for updates on the risks and snags ahead.

So B&B fans, what do you think about the news that Sasha will get a promotion? Will the extra workload with Zende drive Nicole crazy? If Zende won’t give up his job, what will Nicole do about it?