The Bold and the Beautiful (B&B) Spoilers: Nicole Explodes with Rage at Zende – Sasha Rubs Victory in Nicole’s Face 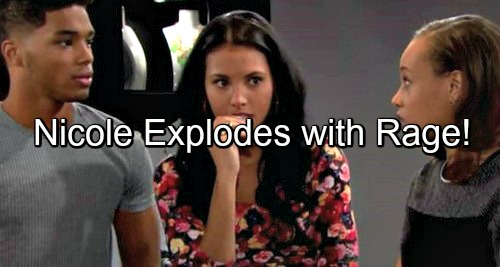 “The Bold and the Beautiful” (B&B) spoilers reveal that an explosive showdown is on the way on next week’s episodes for Nicole (Reign Edwards) and Sasha (Felisha Cooper). B&B viewers know that Zende (Rome Flynn) finally decided he just couldn’t handle the surrogacy anymore. He dumped Nicole and left her heartbroken.

Naturally, Sasha swooped in and marked her territory. She’s had her eye on Zende from the first moment she saw him.

The rivalry will heat up once again when Nicole gets updates on Zende’s latest girlfriend. “The Bold and the Beautiful” spoilers say Zende will give Nicole the news that he hooked up with Sasha. He’ll add that they’ve started dating. The double blow will send Nicole on the warpath.

Nicole knew that Zende would be moving on with someone new, but did it have to be her former bestie? That’s pretty low.

The Bold and the Beautiful spoilers know that Sasha’s primary goal in all of this was undoubtedly getting revenge. Nicole’s jealousy nearly cost Sasha her modeling job. Sasha saw what Nicole was capable of and she doesn’t intend to let her go unpunished. The fact that Zende is a nice piece of eye candy is simply a bonus.

B&B spoilers promise that Nicole will rip into her adversary for making her move, but Sasha will insist that she had every right to do so. All’s fair in love and war. Sasha doesn’t care if she’s a rebound, a seductress or anything else Nicole might want to call her.

She’ll think she won the prize. Of course, Sasha’s greatest victory will be rubbing it in Nicole’s face.

As for Zende, he’ll struggle with guilt once Nicole lashes out. Zende still cares about Nicole and he didn’t set out to intentionally hurt her. Nevertheless, B&B spoilers say that Nicole will be devastated by her ex’s choices. Zende ditched Nicole and hopped in bed with Sasha in record time.

Nicole expected Zende to at least mope around for a week or two.

Zende will feel terrible, but Sasha will try to make his pain go away. They’ll hit the sheets again and Zende will forget about his problems. Sasha certainly knows how to provide a distraction.

The question is: can Sasha keep Zende’s attention indefinitely? Stick with “The Bold and the Beautiful” to see where this relationship leads.

So B&B fans, what do you think about the bombshell that’s being dropped on Nicole? Does Sasha really love Zende or is she just focused on vengeance? Will Nicole have a chance to get payback, too?