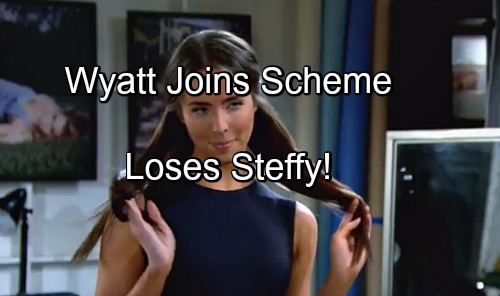 The Bold and the Beautiful (B&B) spoilers tease that Ivy (Ashleigh Brewer) will continue to follow Quinn’s (Rena Sofer) instructions. Ivy wants Liam (Scott Clifton) back and she might as well take her chance. Now that an evil mastermind is coaching her, Ivy could have a real shot with her ex.

Liam is still in love with Steffy (Jacqueline MacInnes Wood), but she isn’t exactly single. Steffy is married to Wyatt (Darin Brooks) and he’s working hard to keep their relationship intact. Wyatt doesn’t intend on giving up and that could work in Ivy’s favor.

So far, Liam appears to like Ivy’s assertive side. Quinn got Liam to fall for her at the cabin. She can surely help Ivy woo her former flame. Of course, it’s apparently not that difficult. Ivy just needs to be Steffy 2.0 and it’s enough to catch Liam’s attention.

When Ivy kissed Liam, he didn’t pull away or grimace. He actually laughed. Maybe that’s a good sign. B&B fans know that Liam has done nothing but mope since he was freed from captivity. He’s been depressed about losing Steffy and tense about getting her back.

Liam was relaxed with Ivy and he genuinely seems to have missed her. When it comes to women, Liam is easily distracted. He can change his mind on a whim. Liam adores Steffy, but what if she keeps dragging her feet? The prospect of a future with Ivy could become quite tempting.

Let’s add another layer to the drama. What if Wyatt figures out what Quinn and Ivy are doing? The Bold and the Beautiful spoilers suggest that Wyatt could take a cue from Quinn soon. That could mean he’ll do some scheming, too. Wyatt might decide that Quinn has the right idea.

Wyatt is determined to keep Steffy as his wife. He’ll do anything in his power to make sure that happens. Will Wyatt try to help Ivy pursue Liam? Wyatt won’t care who Liam is with as long as it’s not Steffy. He just wants his brother to butt out and move on.

Wyatt could end up in big trouble if Steffy gets updates on his sneakiness. She may realize she married someone who can be almost as manipulative as Quinn. Steffy has been trying to hang in there and honor her commitment, but things could change if Wyatt turns to the dark side.

We have to wonder just how far Quinn’s plan will go. Is there a deeper reason for Ivy’s Steffy-ish makeover? Could a drugged or drunk Liam mistakenly sleep with Ivy? You never know. There’s no line that Quinn won’t cross. The cabin ordeal proved that.

Steffy might witness a shocking encounter. Then again, perhaps Steffy will just see something like the night she snuggled with Wyatt half-naked. Liam assumed the worst just as Steffy would if she saw him cuddling in bed with Ivy. Even a platonic moment could cause major backlash.

Looks can be deceiving this week on #BoldAndBeautiful!

Liam comes face to face with someone from his past today! https://t.co/pyntm77r27 #BoldAndBeautiful pic.twitter.com/YpEZ5aehNE