The Bold and the Beautiful (B&B) Spoilers: Quinn Fakes Liam’s Death – Ivy Back from Australia, Shocked by Wyatt ’s Engagement 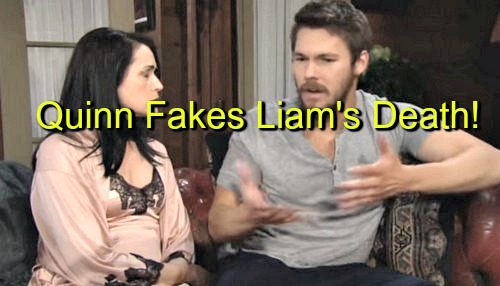 “The Bold and the Beautiful” spoilers tease that Ivy (Ashleigh Brewer) will decide to head back to Los Angeles in an upcoming episode next week. Ivy was convinced that she needed to be in Australia after the proposal debacle. That was a huge mess.

Ivy felt terrible for hurting Wyatt (Darin Brooks) and she wasn’t sure she could stand being around Liam (Scott Clifton) with thanks to her lingering feelings.

Ivy will undoubtedly be surprised when she gets updates on everything that’s happened in her absence. The news of Steffy (Jacqueline MacInnes Wood) and Wyatt’s engagement should give Ivy quite a shock.

Perhaps Ivy won’t feel as guilty when she realizes that Wyatt hopped into bed with Steffy the second she left town. He obviously wasn’t too torn up about losing Ivy.

Wyatt found himself another future wife and Ivy will wish them well. She dodged a bullet if Wyatt moved on this quickly. There’s a good chance Wyatt was harboring feelings for Steffy while he was with Ivy. Of course, Ivy has no room to talk. She was clearly pining for Liam.

Ivy might feel a little more hopeful about the situation when she learns Liam apparently gave up on Steffy. Unfortunately, neither one of them is going to have a shot if Quinn (Rena Sofer) has anything to say about it. “Eve” has fallen for “Adam” and she doesn’t intend to let their love slip away.

“The Bold and the Beautiful” spoilers reveal that Liam will continue to have questions about his life. Quinn will try to provide all the answers Liam needs, but he won’t be satisfied. Liam thinks something is missing and he just can’t shake it. Meanwhile, Steffy will mull over this puzzle. It seems Quinn will be forced to take drastic action to keep her secret under wraps.

Just how far will Quinn go? B&B buzz suggests that Quinn will consider faking Liam’s death. That might be the only way Steffy can really let go. As for Liam, Quinn will keep telling tall tales and hope for the best. Stick with “The Bold and the Beautiful” to watch Quinn work her magic.

So B&B fans, what do you think about Ivy’s return to Los Angeles on a new episode next week? Will Wyatt and Steffy’s engagement news stingg? What about Ivy’s revelation about Liam? Will Steffy figure out what’s going on? Voice your opinion in the comments below and don’t forget to check CDL often for the latest “Bold and the Beautiful” spoilers, updates and news.