The Bold and the Beautiful Spoilers: Quinn Glams Up Ivy To Steal Liam – Scheming Katie Says Ridge Is Love of Brooke’s Life 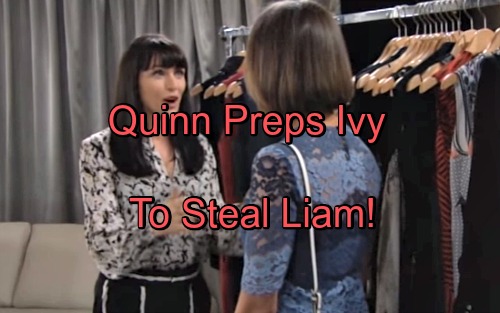 The Bold and the Beautiful (B&B) spoilers for Friday, September 2, tease that Bill (Don Diamont) will try to get through to Brooke (Katherine Kelly Lang). She’s afraid it’s too soon to pursue a future together. Bill just ended things with Katie (Heather Tom) and Brooke doesn’t think he needs to rush into another marriage.

When Brooke suggests they should hold off until the time is right, Bill will maintain that they need to live in the moment. He’s tired of waiting on the life he wants. Bill will indicate that they have nothing to hide, no one to protect and no fears. He won’t see any reason why they shouldn’t tie the knot ASAP.

The Bold and the Beautiful spoilers reveal that Brooke will accept Bill’s proposal at some point. It appears Bill will wear Brooke down. Of course, Brooke still has her eye on those Forrester shares. She intends on carrying out a hostile takeover with Ridge (Thorsten Kaye). Marrying Bill might be the only way to secure the shares and pull it off.

However, Katie (Heather Tom) will rev up her matchmaking efforts to stop Brooke from moving forward with Bill. She’ll want Ridge to understand that he has a lot to lose. Friday’s B&B preview shows Katie saying, “You’ll always be the great love of Brooke’s life. EVERYONE knows that. The question is…will the two of you accept it?”

Brooke certainly has plenty of history with both Ridge and Bill. She was pining for Bill before their affair began, but she’s been reconnecting with Ridge lately as well. Ridge might start to believe that he truly belongs with Brooke. Plus, the idea of defeating Bill will probably prove tempting.

Meanwhile, Quinn’s (Rena Sofer) new scheme will officially kick off. Ivy (Ashleigh Brewer) has joined “Team Quinn” and she’s ready to serve. We don’t know for sure what Quinn has in store, but it’s clear that she wants to save Wyatt’s (Darin Brooks) marriage. In order to do that, Quinn needs to keep Liam (Scott Clifton) away from Steffy (Jacqueline MacInnes Wood)

Quinn will decide that the first step involves Ivy’s look. In The Bold and the Beautiful preview clip, Ivy and Quinn are standing by a rack of clothes. Apparently, it’s time for a sexy makeover. Quinn will state that Ivy is getting a much-needed upgrade.

Is Quinn hoping to glam up Ivy and make her catch Liam’s eye? Liam is completely devoted to Steffy, which means this plot is going to be an uphill battle. Nevertheless, Liam has always been quite a waffler. It’s possible that he could fall for Ivy if Steffy drags her feet long enough.

Still, Quinn’s plan sounds awfully risky. There’s a good chance that this strategy will backfire. Steffy usually only wants a man when she fears he’s moving on with someone else. If Ivy is trying to woo Liam, it could actually make Steffy fight for him.

Regardless, Wyatt rarely comes out a winner at the end of Quinn’s schemes. Will his losing streak continue? We’ll give you updates as more news comes in. Stay tuned to B&B and don’t forget to check CDL often for the latest Bold and the Beautiful spoilers, updates and news.