The Bold and the Beautiful (B&B) Spoilers: Quinn Panics, Traps Liam and Wyatt in Cabin – Brothers in Danger! 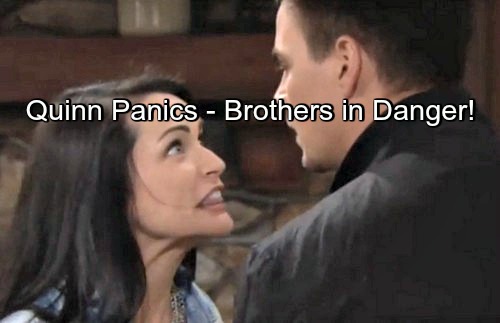 “The Bold and The Beautiful” (B&B) spoilers reveal that although Liam Spencer (Scott Clifton) has been a positive influence on Quinn Fuller’s (Rena Sofer) behavior, her claws will come out and she’ll turn on both Liam and her son Wyatt Spencer (Darin Brooks) to save her skin.

Wyatt was floored to find Liam at his mom’s cabin the day after he married Liam’s fiancée Steffy Forrester (Jacqueline MacInnes Wood). This whole situation is a mess. There’s no way Quinn can justify Liam’s presence to Wyatt – she’s been caught red-handed.

And even if Quinn could talk Wyatt into going away and forgetting what he saw, the problem is now Liam. Liam’s memories will come back in full. He’ll remember Quinn taking him from Forrester and stashing him at her cabin.

No, she didn’t knock Liam out and drag him away like a “traditional” kidnapping but she’s tricked him into staying, lied about who he was, and defrauded him about who he is. Once Quinn knows there’s nothing she can do, no lie she can tell to shut this down, she’ll panic.

Quinn’s basic instinct is self-preservation. We saw a bit of her story while she told Liam about her past – the whole abused and neglected child thing. We’ll see Quinn go to that dark place in her that protects herself at all costs – and she’ll turn on her son and his brother!

We saw on the recent B&B episode that the outside of the cabin has a padlock on the door. Will Quinn make an excuse to go to the car and lock Wyatt and Liam inside? From there, she can disable Wyatt’s car and take off in hers so the brothers are trapped at the cabin.

But will Quinn do something even crazier like set a fire outside the cabin? Would Quinn put her son’s life at risk to save herself? Even if Quinn herself doesn’t set a fire, could one break out? It’s wildfire season in California, so there’s a chance the brothers could be in serious danger.

B&B spoilers reveal that Liam and Wyatt will have to work together to get out of their predicament. But are they trapped – or will they be trapped and in danger of losing their lives? We’re also wondering when Deacon Sharpe (Sean Kanan) will show up.

Will Quinn trap the guys at the cabin and think she’s gotten away free and clear only to find that Deacon is back for revenge? Let’s hope that Deacon is lurking, watching and waiting on the perfect moment to spring a trap.

It looks like Quinn could end up behind bars soon for not only stealing Liam away but also for trapping Wyatt and Liam – and for trying to kill Deacon. Is Quinn going away for good? That’s enough crimes to see her spend the rest of her life in prison!

The only thing that might save her is if she’s pregnant with Liam’s child. That could get Wyatt and Liam to back off pressing charges against her – but Deacon may still be an obstacle. Will Quinn run away and be off the character canvas for a while?

We’ll know soon enough whether Quinn can evade justice for her actions. Although we hate to admit it, we hate to see the end of “Adam and Eve” – they were amazing to watch even though it was so uncomfortable to see things evolve between them.

Share your comments below on Quinn’s escape plans and be sure to check back with CDL every day for more “The Bold and The Beautiful” spoilers, news and more.