The Bold and the Beautiful Spoilers: Quinn Thrilled by New Powers, Protects Eric – Steffy Pouts and Sulks To Wyatt

BY Heather Hughes on October 11, 2016 | Comments: one comment
Related : Soap Opera, Spoiler, Television, The Bold and the Beautiful 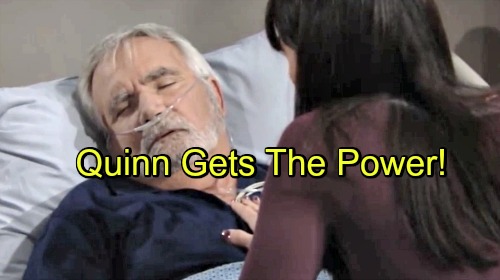 The Bold and the Beautiful (B&B) spoilers for Tuesday, October 11, tease that Wyatt (Darin Brooks) will stand up for his mom. He’ll maintain that Quinn (Rena Sofer) is a changed woman and there’s nothing to fear. Ridge (Thorsten Kaye) won’t believe that Quinn is capable of doing the right thing. He’ll be convinced that handing over the power of attorney will end in disaster.

Elsewhere, Steffy (Jacqueline MacInnes Wood) will gripe about Quinn’s influence. Tuesday’s preview video shows Steffy snapping, “She has control over my father, the company, my grandfather…and once again she has control over my marriage.” Liam (Scott Clifton) might point out that Quinn is always going to be an issue if Steffy doesn’t get out of this relationship now.

Steffy will confront Wyatt about stepping forward and giving Quinn more power than ever. Wyatt will feel like it wasn’t their choice to make. It was Eric’s (John McCook) decision to put Quinn in charge and he expected his loved ones to accept it. Wyatt will urge Steffy to understand that and move on.

The Bold and the Beautiful spoilers say Steffy won’t think Wyatt should’ve gone against her. She’ll insist that Quinn has ruined her life and their marriage. Wyatt will fire back that the success and failure of their marriage has nothing to do with his mother. If they can’t work through their problems, it will be because Steffy isn’t willing to fight.

Of course, Steffy’s feelings for Liam could have something to do with it. Perhaps Steffy has been looking for a way out all along. Still, B&B buzz hints that Steffy might be willing to hang in there a little longer. Stick with the CBS soap to see what lies ahead for Steffy and Wyatt.

Meanwhile, Quinn will be on cloud nine. Now that she knows she has Eric’s power of attorney, big changes are coming. Ridge certainly won’t be ordering Quinn around anymore. Eric can have Quinn by his side just like he wanted. Quinn will excitedly declare that they’re never going to be apart again.

The Bold and the Beautiful spoilers reveal that Quinn will return to Eric’s room with updates. He’s unconscious, but he did wake up briefly to call out for his love. Quinn realizes that Eric is still with her and she’ll do everything she can to get him back to normal.

As Eric rests in bed, Quinn will place her hand on his chest. She’ll state that Eric is safe with her. Quinn will make sure that Eric’s wishes are followed, but that could cause major drama for the Forresters. They’ll all be worried about the stunts Quinn might pull.

Will Ridge come up with a new strategy? Will any of Eric’s family members start to soften toward Quinn? Time will tell, but B&B undoubtedly has some surprises in store over the next few weeks. We’ll keep you posted as other news comes in. Stay tuned and don’t forget to check CDL often for the latest Bold and the Beautiful spoilers, updates and news.

The lovely @RenaSofer takes a walk down memory lane at the #CBSDaytime #1for30 years exhibit pic.twitter.com/MLC7857yG9