BY Heather Hughes on January 14, 2016 | Comments: one comment
Related : Soap Opera, Spoiler, Television, The Bold and the Beautiful 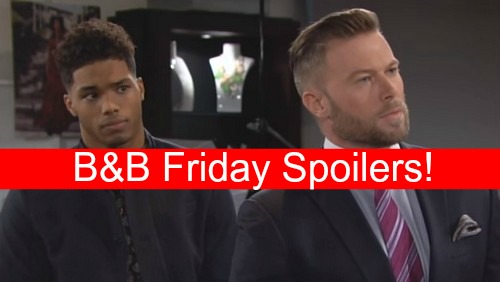 “The Bold and the Beautiful” spoilers for Friday, January 15, tease that Rick (Jacob Young) will deliver some devastating news. Sasha (Felisha Cooper) will learn that plans have changed and it doesn’t look like things will work out for her as a model at Forrester Creations.

Zende (Rome Flynn) will be upset at the way Sasha’s dreams have been shattered. He’ll undoubtedly try to comfort Sasha if he can.

Sasha will be confused about where she went wrong. After all, Rick was singing Sasha’s praises just a couple of days ago. “The Bold and the Beautiful” spoilers say Sasha will soon receive word that her best friend stabbed her in the back.

Sasha will be furious when she discovers that Nicole (Reign Edwards) is to blame for the withdrawal of Rick’s offer.

However, it appears Sasha won’t give up on her goals. In fact, she might make a new one. Sasha is obviously interested in Zende, but she’s been ignoring her desires for Nicole’s sake. Once Sasha finds out that Nicole influenced Rick’s decision, all bets may be off.

Sasha’s first order of business will be blabbing about Nicole’s betrayal.

Next week, “The Bold and the Beautiful” spoilers reveal that Sasha will give Zende updates on Nicole’s actions. Zende will be stunned that Nicole was willing to stoop so low. He knew Nicole was jealous, but he never thought she’d go this far.

It seems Zende will believe Nicole crossed the line. Furthermore, Zende will realize that Nicole doesn’t trust him. That could be a deal-breaker for this struggling romance.

Nicole, on the other hand, will think she’s just protecting what’s hers. She’ll argue that Sasha could’ve taken advantage of the situation and made a move on her boyfriend. Unfortunately, Nicole’s efforts to hold onto Zende may drive him away.

B&B viewers will be anxious to see if Zende breaks up with Nicole over her deviousness. Stick with the CBS soap to see if their relationship will come to an end.

So B&B fans, what do you think about Sasha’s upcoming beef with Nicole? Will Zende break up with Nicole when he learns the truth? Can Nicole patch things up with Zende or will this completely tear them apart?